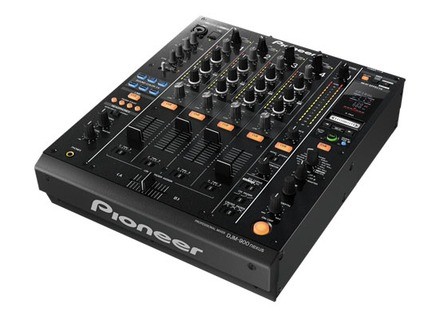 DJM-900NXS, 4+ Channel Mixer from Pioneer in the DJM series.

All user reviews for the Pioneer DJM-900NXS

Pioneer DJM-900NXS
5
Possibility of racker me she is in a stall fly perfectly when it comes to transport.
It includes all the basic connectivity Djm 800, but I find more orderly. The microphone input 2 is found behind more input RJ45 joins the table to communicate with the network turntables and a usb connection on top connected to pc with Abelton or other ... The only downside is that there are more than two phono inputs on channel 1 and 4.
A high quality sound with 96kHz sampling, an A / D converter and 24-bit D / A Converter 32bit.
2 boxes with 6 different effects and color fx beat better effect with more effects including a new table that the x-pad with some nice effects.

Configuration is clean, simple, homogeneous functions with easy use. Everything is done for the dj feel good.
Manual very descriptive and full despite not having special needs.

EQ efficient with a button that isolated, hear nothing when (HI, MID, LOW) are at -26.
No breath.

I use it for almost 2 years now.
Before I had to use the djm 700 and 800 but now it changed a lot especially with rekordbox and quantize function.
The feature I like most is the new effects on the color and quality of the fx fader. Least, maybe a screen too small and having entered a RJ45 network for all mètrent therefore require to have a ethernet router in addition with respect to the djm 2000 or one connects all above.
Pioneer continues to lead quality is nothing to say but can expensive anyway.

I would do this choice with your eyes closed.

DeeGSA's review (This content has been automatically translated from French)" Very accomplished!"

Pioneer DJM-900NXS
5
I would not go back on all that are found everywhere.
It is very comprehensive, it does not lack much ...
The DJM embeds a high quality sound card to enter and exit a computer with Traktor.

The expertise of Pioneer ergonomics!

Since the beginning of the DJM were imposed in the club.
The Nexus 900 brought to the table a very successful.

Whether the faders, cross the sound color FX 6 (excellent), and the box indeed very full.
The band touch the needle search is very effective in live.

I like the type setting talk over the mic's switch with LED is correct, even if the fader was top.

The big plus of this table is the connection network with Rekordbox and CDJ 2000 to synchronize real-time tempo read on Rekordbox (quantize).
The preview of the CUE track computer Rekordbox is appreciable in the evening to cue a track without sending a CDJ.

Used with a front head and RCF sub, the DJM 900 does not equal or tenors AMIX RODEC but has caught the delay on this. The sound is clear, powerful and detailed. Nothing to say.

Combined with the CDJ 2000 with Rekordbox is the ultimate DJ governed in my eyes.
Unfortunately, overpriced, but when you love .....

kimby's review (This content has been automatically translated from French)" Well, but how to save?"

Very good food, but from a mac pro which manages Tracktor 2 live on this table and in pilot 2 CDJ timecode (ie no audio card externetype 8) How can a recording of his qualitée mix by tracktor ago " crackling sound of the mix "for garage band is impossible to recover the sound??? so who has the answer????

frichard's review (This content has been automatically translated from French)" Long live the digital!"

Pioneer DJM-900NXS
5
The console retains the format of its big sister (the DJM800) provided to unscrew the pretty cover on the front.
Settings BASS / MED / CUT FEVER now offer a useful on some styles.
The synchronization of effects makes them "finally" usable. On a personal DJM800, I do not hardly ever used. By synchronizing the result is much better ... it sounds much better.
Dialogue with the CDJ2000 is not bad, I did not like the white lights that clignotées end pieces, it m'éboulissait ... now in red, they bother me less.

Like any DJM in 5 minutes we are ready to make an evening ... for the effects, it is more practical course. But it is also the goal of having a toy on which to spend a few hours to master.
All features are accessible and useful, but I wish the meters more responsive. Dificil to wedge a piece with the table without a headphone, though I arrived very well with my previous table.
I will connect to the PC (Rekordbox) this weekend, I would complete.

I find the sound less than a round table analog, but it must be admitted that the sound output is very good and remains good when you push hard!
Equalizers are very effective and play their role perfectly.
As against some effects are either too high or too low ... it's a shame (can be corrected by firmware)

Cons:
- The proposed filter effect: far from the quality of analog filters in my previous table. The apps are better, it's serious at this price.
- The headphone mix based on the output level after the Gain control.

The configuration gnrale Is it easy? Trs simple especially if you leave a Pioneer.
The manual is clear and sufficient? .. I did not open
The usual functions are they easily accessible? All hands on as each djm.

The table is a team isolator which cuts completely frquences, trs INTERESTED missing a lot on the 800 by exemple.J 'have not heard of breath, I find it more punchy in low APRS I use my home so I too back on a.

I use it for 15 days.
Various BST, Gemini, Numark, Djm500/600/800.
I like this table for the effects, if they are utiliss correctly, allows mods xpad pretty cool on the sounds, the reverb is finally correct, the compatibility Traktor justify the price for me, the djm 800 approached of this award also its release, when comparing it to competing in the moyenne.Je remake that choice, it's on to me the effects in a table is important and so far, there's nothing made by Pioneer, which also offers a good compromise.

houselover83's review (This content has been automatically translated from French)" terrible"

Seamless integration software traktor is the branch of usb drives mac and everything!
is the ball, plus a sound card plug in, just select the usb 1 / 2 for the software, and recognize the timecode cd or phono.
Just one small problem, however, we must calibrate the timecode''before''the source of this servire cd or phone, or it must be kidding and redemmarrer traktor ...
Or no latency with the integrated sound card, the effects pioneer always on top, with a super + + + more effect 'gate'. Really huge.

Ben quite surprised potato of the beast, having mixed on DLM 800 I found the sound too''cold''.'s No problem, I like not even touched on the equal of the system.
it's clean.

A notice will say very positive for the pioneer, as the 800 did so, so much the 900 and the table for a club, or those who want to control TSP2.
Everything is in place, it is not lost for use ...
Apart from the price I see nothing negative.

The general configuration is simple-it
Yes

The equalizer is it effective?

This time really surprised, because I just finished a xone 42 and the equalizer in the djm 900 in isolator mode completely cutting frequencies, just missing a bit of fishing in the bass but otherwise nothing to say .... super

For how long have you been using it?
1 Weeks

Did you try many other models before getting this one?
Yes a dnx 1500 a Xone 42

What thing do you like most/least about it?
LE +: Look, the sound quality appointments, box has indeed impressive with the system that quantize block the effects of the bpm sounds.

The -: it is neither a force behind rj45 taken to a hub

What is your opinion about the value for the price?
It is expensive but the purchase is for the long term ...

Knowing what you know now, would you make the same choice? ..
I absolutely wanted a quality restaurant with good effects and I'm not disappointed .....

holq's review (This content has been automatically translated from French)" Pioneer improves, but too expensive price 300/400euros"

24 bit, but good to be realistic the 32 bit is useless for now.
Even the 24 bit second flight is seldom as a real digital system price of your folly and it would take only Beat WAVE 24 bit. and not by download mp3 ...

Equalizer is effective.
Pioneer has since corrected the defaults DJM 2000.

The pros:
DJM 800 with improved sound quality better.
Now kill the well when it has knobs-DB.
Faders & knobs are solid.
The effects perfectly synchro to music with the quantizer
100% tractor ready.
Best selection of Effect & Intant FX.
X simpas pad.
THE -:
Fader slower than the DJM 800
Printing plastic touched the first 5 minutes, I do not know why.
Enfaite but when we took her mark in 30 minutes mix, Ont know it's solid
And we do pe madness with the cross.
Price
PROPOSED table: DJM 800, DJM 2000, DJM 400, Rane ttm57 SL Xone42.
I recommend this table.
Dsl fautes.Texte in rapidos