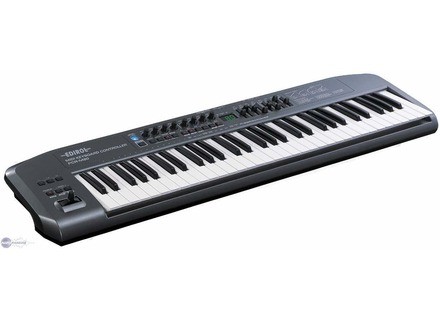 PCR-M80, 61-Key MIDI Keyboard from Edirol in the PCR series.

Edirol PCR-M80
1
I've been playing for 37 years in rock bands, improvisational groups, and at home. I like any music that is not strictly commercial, that attempts to make contact with the listener.

I bought it online about three months ago. I'm not sure who sold it to me. I paid the going price for it, whatever that was.

IT has eight sliders, eight knobs, and eight buttons for real time midi control, along with the 61 key keyboard and jacks for a sustain pedal and an expression pedal.

Every key in the second octave is problematic. Three of them don't work at all, the rest work sometimes, or when they are pounded really hard. Sometimes touching a key lightly produces the maximum velocity and what should have been a delicate little ghost note explodes in the middle of a phrase.
It is EXTREMELY frustrating to attempt to play this piece of junk.

IT looks well built and would be a very good piece of equipment if the darn keys worked when they were pressed.

Avoid it at all costs. It will only break your heart, and you will be tempted use a hammer on the non-working keys, which may lead to unjustified feelings of guilt on top of the feeling of stupidity at having bought it in the first place. Maybe they made some good ones, but mine sucks.

crazymoog's review (This content has been automatically translated from French)

Edirol PCR-M80
3
It is the instrument that we must have if available may have to place it on pocde potentiomtres interesting addapt or USB power. a choice made for pedals; expression and hold. Trs interesting to play the synth.

It's a beautiful remake by roland keyboard, the keys are mcaniques meileur quality of the Previous models. Unfortunately the keyboard key lgrement are too small to make accrobacies piano and the race is also of note is a short. "The crazy keyboard will understand me." It remains even when a good keyboard if the environment were looking for a compact and inexpensive. Difficult for pianists to play.

I just bought the like ct's compact, it is a good quality price.
Good for beginners or experienced with difficultsa play the piano.
Did you find this review helpful?yesno
»

tleroy's review (This content has been automatically translated from French)

Edirol PCR-M80
5
My goal silent use as a surface CONTRL to play around with Reason and other ... And as long as I wanted to touch type Roland enjoyable.
The reliability of the product Obviously its importance

The touch is super enjoyable, that's what I was looking (I was expecting even less).
plutt easy to use I have used the record that from the time I blocked really.
I still does not operate south of slction way ahead.
For those who complain of the manual book in English, look in the directories to install the driver, there is the manual and well translated in several languages ​​(PDF), it is plutt well.

I've had a little over six months, I'm really happy with this choice, for some, a desire to give to the piano.
I prfre, touch trs cool, and its potential even if I still does not operate.
J'apprcie well as the feeling of solidity at times I attack the keys a little strong PPRE and does not flinch.
Nothing I Drang, except that I'd like the keys a little longer, but that price should not RVer.
I test MODELS 4 or 5 in the same price range is my prfr.
Report QualitPrix INTERESTED, I offer the benefit of a Music Store in the vicinity of 200 Euros.
At this price, I repeat the same choice tomorrow without hsiter.
Did you find this review helpful?yesno
»

jukap's review (This content has been automatically translated from French)

For the opinion below, do not confuse the PCR series (bugs, dead keys, etc ...) and PCR-M (new models much more reliable and better designed)!
Did you find this review helpful?yesno
»