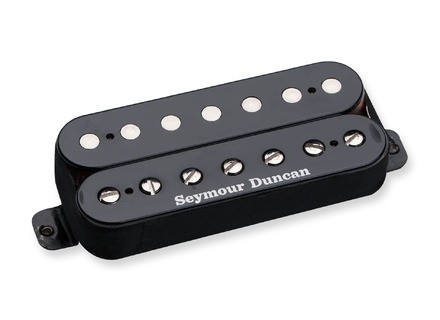 Seymour Duncan SH-4B 7 string JB Model
3
The Seymour Duncan JB is one of the most popular pickups offered by them.  Put this in just about anything and it will really wake it up. There is no wonder why so many guitar makers put these pickups in their guitars. From ESP to Jackson you can find models that use the Seymour Duncan JB usually paired up with its buddy the Jazz in the neck. It can do just about anything but when they made a 7 string version of it they are really pushing the design beyond its limits. The pickup does not have the low end response needed to work well in a 7 string guitar. The JB is more at home in Les Paul type guitars. The vintage voicing in this pickup is what makes it not good in the 7 string guitars.. The low end on this pickup has a bit of sag to it. This is what you want when you want an old school sounding pickup. You want something that sits well with a nice old combo and works well for your blues licks. With a 7 string pickup you want something with super output but super tight low end. The JB has decent output but the low end isnt nearly tight enough for a 7 string. There arent many 7 string players looking for vintage tone. 7 string players want a aggressive razor sharp tone for their aggressive razor sharp riffs. Because of the loose low end a good application for this pickup in a 7 string would be if you had a super bright guitar like something made of all maple or a similar wood. If you have a 7 string and are trying to tame the high end for some reason this pickup could do that fairly well. For 7 string and extended range applications I would strongly recommend a set of active pickups. Most passive pickups being old school or traditional in design are not designed to handle the frequencies extended range guitars put out.
Did you find this review helpful?yesno
»

Seymour Duncan SH-4B 7 string JB Model
4
The Seymour Duncan JB is, without a doubt, the most popular pickup in the Seymour Duncan lineup. It has been one of the pinnacle pickups in the ‘80s, and it’s still extremely popular today, so it should be no surprise that they made a 7 string equivalent. It features slugs on one coil, adjustable screw heads on another, four conductor wiring and an Alnico 5 magnet.

The low end on this is fairly vintage sounding. It’s not terribly tight, but and since this is the 7 string model, it has a bit of a problem dealing with very low tunings. However, it can generally work for most applications. The midrange is a bit “stringy” at times, and the treble has a bite to it. This helps it really cut through the mix, and it generally doesn’t get too harsh. Split coil and parallel tones are great, too.

I find this pickup to sound best in mahogany. Most of the time, when I try it in alder, it sounds a bit too bright. However, it totally depends on the guitar in question. In one of my alder bodied guitars, this pickup just screams like crazy. It’s really a pickup you have to try for yourself to see if you like it, and be sure to spend some time with it adjusting the pickup height. Some people use the JB in the neck, and while it does work, I find there are better pickups out there for the neck.

Given how popular the JB is, it’s worth at least trying one time in your life. They’re so plentiful that they’re very cheap on the used market, so there’s no reason to avoid it. If you don’t like it, just sell it or maybe swap in a ceramic magnet to have a baby Duncan Distortion.
Did you find this review helpful?yesno
»

Seymour Duncan SH-4B 7 string JB Model
4
I use it for 1 year and a half on an Ibanez RG1527z.
I have not tried many model before except Ibanez pickups original, but I could test dimarzios 6 strings on a guitar before.

Being very satisfied with the TB4 on my ESP Horizon I wanted to test on my Ibanez.
I wanted a versatile microphone that is what I had as I hoped.

Distortion in this mic is pretty good, even if not really excels in the most violent books / extremes, micro grain has a very nice and I also use it in almost distortion.
In clean on the other hand I find it really on top, this is where we feel that a microphone can be a little too much treble (fortunately Ibanez is not too high) and more it has an unfortunate tendency to saturated when you attack a little too hard the strings.

With experience, I do not think that choice again, I think it is more me not micro too, I love its versatility but hey who said said micro versatility good for almost everything but, whatever the case n ' not excel.
In short, this microphone is very good but lacks personality.

xutos's review (This content has been automatically translated from French)

This is the 7-string version of the famous MODEL "Jeff Beck" in the catalog since trs long and one of the most sold, it is more reputable to do!
Otherwise it has its mdiums juicy but also a good capacity to bring out the harmonics of a single shot pulp distortion.
it saturates bcp ... more than his "jeff beck", if the DSIR with a trs good sustain.
It's a microphone distortion and crunch, but the clean sound are superb, can be more or splitter to parallle with a switch.

This is an excellent micro happening everywhere, trs versatile. A great success is balanced sound.