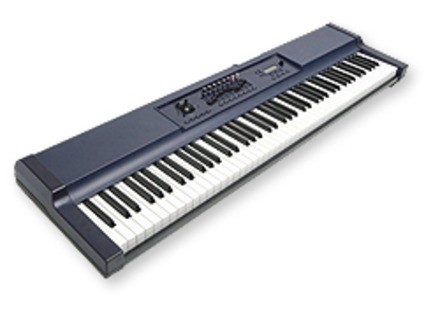 Fatar / Studiologic VMK-176 Plus
4
It's supposed to be a MIDI control keyboard, but it's far from the master keyboards of the '80s.

In terms of the "weight" of the keys, the VMK is between the UF80 and the FP-3. And it's probably the one I prefer (heavy enough, but not too much), excluding the Kawai MP10 (far better than the rest) and the RD700. They are very different products.

The controller part is within current standards, which means it's mediocre, not particularly complete and it doesn't cover all usages...but it does its job and can come in handy. Every fader/pot/button can have its own MIDI channel (which is quite standard). I use it mainly to control the faders of my soundcard (Totalmix FX in Mackie Control mode), but I'm forced to use channel 16 for keyboards. It's also okay to control virtual synths and organs (but it lacks memories).

The quality of the keyboard (GH) and its overall sturdiness make up for the rest (and justify its price). In fact, it's fine for studio/home studio, but certainly not for onstage (no split, no transposing on the fly, no zones, it's heavy, etc.).

Keyboard:
+ It's a Fatar TP40GH (Graded Hammer), so it has weighted piano-like keys with (switchable) aftertouch
- Aftertouch hard to trigger (which is quite normal), unlike the PC3LE6 (TP8)
- 1 keyboard zone only (without even a split mode), however it has 2 MIDI outs...
- No dedicated transposition keys (you can transpose but have to switch to edit mode with two validation stages...)
- The sample bank key switches aren't often poorly adapted to the 76 keys, which is often a real pain.

Physical controls:
+ 9 faders (with programmable polarity) so you can simulate organ drawbars
+ 3 pedal ports (with switch or expression mode support)
+ The polarity of all controls can be inverted
- No fader / button / pot banks
- The LCD doesn't display the parameters (when you engage them)
- Cheap and noisy buttons
- Pitch/modulation joystick (Korg-type), I don't like it and it's awkwardly placed
(I prefer modulation wheels that don't return to the central position, although the joystick is more fun for pitch), the best would be to have both.

Functions / Design and usability:
+ Learn mode to assign functions (you move the control, it's detected, and you can then edit it)
+ 1 USB port and 2 MIDI Out ports (handy) ...
- ... but these 3 ports are mirrored
- The overall management is nothing to write home about, be it for:
- The saving of parameters and presets (in two stages with validation every time)
- Exporting to a PC (you have to press the PC button then choose the PC number and validate, it doesn't have simple +/- buttons)
- Limited number of memories (30)
- No sysex send nor memorizing (although it's very uncommon nowadays, too)

The USB port can feed the keyboard and it's automatically recognized under Mac OSX.6+ and Windows 7 (I haven't tested it with other OS). A PSU (with universal US, UK and EU adapters) is supplied if you don't want to use it via USB.
Did you find this review helpful?yesno
»