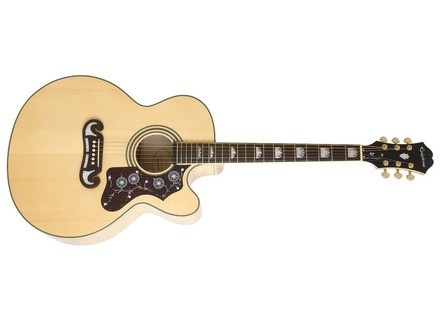 EJ-200CE, Acoustic-electric Folk/Western guitar from Epiphone in the EJ series.

Product replaced by the Epiphone EJ-200SCE.

View all offers for Epiphone EJ-200CE »

franssoua's review (This content has been automatically translated from French)" Nickel!"

Strong point for the exemplary finish.

handle really nice, I who used to play on a gibson les paul handle unvarnished, I feast on that of ej200ce.

it is late, the varnish will not stick.

Good ergonomics even if it is really big! small jigs or the girls will be trouble, so to try.

access to acute facilitated by the cutaway feature of the EC.

and well it's really the feet! well as acoustic with a pick, fingers in the volume is lower but the sound is good.

So it's just plugged in for this great price. some reverb, a little bass and guitar sends a crystal clear sound.

Recently purchased, as soon as I get more plays on it to stop, I have other guitars including the top of scales (les paul) and I enjoy playing the same on both.

What I love most: his incredible look (top finishes) and the sound quality when plugged.

the least: not supplied with hard case, I know the price need not ask too much, but the case seems to me essential for a jumbo of this size.

I put in eight overall I think she deserves it, especially with the massive table which is still a big plus for sound and long life.

Traumatic's review (This content has been automatically translated from French)

Epiphone EJ-200CE
4
as everybody knows, is the Epiphone branded gibson, that they are all manufactured in Korea from now!

The Epiphone EJ-200CE has a spruce top, the body of the guitar is maple and the neck, the keys are rosewood, the nut is plastic and the mic / preamp is a good Sonic 2 epiphone invoice includes a tuner diode has 3 positions (NANOMAG / bend / Nanoflex) and 2 equalizer, phase 1 button, 1 button tuner, volume and a wear indicator cell in short it is complete and have it tested connected we have a good range of good quality sound!
the mechanics are Grover bath oil, acastillage is gold!
Chevallet is the type "mustache"

the handle which includes 20 boxes with the benchmarks reversed pineapple is nice to play (it necessarily includes the same features as its big sister, the Gibson J-200), access to acute is easy because you're on a guitar with pan cut!

I advise against small jigs (-1.65m) because it is a big guitar Super Jumbo shape with a thick body!

as I bought OCCAZ with old strings, they already sounded pretty good but were not exploited its potential with a half rope rusty, so I mounted Elixir (phosphorus Bronze Custom Light 22 32 November 15 42 52) and is the revelation!
it sounds serious with good deep bass and treble crystalline (I compared the Gibson J200 has a buddy, you're not in the same record but for a guitar sound 10 times less expensive that it is doing more honorably)
this guitar is not typed for a particular style, it's versatile, can play blues, pop rock and even the picking!

with a mini home studio, I have not tried it on an amp, but live on my monitoring speakers, the sound is clean!

I use it for several months, and although I intend to invest in a Gibson Songwrtier standart Deluxe Cutaway, I do not sell it, because a guitar is 250 € which sounds as good with a sunburst finish and cutaway, I no better!

the feature I like least is that his case is voluminous, but the cons by its strength, because with such a case it sounds good with good bass!

I would do without hesitation that choice, I never found both in this price range!

18 of 18 people found this review helpful