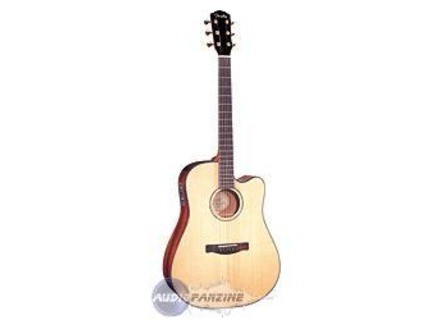 Fender GD-47SCE
5
Purchased new at Bryan's House of Music for $700.00 (MSRP $950.00). I checked out several other acoustic-electric cutaways, in the store, and this one sounded better than any of the others in the price range. It's workmanship was also superior.

The guitar has a good, balanced tone when unplugged. It's not a Martin, but it does sound better than most acoustics, and better than any other acoustic-electric cutaway in it's price range. When plugged in, however, the sound quality really stands out. It sounds incredible, even on my Peavy electric amp. The amp I tried at the store was a Fender Acoustasonic Jr, and the guitar sound was truly awesome. The electronics are Fishman, and though not the highest end (like a mike/pickup blend you get on a Martin), they are quite good. The action is not as refined as a Taylor, since the design tolerances on the neck are more a "production" type. I play a 79 Les Paul Custom, and I know how good action can get. I'd say the DG-47SCE has good to excellent action. The intonation is excellent. Any chords played up the neck, or chords played with a capo on, say, the seventh fret, ring true. It's one of the guitar's better features. Lastly, I really think the GD-47SCE is a beautiful guitar. It's much prettier in person, and the rosewood used for the back is beautiful (as is the rosewood laminate on the sides).

There really isn't anything I don't like. There are some things that would make this a better guitar, but those things would also make it a $1500.00 guitar (on a good-deal buy). For example, a real mahogany neck instead of nato would up the guitar's worth, as would solid rosewood sides. However, the nato neck and laminated sides don't affect the sound or playability to any noticeable degree, so it's value-for-the-money issue. One thing that would really make this an outstanding guitar, to me, is if they would have used ebony on the fretboard. But hey, rosewood is fine (especially if you prefer it). Anyone who wants all this stuff, including the afore-mentioned higher-end electronics, should buy a Martin DC-16RGTE or a Taylor 410ce ~ for about $1400.00 at Guitar Center. The point being that you get what you pay for. If you want a great acoustic-electric cutaway, and want to spend under a thousand bucks, the Fender GD-47SCE is by far the best thing out there. Given it's price, there is nothing I don't like about this guitar.

Here again, it's not Taylor, or Larrivee, but it's not your typical foriegn made either. I would defy anyone to find a better made "import." There are a few things inside the body that could be "cleaned up" but outside, I cannot find a single thing wrong. The beautiful tortise binding and headstock overlay are top-notch construction, as is the abalone rosette. And here's a real plus: Gold plated Grover tuning keys (the best). The gold Grovers and the inlaid Fender logo on the shiny black overlay, make the headstock really attractive. The AA solid spruce top is not perfectly bookmarked on mine (sheen, not grain), but I prefer it that way. Very, very good workmanship on this guitar.

This guitar beats any other acoustic-electric cutaway in it's price range (and beats some $1200.00 makes as well) hands down. But if you put aside the value thing, its simply a very well made, beautiful looking, excellent sounding, and very playable guitar. What more could you want? I would definitely recommend this guitar, as I can't imagine anyone not appreciating it.

bigor 30's review (This content has been automatically translated from French)

Fender GD-47SCE
4
Guitar made in Korea finishing treated.
The neck has 20 frets rather greenhouses.
It is equipped with a pre-amp Fender Fishman Classic 4, Classic connector jack, no MIDI ....

The fineness of the handle-reminiscent of the stratum-level allows the player to intermdiare daring new compositions .... The gloss gives a classic touch.
Ergonomics and gnrale quilbre of the instrument are excellent.
Its weight would play in his dfaveur ... but ... when everything is massive!
The bass is deep and sparkling high end. The sound is excellent and gnrale you will be surprised that the new agreement come to pass.

To the sounds of folk, nothing can be wrong. In picking or support the bte keeps its promises.
I test the amp for "electric" and got a little gat ... but nothing but normal trs.
However, it is a pleasure on my V-AMP2!

I am the proud Owner 'for a year and I can not get enough. Whether it's natural (which n'arrte not to improve) or from the comfort of j'prouve game with this guitar, I try to spend at least an hour a day.
In the price range of 1000, I had tried a lot. APRS limin have guitars that are not returning enough I got low, or those whose handle tortured me after 5 minutes, the choice was restricted two guitars. I prfr the seller of the Fender and so far I have not regretted my choice.
I had to try to profit from high-end trs (Martin and Gibson), but I think that the modest price quality ratio suitable trs.
Did you find this review helpful?yesno
»