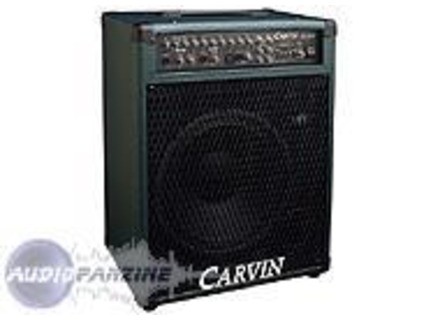 i was looking for the absolute best amp for my classical guitar.many amps have small speakers and do not provide the warmth needed for nylon.i narrowed my choices down to carvin,swr or a p.a. system.carvin offers a tweeter that has a volume control.i roll this back for my nylon and turn it up for my regular acoustic or electric.carvin has built in effects(reverb,delay,chours,flange),is light,3 chanels,can play 3 different instruments at once with independent effects on each,can play bass through it.sounds great with all.

i damaged the speaker playing slap bass through it after only 2 days of haveing it(carvin manual said to really get on it to make sure i liked it or i could send it back)and customer sevice would not replace the speaker.they were unsympathetic.they had an attitude like'as long as the check cleared,your on your own'.i could have sent it back but it truly is a great amp.so the amp is somewhat fagile in tha respect.also the contol knobs are plastic and long and could snap off.

as far as i can tell its structurely sound.the grean covering could have been insalled better.theres gaps where bear would shows.and the grill that protects the speaker is made of plastic.probably to reduce weight.casters are plastic also.

the amp sound great.and i tried all the amps.this amp is also more versitile than the others but they cut corners on the construction to keep the cost down.i wish customer service was more helpful.if carvin would have replaced my speaker i would be even more happy about the amp.

Carvin AG100D Acoustic Combo
4
I purchased the amp new via phone order from Guitar Gallery in TN. I feel like I got a pretty good price @ $425 after shipping.

Great sound, very transparent. Easy to use. The direct out is very useful and appropriate - someone was using there brain! A shape switch makes an automatic boost to treble & bass while pulling down the mid. And a built-in notch filter is handy in helping to reel in feedback. There is also an effects in & out and an unbalanced output for combining the amp to another speaker. Last, but not least, it's very quiet in comparison to its competitors.

Let me start with the front of the amp. It has only a cloth-like soft material to protect the speakers. I don't know what affect a metal grill would have on the sound, but it sure would make it more roadworthy. It's a bit heavy, but hey, what can you do. I would have enjoyed seeing two things added : 1) a built-in system that would allow the amp to lean eliminating the need of getting a seperate amp stand, and 2) If the front needs to be cloth to preserve the sound quality, I would have liked to have a removable cover for the front of the amp. I think this could have been easily accomplished using latches.

Seems to be durable, but not necessarily for the road. In a home or studio, I think this amp could last years if taken proper care of. It has a very simple look, which I prefer, and the placement of knobs & controls seem to be in a good out-of-the-way location.

I'm very impressed with this amp. For it's price range, I don't think you could do better for an amp dedicated to amplifying acoustic instruments. However, if I could go back and do things differently, I might choose to go with a powered speaker by either JBL or Mackie because of the added capabilites it would give me. But I have no regrets about buying this amp for amplifying my acoustic guitar. A + piece of gear!

Carvin AG100D Acoustic Combo
5
As you probably know, Carvin is a catalog only music company, so I ordered it from their catalog. I pain $499 for this little baby.

I like almost everything about this amp. It's marketed as a dual acoustic guitar and mini-p.a. amp. Usually, claims that the amp can do more than one thing are exaggeraged. But this time around, they were right on the nose. It's has enough e.q. to make my vintage 12 string guild sould great, and the mike channel is clean, bright, with just enough depth. The effects are fun to play with, but other that some chorus on the guitar, and some delay and reverb on my voice, I havn't' used all the effects toys. At 100 watts, I have enough power for a single or duo. I am also a public school teacher, and I used this amp in a high school auditorium, and was surprised that it filled the room with plenty of sound. I am not a high volume rocker, but I was still surprised at the power this little box had in the auditorium.

The only thing, and I mean the only thing that I don't exactly like are the little knobs on the controls. But basically it's a little thing that is no big deal.

Looks great, has a winter tweed color and has already been through its "virgin" drop off a dolly. Survived with no problems other that a little scratch.

This is simply a great acoustic guitar mini-p.a. combo. For gigs that aren't high watt ear blasters, it's perfect. My friend is going to try plugging a pod into it and miking it to try to get some depth to the somewhat "electronic" sound that modelers get. I think that it will be perfect because it's so clean, it won't color the sound, simply produce it. This is a sweet little box that makes some clean, pure sounds, and looks good in the process.

Carvin AG100D Acoustic Combo
5
Like all Carvin products, I ordered this directly from the catalog. I pain 490ish for the amp.

At first glance, the unit looks good. It doesn't try to copy other amps; its got a look all it's own. It comes in a green that is a nice break from the black or tweed that most other amps are. Also, it sounds great. I took it our of the box, got out my mike, and my vintage Guild twelve string, plugged in and was blown away by the sound. I had a Fender Acoustasonic and sold it because it was way too top heavy. The Carvin was just right. Both my guitar and the vocal was both clean and had a depth that went way beyond my other amp. The twelve inch speaker and the tweeter cover the bottom, middle, and top quite well. Also, the effects were not only a lot of fun but sounded superbly. The delay on my voice was an added effect that I really had fun with. Both the reverb and the chorus on the guitar sounded nice. I have had the amp for four months now, and I am still not out of the "play around" stage. Also, the amp was a great monitor when I used a friends Peavy sound system.

So far the only thing about the unit I would change it the knobs. They are rather small in diamemter. They look high tech and cool, but are a bit of a drag to mess with. However, that's really not that big of a deal. I think Carvin might change the knobs, because I suspect I am not the first one to make this observation

So far, other than a one nighter out, the rig has stayed at my house. So, it's a bit too soon for me to give a road observation. However, it did get dropped off a dolly, and if my friend hadn't told me, I never would have known.

All in all, the Ag100 is a great little acoustic/p.a. amp for a small to medium room. You won't break any eardrums with the amp's 100 watts, but you will get an amazing amount of clean, clear, crisp sound. If mine got stolen, and insurance gave me a check, I would buy this baby all over again.

This review was originally published on http://www.musicgearreview.com
Did you find this review helpful?yesno
»
Read the 5 user reviews on the Carvin AG100D Acoustic Combo »