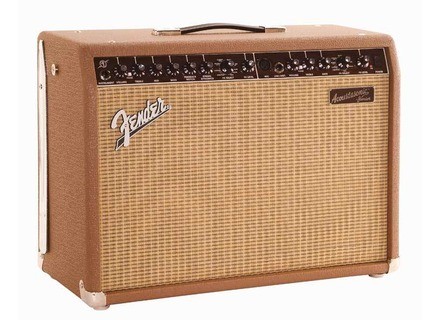 Fender Acoustasonic Junior DSP
3
I bought the amp at guitar center for about $470 dollars. I chose and amp like this to make my instrument significantly shine and also amplify it to a certain extent.

The amp does make the instrument shine enough to make the ear notice, but it does't have enough effects to alter the sound. The fender acoustic SFX had sweeet reverb, echo, chorus and all these neat effects that really changed the sound and made it beautiful. The acoustasonic jr has a microphone hookup for vocals and bass, treble, mid settings

The amp I have has a limited amount of effects and if you crank it up too much there is distortion and fuzz in the tone. basically the next model up is the acoustasonic pro and costs 2X the amount compared to the acoustasonic jr. this is a huge investment especially since the final price can go well over 1000 dollars. You might get stuck with the acoustasonic jr. and then if you decide to play with a band you will only have 40 watts of power which is not enough to suffice when playing larger sized gigs with electrics blowing you away. The acoustasonic pro produces enough wattage but the cost rises to a level that is too expensive for beginner or intermediate musicians. You'll eventually be stuck with a box that you cant use. Another downside is that the amp can only work a certain amount of magic, if you have a cheap guitar then you will definitely hear it through the amp. Even if the guitar has no bass, turning the bass knob to ten won't fix the problem- it will just make it more fuzzy.

Well built, but unfortunately it can't be put on its back like the acoustasonic pro. That feature projects sound better and makes it look more professional. Also if the settings are too high there is too much feedback and the amp and guitar will buzz. It shakes so violently that I feared for my guitar's life. So this means you bettter keep your amp knobs down.

It's a decent amp but the acoustasonic pro is much better. The problem is that it's not just paying an extra 100-200 bucks for a better amp. It's a significant change in cost because you have to go up into the thousands. But in the long haul, you will be stuck with a much better amp, more effects and make your guitar shine with pride. Just make sure you have a decent guitar to go along with it preferrably made in the united states.

Fender Acoustasonic Junior DSP
3
Purchased at George's Music for $499. This is a clean sounding amp when gain is on lower end. Once you turn it up feedback sets in and the guitar sounds like it's hooked to a distortion pedal (not quite as bad but you get the picture). Realistically I don't think the amp is meant for high gain playing and it serves its purpose by being a device that makes your acoustic/electric guitar shine with pride. Just don't turn those knobs up.

Cost. Reliability. Sound quality at lower gain levels. Can use mic or another instrument at same time through amp. Has adequate effects built in for acoustic guitar.

Can't turn the amp up without unacceptable distortion. Does not come with a foot switch.

Extremely well built. An amp you don't have to treat with loving care because it won't let you down.

For the cost the amp is good. Sometimes I wish I just spent the extra $200-$300 and got the higher end Fender Acoustasonic Amps for more effects, more instrument hookups, higher gain possiblities, etc.