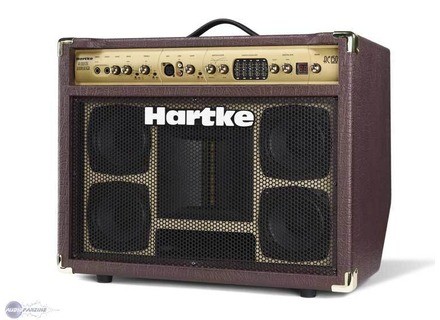 AC150, Acoustic-Electric Guitar Amplifier from Hartke in the AC series.

Hartke AC150
5
Hartke is known for being at the top of their game in the bass world, many people don't realize they make guitar and keyboard amps as well. I was able to checkout the AC150 Acoustic Guitar Combo.

The initial brown tolex with the gold back plate makes it look like something classy you'd see in a cigar shop with a Do Not Touch sign on it.

My local shop got this in and I had to give it a test drive. Brand new they run $449.99. There aren't many companies doing the acoustic guitar amp, so the Hartke didn't have too much competition. I played it against a Marshall and Fender, but liked this the best. I was driving 4 5' speakers instead of one or two bigger drivers. In my opinion I think this cuts down on feedback, but since I have no scientific proof this could just be an old wive's tale.

The kickback design which is a popular design used on the Hartke bass combos was a big plus. This allows you to angle it properly so you aren't wasting energy or blowing out another band member with you guitar.

The controls were simple. It has about 100 digital effects which were easy to navigate through. The effects were subtle, so it wasn't like some amps where you wonder, 'Who the heck would use this?'

Another plus is the RCA jack in and the XLR in. I did not try these out, but this feature takes it from a guitar amp into the PA world. Plug an MP3 player or Mic into this and get down with your bad self.

The effects could have had a rate or depth knob for the price of this amp. A subtle chorus or reverb this isn't necessary, but I feel I could benefit more from the delay effects if I had a tap/tempo.

Well built. I feel I could bring it out to a bar gig, let it make some comments about another amp's girlfriend and survive a bar fight.

Knobs felt sturdy, I was able to crank the amp up without fear of blowing something up. There's a huge difference in gain between the Piezo and the Active inputs, so I got a nice chirp of feedback as an official explanation (why read the manual?)

If you are on the market for a good, loud acoustic amp with decent effects to boot, check out the AC150 by Hartke.

artmusi33's review (This content has been automatically translated from French)

"Hartke put his great experience low amplification in the service of sound.
The result is powerful, accurate and extremely effective.
But that's not all! Revisiting the system Ribbon (ribbon tweeter)
Hartke hits hard with a series that delivers a definition of rare.
The sound you hear is that of your guitar ... Superb! "

All sounds, since the base is a faithful rendition and great sonor.

In a price range <1000 € you can not find better
Did you find this review helpful?yesno
»

clementBrest's review (This content has been automatically translated from French)

Amplification transistor. Amplification tube should be avoided to amplify a guitar sound (heat lamps render its absent for an electric guitar but to present an acoustic guitar, no need to add more ...)

- What is the power delivered?

Power of 150W. And nothing wrong with power level! it sends!

* 1 microphone jack (XLR), can apply an effect
* 1 auxiliary input (RCA), can also apply an effect
* 2 doses skyscraper (a piezo, an asset). No possibility to connect two guitars simultaneously.
- What are the settings, effects ...?

* 99 effects of 10 different types. The effects are of variable quality, some very good. The setting of medium effects, however. Example: 20 different echo effects, except that the echo frequency is variable. An echo effect will have a rapid rate, the next a little slower, etc. ...
* A knob for adjusting intensity of the effect still exists (fortunately!)
* A quality 5 channel equalizer
* An anti-Larsen also quite effective manual (choice of frequency and intensity to mitigate the attenuation in dB)

I only takes 7 / 10 for features for several reasons:
* No possibility to apply different effects to different inputs
* Setting the effects a little stiff
* We can only guitar plugger

Otherwise for the rest, the quality is exemplary.

- The configuration is simple?

Setup is extremely simple. A little groping is necessary for proper use of anti-feedback, but it's coming soon

- Do you get easily a good sound?

Yes! This is my first amp and I never never part!

I have not had OCCAZ have the manual, but I've never felt the need

- Will it fit your style of music?
I play mostly reggae, jazz and bossa. it suits me very well. A small effect for reggae and jazz, bossa nothing for.
I plug my keyboard also regularly top auxiliary jack and I am very pleased by repeating like that, with a nice little effect

- With what (s) guitar (s) / low (s) or effect (s) do you play?
I play mostly with ELECTROCLASS Esteve, the amp reproduces very well the color of his acoustic

- What kind of sound you get and with what settings ("crystalline", "fat ",....)?
I like the sounds very pure little or no effect (the halls I like very much).
Anyway, do not bother to hope for a machine with multiple effects and ultra electronics. This is an acoustic guitar amp, it does so admirably, the rest is not its role. Want to make a bold metal with this amp, go your way or you buy an effects pedal plugger top
- What are the sounds you prefer, you hate?
The Hall06 is particularly great
The echoes are pretty bof ....

Do not hesitate if you have 600 euros to an amp for acoustic guitar, take it! I had the OCCAZ test other amp in the same order of awards, including a compact I do not know what brand and quality of sound and the sound power were much worse. I play with repeated battery + bass + keyboard, I never really exceeded half the volume pot volume with quality and warmth of his copy.

His big flaw, the size and weight ... but detaches quickly: D

With experience, I would do without hesitation that choice