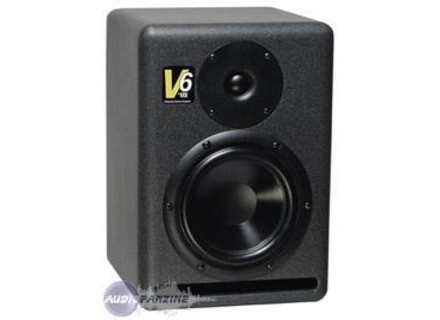 V6, Active Monitor from KRK in the V series.

amleth's review (This content has been automatically translated from French)

KRK V6
5
These speakers belong to the range of KRK V. They cres t before the V4 and V8, which explains the failure of prsence boomer tresss to son. This monitoring speakers with a clear objective of rigor and precision. It is not to have fun with surenchre extrmits the spectrum, as is too often the case with other constructor. They are right, probably the most lines in this price range (h h balances, I paid 1026 euros!).
For the look, we like it or not, is secondary. The cabinet is seriousness, and the original petition of dme boomer is concave, which, it seems, has a good influence on the bass. I put eight, they are slightly worse than the V4 and V8, latest issue.

Let's talk about the neutrality ...
I'll make enemies, but we must say that things are.
I have long cost the V6 and the Mackie HR624. Jazz, Electro, classical intruments, Nine Inch Nails, it's all pass and I think it's clear: Mackie have some sort of hollow in mdiums absurd, and too low to give a big Submitted fuzzy impression of the bottom of the spectrum, making it impossible to work in the surgical complex sound editing in this range of frequencies. On the V6, it certainly does not have these big bass that many people love it, but we gain in clarity is remarkable. In fact, the 624 reminds me of Genelec, even if they are still even more stiff. Low, no mdiums. When switching on the V6, you can breathe! Stereo image is comparable, I think, that of 624 is to say excellent. I put 9 because this stiffness is not unnecessarily flattering trs important to make mixes and srieux prcis.

For the price I had to pay 1026 euros is a real killing. With KRK, we chose to isolate themselves from surenchre bass and blah-blah mdiums major brands Genelec / Mackie. The sound will be less fat, but a formidable and unbeatable clarity. Here is the real hardware work.
I put 9 because 10 is for the V8, which is latest issue.
Did you find this review helpful?yesno
»

KRK V6
4
Monitors the most neutral possible
Stereo lmage, low "normal" Aiges Fidler
home studio use, v4 v8 too powerful and too little!
I heard Dynaudio indeed excellent but a bit cold?! my eardrums
of Genelec (FRO), and Mackie (blah-blah) the tannoy (less ugly than Describes flattering but
mdium ds), the event (well, but what bass!), ales (to the rescue!)
behringer truth of (fm too low and soft, uncertain sound ... no nothing at all ...),
and that's it.

N'tant ingnieur no sound, I am unable to apprcier
"Technically" these speakers, I can only advise
subjective account of my hours is listen and passes
do ... "CRER" sound ... a long time.
trs stro good image, the sound is such that trs prcis
I adjusted vn. I did not peru.
test the volume, I will appreciate the stability not saturated, the sound
trs trs remains clean.
not tiring!
superb low volume

One month that I use and I do not regret,
I mix my rcout with my jbl small, and well I have not corrected
bcp things.
the price is certainly not the door of every budget from 1000 to 1100 euros + _
but an amp rating of quality sparment and trs good speakers?
excellent quality-price ratio.
However, for me and the world tt, tt is too expensive, it would be great
to have them for 100 euros, made by a guy who does not f. .. the bl!
I laugh!!
Did you find this review helpful?yesno
»

KRK V6
5
My specifications silent simple home studio use only, to mix rock / pop with a lot of acoustic guitar and vocals. So the precision low yield and neutrality of taient CRITERIA trs important to me ... Not the same! Their weight gives them a good foundation.

I do not have perfect pitch ... I actually even a accouphne so I think I frquences fair few, but I confess that the neutrality of the spectrum, Stereo image, the precision of sound and dynamics are perfect. It made me redo all my mix ... for the best (j'espre).

I have for a month .... and really I love them. I bought the USD (exchange rate requires

) on the advice of AFiens, the seller of the Guitar Center in Denver Colorado and the manufacturer itself ... I do not really regret my choice. KRK shall adopt such a shame .... SERIES
Did you find this review helpful?yesno
»

didiquette's review (This content has been automatically translated from French)

KRK V6
5
APRs have used most of the standards of monitoring speakers (30 years of experience) I am really convinced that KRKv6 are the most neutral speakers so excellent that I connaisse.Jamais taken in default of COST mixage.En bad radio mono / Stereo nothing to doubt.

2 years and still use nickel.
They are a little onreuses but the quality is paid for!
I do it again the same choice and could easily do without The series 2 is plutt fates
I think in a commercial spirit innovator in pure technique, the cart is almost nonexistent!
Did you find this review helpful?yesno
»
Read the 5 user reviews on the KRK V6 »