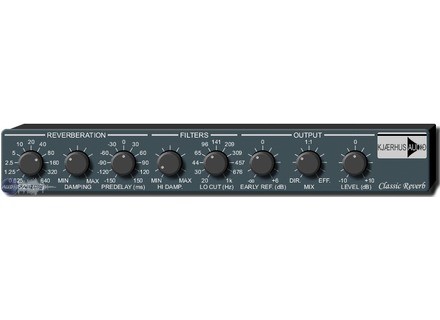 Kjaerhus Audio Classic Reverb [Freeware]
4
Kjaerhus Audio Classic Reverb is a free VST plug-in that has been around for a number of years. I used to run the plug-in in Cubase SX before I switched over to Pro Tools a number of years ago. I believe that this plug-in and the other Kjaerhus Audio plug-ins are only compatible on PC computers. Downloading and installing the plug-in shouldn't take users all too much time as it didn't take me very long at all. You can download it from a variety of sources on the web, and just follow the step by step instructions that will lead you to installation of the plug-in. The interface of the plug-in is really simple and straight forward, as is the case with all of the Kjaerhus Audio plug-ins. It has parameters for size (of the room), damping, pre-delay, hi damp, low cut, early reflections, and as well as those for mix and output level. It isn't all that in depth when compared to some of the other more modern reverb plug-ins, but for one that is free and is a number of years old, you really can't complain. I don't believe that they made a manual for this plug-in.

When I was running the Kjaerhus Audio Classic Reverb plug-in, it was in Cubase SX on a Hewlett Packard Pavilion dv8000 lap top PC that had a 3.0 Ghz processor and 2 GB of RAM. This system was definitely more than adequate to run this plug-in in Cubase smoothly and without issues. It wasn't my main reverb plug-in at the time, so it didn't see all that much action, but I still did use it a good amount. If you are concerned with if this will run well on your system, just go ahead and download it and see for yourself!

While I can't say that the Kjaerhus Audio Classic Reverb is my favorite VST reverb plug-in, it will definitely get the job done for those looking for a free reverb plug-in. It's got a good amount of control over your sound, which is always nice, even if the sounds aren't the most realistic when compared to other reverb plug-ins. However, you really can't go wrong with a free plug-in, so I'd encourage all users who have a VST based DAW on a PC to go ahead and download this one for sure...
Did you find this review helpful?yesno
»

It is a rverb dpanne that when beginners and is not resource intensive, but nothing extraordinary face some freeware like ambience, or Sir, let alone face of other plugins srieux more.

again the choice, yes, because the choice much more restricted silent era.
Today, I advise to go plutt VTRE path and you INTERESTED SIR, Ambience, ReverberateLE, to name a few.
Did you find this review helpful?yesno
»