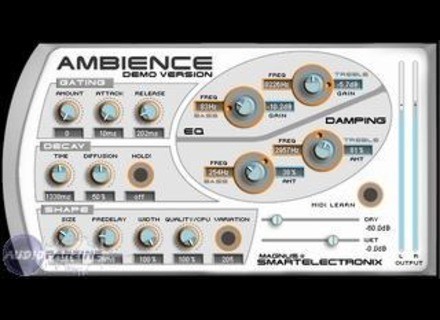 bENORMUS's review (This content has been automatically translated from French)

Smartelectronix Ambience [Donationware]
4
Installation without problem, it dcompresse and copy the dll file in the plug-ins and go.
No problem of incompatibilits with Cubase SX 2.

The configuration of this freeware reverb is super easy to access, the more it bnficie of prrglages quite interesting for those who are so drunk you touch any small pots, choosing a pr -rglage and the case is in the bag.
For a software reverb, I find that the result of this little wonder freeware is more than passable.

So for those who are not too many sub invest in a plug-in the quality-performance ratio of this freeware is very good, even excrellent see.
To make a small demo to cool and set the reverb "subtle Manire" on any instrument, I advise you.
Did you find this review helpful?yesno
»

sonicsnap's review (This content has been automatically translated from French)" A timeless must!"

Smartelectronix Ambience [Donationware]
5
Simple Installation. Component to place a file in the folder and it is suitable.
Ambience is "donationware", ie a plug that works for free, but we are kindly encouraged to give what we want when we want to the developer. Depending on the environment available, the interface is decorated with a pretty "skin" (see photo) or in the form of a simple white page with the settings column and a zipper for everyone. This is the latest version I have.
Ambience going to settle complex because it has a lot of parameters. In fact, when you understand the roles, everything becomes simple.
The "Gating" allows some interesting special effects, but should remain at zero if you want a realistic reverb. "Time" is the length of the effect. "Diffusion" in principle gives a more ground in low values ​​and high values ​​in smooth, but in Ambience, this parameter is much more subtle and tenuous than in other reverbs. "Hold!" makes it possible to effect loop for a reverb infinite. Then the size of the room, and predelay "width" determines the stereo width of the effect (zero, the sound is mono.) "Quality / CPU" saves CPU resources by reducing the quality sound. On a modern computer, this setting should remain at 100%. But you can get some interesting special effects by lowering it. "Change" alters very thin sound of the room .. to be tested. The "EQ" to equalize the sound effect. "Damping" is interesting: In fact, here we can lengthen or shorten the reverb in the treble or bass, above or below the specified frequency. For a neutral, adjust settings Amount to 50%. Finally, you can adjust the volume level of the sound "dry" (if we use Ambience in insert) and that of the "wet". Note that only those entitled to the pretty "skin", it is possible to control the parameters by noon thanks to the "MIDI Learn".
As can be seen, no parameter very complicated or exotic, except maybe "Change" whose effect is just perceptible. Just need to sculpt a beautiful reverb.
In addition, 78 presets are provided that can serve as a working basis and which illustrate the vast possibilities of this plugin.

No problem on my Mac Pro with Mac OS 10.6.8 and Digital Performer, except that the version of Ambience which I did not right the pretty interface that he knows other drafts. I have no right either to "Midi Learn". But hey, all that does not bother me much. Moreover, Ambience is long past to be very resource-intensive processors. I actually disabled it when I was working with an old G4. But our modern computers this reverb is in the standard: Its consumption is moderate and I can now easily open ten instances and probably more.

I use this for a very long reverberation (in fact, since its inception.) I have always been excited by the sound and the possibilities it offers. The sound is clear, warm, definitely not metal. In terms of quality, "donationware" sinks, and many, many reverbs trade. Working well and EQ "Damping", you can get a very realistic effect and it is really hard to take this reverb in default .. Strictly speaking, if you push "Room Size" completely thoroughly, the sound can become slightly industrial. But do not worry: you can still get very nice effects like "church" or "cathedral".
On the other hand, I like the effects you can create with the "Gating". And "Damping" can be the effect of a very flexible, efficient and simple. I recommend testing the different presets available and Ambience settings on a small loop of drums. In less than half an hour, you will understand how this plug-in is convenient, well organized and how it sounds!
I put 10/10 for the quality / price unbeatable (especially as it is the user who sets the price at will ..)
Did you find this review helpful?yesno
»

yol250's review (This content has been automatically translated from French)

Smartelectronix Ambience [Donationware]
5
Installation (Mac with Tracktion): no problem, except that the file extension is not installed. Vst (which is no problem in terms of the sequencer, only one gene for obsessive-graphic I am who spend their time to reorganize their plugins folder)

General configuration sensitive, that's normal considering the number of settings available! (This is its strength). Fortunately, many presets are available, which greatly simplifies the task.

No manual to my knowledge (though it would be very useful!)

I'm working on an iBook G4, equipped with an external card M-Audio FastTrack Pro, and 512MB of RAM. The host is used Tracktion VST v.1.6.

Until I fix the knob "quality / CPU", the plug was almost unusable because too greedy: impossible to run both simultaneously, and therefore obliged to freezer all the tracks ... but the judicious use this setting, no problem (in minimum position, the CPU is reasonably low, I can run 4 instances at the same time as various other plugs, without being at least as either. And for final result, back to 100% quality is great!

I use it for a few days (intensive), and I must say I'm charmed. I confess to not having entered all the settings (button change?? The midi learn ???), but using a preset as a starting point, and then fiddling, it is by far with this plugin that I ' obtain the most natural reverb (compared with other freeware reverbs).

Also, I love the built-in gate, and the eq, and the ability to set the frequency on which damp apply and at what rate. Overall, this is all of this a little reverb sound processor itself, which allows quickly eliminate unwanted resonances and crackling metal while retaining the desired effect.

It is also very versatile and lends itself to various uses (treatment of "light" on rhythm guitar, for example, special effects most unbridled).

Given the market for free software reverbs (or almost) on Mac, this is definitely the best by far. I did not say it had a chance to really test convolution reverbs (besides the demo version of Altiverb, which I planted the bike in 5 minutes ...)

Quality / price ratio: infinite, of course ... That said, I think sending a donation to the author, I am using more than that.
Did you find this review helpful?yesno
»

quentin59's review (This content has been automatically translated from French)

I use it for a few weeks and I love its versatility, the reverb quality to the effects of ambience that distort the sound completely.
I no longer use it as its presets can already play all types of ambiences I want.
Really great!
Did you find this review helpful?yesno
»