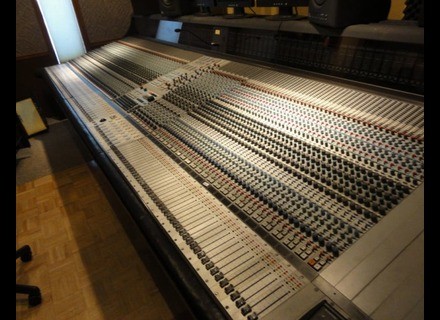 Amek 9098 i
5
Designed by Rupert Neve console that seems to be rooted in the old consoles of the same name as the 8068 or 8078, the election of large modules, and since the template already so strong console (56 entries) it uses a system split monitoring, and in fact this is not a console "In Line" for obvious reasons of space ..
For inputs there is no transformer, but tours such as this but without having their disadvantages. However, all outputs of the console are equipped with this body ..
Used on the console, there are 3 types of input modules: the module monitor which is half as wide as the main module and stereo input module, the same size and features the same as that of EQ monitoring, enhanced by a specific control signals for type MF and AB. The microphone input channels has 16 aux sends and 12 of them are placed above the equalizer and 4 below, I believe it is a good compromise given that recording in general we like to have of all departures at hand, while oriented to use Broadcast, or Post-production, we prefer the opposite, namely equalization closest. The 12 auxiliary sends the top are virtually a button / bus, while others (called CUES) can be used for stereo bus for the bus or of course to record their own bus.
There are also two panoramic, which means that we can handle many types of panning, we selected a separate control panel, configure when the console.
The stereo input channels are identical to the mono channels.
The routing is typical of the Neve console, namely intuitive and well thought out, it buries a lot of other consoles, SSL, Harrison and Euphonix included ..

The approach of such a console is always tricky, because here we are very far from the console saying "home studio" and only experienced technicians can quickly get out and actually get the desired results.
The fact remains that despite the potential for routing and monitoring of this absolutely insane analog console, it still remains relatively intuitive, it can be used for the console type "split monitoring" which is really even a rather different approach to a console "In Line" classic ..

There is quite tricky because we are in the notice that is the most subjective, that the tastes and colors. Sounds does it better than its counterparts in the SSL, Neve or even Harrison? Only you have the answer, as stated above, this will depend on your personal taste ..
The sound of the mic amp is very low, which is particularly in the midrange, well below what is found in the console of the same size and same range.
The equalization very typical "Neve" and seems pretty close to a VR60, although there are some variations such as the filter notch filter, which gives access to two bands of mediums, each with a notch, very tight, depth of 30 dB, which represents a width of only a few Hertz is very sharp to the analog!
It is technically very useful, especially for post-production work, very convenient to remove any unwanted noise such as from a camera, an electric buzz, of unwanted noise.
The equalizer, as it has is a formidable precision and an extraordinary musicality, the corrections applied with narrow bands and with muscular gains remain a surgical precision and without the limitations of digital eq for this technology and aps doubt on this point we have to do a good Neve ..

Well it is obvious that to draw all the qualities of this type of console you need the equipment and place accordingly, the quality of a studio, so the final result will always be limited by the weakest link of the channel sound, and this console will not be part ..