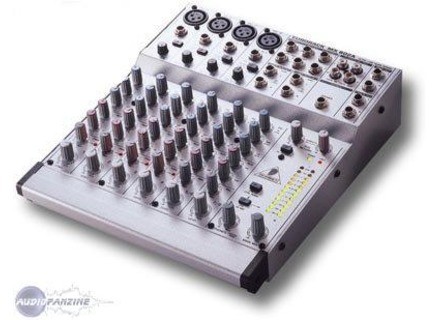 Eurorack MX802A, Analog Mixer from Behringer in the Eurorack series.

This is one of Behringer's well-known ultra-compact mixing consoles. These tiny tools are ideal for small-scale, small-budget recording projects. And the stereo 802A would also do as a super-portable mixer for a 2-3 piece live act. I also take mine in my briefcase and use it with a battery powered portable PA box for quick in-and-out gigs.

The MX 802A has six basic input channels including four mono XLR/LINE (i.e., HiZ/LoZ) inputs and two stereo line-level inputs. Each channel has its own three bands of EQ, Aux send and return, stereo pan, and level contols. The first four channels also have a low-frequency cut switch and (critically handy) an input gain control. The unit also has the phantom power necessary for my condensor mics.

I use the 802A mixer for making home-brewed demos with a PC-based digital recording setup. Behringer has been accused of "borrowing" designs, especially from Mackie products. I can't verify the charge, but I can verify that they do sound remarkably close in quality to products several times the price.

The mixer is fairly simple to operate, but like other Behringer products I've used, their manuals are written for a more experienced user than their prices are likely to attract.

For the money you simply can't complain. The very hefty seperate power supply isn't the most elegant thing. But it's probaby necessary to keep the noise down in the unit itself.

After a year of regular use it has performed flawlessly. The pots are all quiet and smooth. It also seems to resist hum, though I've got it sitting on top of another rack unit that has a built in power supply.

Though I've heard Behringer service is not great, and I doubt the MX 802A would survive heavy road use. But heck, for the money, you could think of Behringer's mixers as disposable Mackies. Their sound is very good and the compact design is simply the handiest for home studios.

CROPUS's review (This content has been automatically translated from French)

Behringer Eurorack MX802A
4
Small mixer normally rack, 225 mm wide, but a rack measuring 480 mm, adding a small angle of publicly sold in EVERY business, and this one is a handyman can, it is very easy to Racker in my opinion.

Tes simple general configuration.
Functions, while bin in front of you!
Manuel clear though for small push buttons, try!

Transparency point of view, I do not have the absolut oreil, but it seems a good linéaritée.
Personally? I have a hum that apparently comes from master.les mic preamps tend to blow towards the maximum gain.Mais with a micro high-output gain that should be improved.
Equalizer, I would say effective.

I use since 2001.
What I like the most is the phantom power on micro voice.

What I like least is the phantom power
on micro total 4 votes, not by voice, you
requires disconnecting microphones as dynamic
which is not using phantom power.
A true individual monitoring unless they use a
sends fx near-fader.
I used the temp, a boss, a studio Fostex,
I do not own any more,
I would say it has a good quality / price ratio, bought € 120

I remake that choice, but with linear potentiometers release when-meme!
Did you find this review helpful?yesno
»

zjulos's review (This content has been automatically translated from French)

Quite correct in general, I did not find what produces too much breath

3 months of use, it works very well, the price (about 600frc new)
say anything, it's an excellent quality price
Did you find this review helpful?yesno
»

tronic54's review (This content has been automatically translated from French)

Behringer Eurorack MX802A
4
This is not a table rack, very compact 22 x 25 cm. 4 mono inputs and 2 STREO
All these entries possde qualiser a 3-band, one volume and two buttons rglages for the PRE / POST (boucje effect).

The 4 inputs are XLR and Jack and a prampli possdent all adjustable.

There have no effect Intgr.

The 2 inputs are made by Stereo 2 mono jacks.

Note, in addition to everything there is a line between (o'on nothing rule), useful for a platinum cd ...

Trs easy to use

A lightweight breath is noticeable when one headphone costs at the final mix.

This is Noit breath a little in the mass when you put an amp later, but still a bit noticeable high volume.

It's been almost a year since I have and I do not complain. I bought about 150.

The only default is that this table is the breath. It is handy I use it every day or I plug my guitar, my multi-effects, my box and my PC ryhtme to cost my mp3. Is more than your exact correct especially for the price!

I reffer this choice, very good quality / price
Did you find this review helpful?yesno
»
Read the 9 user reviews on the Behringer Eurorack MX802A »