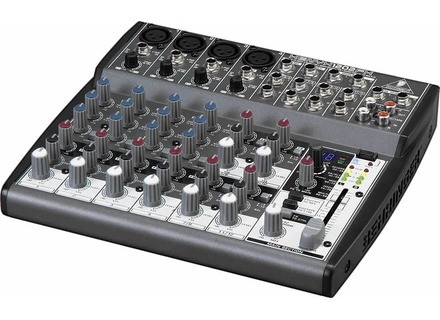 Xenyx 1202FX, Analog Mixer from Behringer in the Xenyx series.

Behringer Xenyx 1202FX
4
The Xenyx 1202FX is a 12 input mixer that is loaded with some really good effects. I was completely shocked at how low the price was on this mixer and how great the effects are. This mixer has great 3 band EQ’s that gave me a great sound and the preamps are very nice too. They are warm and clean, they sound like some of the preamps that I have on some of my higher end mixers that cost a lot more than the Xenyx 1202FX.

There are over 100 built in effect presets like chorus, delay, pitch shifter and reverb (and many more). Each channel has an FX send. This mixer has 24 bit FX processing which is almost unheard of out of a mixer at this price. This mixer was not too portable to me because of the fact that it has 12 channels and is a little wider than most of the portable mixers that I have used in the past but that did not stop me from taking it with me because of the pre amps and FX processing alone!

The 1202FX does have compression and a lot of effects but it has no computer connectivity like USB. The EQ is 3 band and can be found on each of the channels. The knobs are made well and the LED metering is top notch. There is not phantom power, which would have been nice to have but with everything else being so good I can look past that. I love this mixer and will continue to use it whenever I need it.

The FX processing on this unit is truly my favorite feature of it, it gives lots of options and FX’s to work with. They are all high quality and sound amazing. You can also purchase this same mixer without the effects for a little cheaper but why not spend a little more money and get all 100 plus effects.

Behringer Xenyx 1202FX
5
The Behringer Xenyx 1202FX is a portable 12-channel mixer that is perfect for small mixing situations. It has a variety of uses and purposes, and even if you were to use it just as a headphone amp, it's portable enough to work. It features 4 main channels with XLR inputs, line in (balanced or unbalanced), complete with 3-band EQ, low cut switch, fx mix control, pan control, and level and trim controls. The last 8 channels are stereo line-in channels, with less controls (no EQ on these), and are suitable for signals from keyboards, cd players, and such. The Xenyx has a master fader (the only fader on the device), an fx section with 99 different fx selections, and various routing controls. There are three main outputs: tape out, control room out, and the main out. You can control if the tape input sends to the control output or main output or both, for example, and the flexibility given here is nice.

Unlike a standard mixer, there are no faders on the individual channels, but instead a level knob is given. The four main channels have clipping LED's, which in my opinion, is essential. The input gain is set by the trim knob, but the knob itself is small and dark, and at times, it's very hard to see it's position.

One of my biggest problems with this unit is a simple, annoying issue: the power adapter. The adapter is non-standard, and it has 3 metal pins and a plastic pin as part of the connector. Reminds me of a midi cable. The problem is, it must be inserted at a certain alignment, and it is very easy to accidentally jam and damage the pins. Why Behringer must use this usual connector, I have no idea. There is also no power switch, so you have to plug and unplug this cable all the time, in order to turn the device on and off. It's just asking for trouble.

The mixing abilities and sounds on this unit are great. The FX I never really know what to use it for, but it is nice to see a variety of FX options here, from reverbs, to delays, to pitch effects, to modulations.

If you need a small, portable mixer, this is a great, cheap option. Behringer makes affordable equipment, and I have yet to find a piece of Behringer hardware that has disappointed me. Be sure to check this out!
Did you find this review helpful?yesno
»

Akiman's review (This content has been automatically translated from French)

Just mini review:
Yes, It's Behringer, I am a passionate lover and well organized Argentine tango concert times, I took this mini console ,, well pleased.
Leger, conpact and portable.
The FX is a little cheap but it's good for vocals ,,, easy and very acceptable.
Hello ,, ,,, Behringer sound a bit metalique but the console is pretty transparent.

The negative point (for me) ,,, the decision headphone is pretty boring.
I can never fully extend ,,, and the sound of this outlet is not good at all
By e out against Mix IMPEK ummm ,,, not know what ,,, (see opinion on the 1002FX series, etc ..)
Did you find this review helpful?yesno
»

cpt reith's review (This content has been automatically translated from French)

Configuration could not be more simple and accessible. The effects are pretty useless. Routing is nonexistent: impossible to have different outputs, except tape. The output is mono fx post volume.

The sound I was never shocked. The preamp blow fast enough.

I used it three years without much maintenance. Soon the low cut buttons began to sizzle and turn off the sound. Then this is the main fader that began to spit, or cut one of the stereo channels. Then the control room knob which is put. Ultimately unusable. But I repeat that I never met the beast. Home studio use. I will not make that choice, buy new store when I knew nothing. If you can have 30 euros max in good condition (well test all the pots and buttons) then it's going.

Did you find this review helpful?yesno
»
Read the 8 user reviews on the Behringer Xenyx 1202FX »

Published on 06/30/11
Behringer gives you a chance to win several of its products.