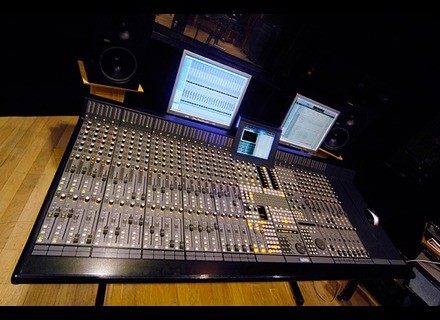 Euphonix CS2
5
Analog digital console commands. The Cs2 has three distinct elements, namely, the control console, the audio rack and the external PC. Thus, all the electronics dedicated to the audio rack is in a totally independent of the console itself, which is only a part of intelligent control panel.
On the other hand, the console can also run standalone with no external computer puisq'elle has enough memory to permanently store fifty states of different console.
The snapshots include absolutely all control parameters (gain, EQ, AUX, etc ...) and configuration parameters (slice mono or stereo, routing, monitoring etc. ...)
This console has the advantage of not being bound hand and foot with an external computer. It will remain operational even if the donations computer sees its operation troubled by X or Y reasons ..

With dynamic automation faders, mute, pan, aux sends, EQ, routing, software Euphonix can write a level to be maintained automatically on the whole mix done on a period between the exit point and the end of the mix.
This increases the speed of work during a first pass of "roughing" in which to make a change on a portion of the mix without having to scroll through in full. Of course, may have to decide the parameters that we want to automate .. All controls (EQ's, routing etc. ..) even if not part of the dynamic automation are saved along with the mix and once again become effective at the point of the latter without loading multiple files.
Can be programmed to trigger macro-functions with one button punch in the number of faders or even the entire console ..
Finally, the software automatically saves a "pass" when a movement was recorded and the recorder stops, creating opportunities to "undo" and comparison between two assists ..

This console is very transparent, has a low background noise, good dynamics, an effective and low EQ section and a good color rendering in transient probably due to the absence of a transformer on entries .. A console

very good and recognized as such .. However, commands such as routing or equalization may confuse some users attached to the conventional buttons that it is an analog console ..