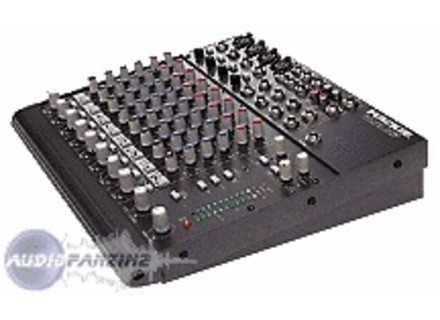 Mackie 1202-VLZ Pro
5
The 1202 VLZ Pro is a compact analog desktop mixer with an impressive variety of inputs and outputs to suit your needs.

In total there are 12 possible channels to send in to the mixer, 8 of which you would get by doubling up on line in's 5-12 stereo inputs.

Each channel has 2 knobs for controlling Aux effects sends, 3 EQ knobs, a Pan knob, mute and solo switches, and Gain knob. The EQ is 3-Band, with Hi, Mid, and Low control. Additionally, the 4 Mic channels have a knob for controlling the Trim level.

On the back of the unit you find:

There is no support for automation, and the knobs are all standard, NO motorized knobs or sync ports here so everything you do to your sound at this stage happens on the Mixer itself.

The mixer is all a nicely weighted metal construction, and the knobs and buttons are all plastic.

The mixer is very straightforward and simple to use if you have experience using a mixer before. The whole thing is 1 knob or button per function, which is the best way to go for live mixing if you find yourself needing to make quick on-the-fly edits.

The knobs are color coded so with adequate lighting you don't have to waste time searching for the correct label. Black is Aux EFX level and Pan, Blue is EQ, and White is Gain.

I do find that sometimes the knobs on the EQ feel a little too close together and tiny. I think Mackie did what the could to utilize the space, but if you have big fingers this could pose difficulties nonetheless.

Setup is as easy as plugging in your gear correctly and flipping on the power switch. It runs smoothly with no problems.

The manual is sufficient for learning how to use the mixer, and even includes some examples of things you might do with the on-board features.

I mostly use the mixer to add some punch to my vocals, digital synthesizers and plugins.

There is a bit of noise added to your sound, especially if you bring up the gain really high, but this is of a level common on all similarly priced analog mixers.

I find manipulating my sound with this mixer works very well. The EQ is solid and you can hear the difference when you use it. I almost always turn the EQ off on my digital synthesizers and use this for equalization instead because the sound is so well-rounded.

The mixer adds what I can only describe as a warmth and balance to your sound. Not the sort of effect you would get using a compressor, something different. When I use it with multiple instruments, it makes them automatically sound like the belong in a mix together. This is something you don't get with most digital mixers, but it's also something worth paying attention to- it DOES change the character of the instruments you are running through. It is not the most transparent mixer out there.

You can get plenty of volume out of this provided you are using it for an appropriate setup. I have used mine in my studio and in band performances with great success.

Another thing I found useful is that I run the sound of a complete mix through a stereo channel and back into my DAW before bringing it to the mastering stage as 1 stereo track. It gives the whole project an even and unique character.

-Ease of access to all parameters
-Heavy enough to be stable, light enough to carry around
-Great sound
-Multiple options of output routing

-The button switches for things such as "Mute" and "Solo" on each channel are color coded by gray on top, white underneath. Honestly it is very hard to see if some of the switches are on or off sometimes. The switches don't have a large distance they cover between the two options and I find myself having to bend down and check sometimes to make sure one is on or off.

This is the only analog mixer I use. My father gave it to me, and I don't think he used it much or knew the potential of its use. I have tried a few other mixers since getting this one, all in a similar price range, and I don't think I would ever switch to something else. The VLZ Pro is reliable, compact, and gives you the best sound for your money.

powerchordfx's review (This content has been automatically translated from French)

The three qualiseur bandwidth allows fast calibration for each track.

The inputs and outputs are well positioned: allowing the console to stay clear even after trs connected instruments.

The VLZ Systm (low impdance) makes almost no breath (you really have any background or to abuse the qualiseur).

Operation is simple: everything is described on the mixer. If we do not do things trs particulires, the record remains in the Tagrera.

A really gniale and practice, the MUTE tracks referring to an output cuts rather than cutting btement. What was the point? If you are like me an expander (or gnrateur effects?) That between one to add effects, the mixer will allow you to send multiple tracks simultaneously on this between and you can handle and these tracks with the same effect.

In short, in use, this mixer is really well done.

The manual is well organized: it works Fawn visual. That said, for novices mix, there are functions that are not easy to understand (my Premire mixer).

The sounds are good trs. The table does not add coloration.

On each volume knob, there is a representative (U) that gives you the unity gain: this repre gives the position o the breath is the lowest (if you hear it, think plutt change your amp).

The qualiseur is sensitive and prcis. It should most sound but lacks a little clear for classical sound.

I use this mixer for a little less than a year in home studio, it's really the best!

Qualitprix related, it is great. The reputable brand is even on the product of class (no need to target the premium for the quality. Do not hesitate to buy it!

If one day I have to change the mixer, it will srement for a lack of tracks, I would not hsiter a Mackie 16.4 VLZ Pro ...

Mackie 1202-VLZ Pro
4
It is a small table in mackie analog channels with 4 microphones (switchable phantom power supply for all channels) and four stereo line level (of Jack) there are two auxiliaries and a "pre mix" and an entry- output to an external recorder such as (by RCA) is the master XLR and Jack. The power supply is internal, and especially, the rotary knobs. Metal shell, very strong including painting!

It's an analog mixer very, very classic, nothing complicated, very easy to carry as little light and Sufis to be placed between two devices.

The sound of this table is pretty good. The preamps are pretty clear, and quite a few blows, the eq is quite accurate and efficient but no more, having only three fixed bands is not very practical, but for a console in this category can be not ask too much. Finally the sound that comes out of this machine is not too bright colored like on other consoles like that, especially at the risk of repeating myself not breathing or nuisance pests, like on other consoles cheaper and widespread . The problem is that the sound that comes out is the sound that goes well with a big kick-eq (which can be an advantage). I put 7 but it is very subjective.

I must say I find this very powerful console, in fact it is rather intended to premix the keyboard or sound with just the voices of a group any more. But it works fine. Only after several years of hard loyal service (over 4 years) has released a track, the horrible crackling microphone preamp! but the other slices are quite usable (one of the big advantages of the analog to digital). That said it's still reliable, much more than Berhinger which you have the fader in the fingers after three months of use. I did not pay but I know it's worth the price but no more. Since I switched to digital (Yamaha 01V96) is more expensive but more convenient. I recommend this console to those who want not "break the head" with big apareils but want good sound, for people who want opportunities for mixing larger is better to invest in bigger.

Daddy Abdel's review (This content has been automatically translated from French)

The 1202-VLZ Pro is easy to use. The manual is clear enough but you can do without if you have already tasted a console.

Do not seek most is one of the best analog consoles like that. Mackie has also proven its expertise. I use it for 3 years. At first I hesitated between the VLZ and VLZ-1202-1402 because of faders. Even if they are absent on the 1202, the console is still respectable. The sound quality can work on serious projects. The table was well thought out, with all the bells and whistles, most of Mackie. It can even give a certain sound quality to the sound passing through them, the potato in respect of certain instruments (with my MP-7, I am filled) ... As for the legendary breath, I have not personally. And as with any good decision requires good voice preamps, Mackie again provides. I got a sound quality that I would not think to obtain with the XM8500 Behringer. Nothing to say!

This is certainly not a digital console, a console to do everything, but an analog console and see what it can do as such, I can not give a lower score. Some may find my opinion pro-Mackie but I give an opinion resulting from a comparison with other consoles of the same type of satisfaction that few consoles can provide. Chapeau!

Did you find this review helpful?yesno
»
Read the 6 user reviews on the Mackie 1202-VLZ Pro »