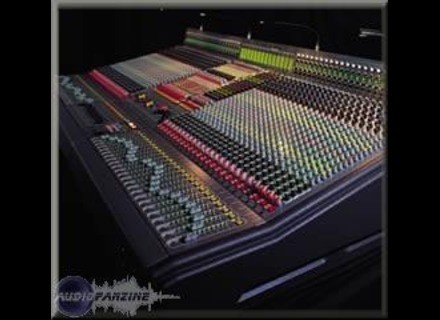 The XL4 is a analog console with automated recall featuring:

- 2000 scenes can be stored to recall all channel routing, all channel major control functions and all major output mutes with 12 motorized VCA dynamic level recall with import/export/backup of data on RAM card (possibility of synchronization to SMPTE time code)

blackle's review (This content has been automatically translated from French)"Her Majesty XL 4 .."

Midas XL4
5
The Midas XL4 is one of the most powerful analog console and comes with automated routing functions. It comes in one version with 64 input channels (48 mic / line inputs + 16 returns to the intended effect), 45 outputs and a section of mastering 8 channels. It also offers 10 automated motorized VCA faders which is incredibly convenient to recall different scenes of mixing for live sound tour or theater applications.

The Midas XL4 console is probably one of the most highly regarded analog console in terms of sound quality. What differentiates it from other preamps are its dynamic and offering a signal / noise ratio for a truly unique analog console originally vested in the sound, the EQ after the famous XL3, but extended and enhanced to provide an especially true 4-band parametric, and it is undoubtedly one of its many strengths, musicality and precision are in the spotlight. The 'Midas Touch' of sound.

The main features are:

• 48 channels (64 inputs), in which modules can be installed stereo from 17 to 24 and from 41 to 48.
• High end microphone pre-amplifier (with input transformer option)
• 48 mic inputs and line selectable with individual gain for each
• Direct output on each channel with adjustable level (multitrack or live recording feed)
• High end true 4-band parametric equalizer (as opposed to XL3)
• 24 auxiliary sends (16 mono, 4 stereo).
• 16 audio groups can be controlled by the two great masters VCA.
• 16 additional entries for the effects returns can be assigned to the 10 VCA master.
• Control of each channel by the 10 VCA master motor and the 8 master mute.
• Direct inputs available on each output coupled to console each other or with a.
• Matrix 18 x 8.
• Automation can store up to 2000 scenes and memory mute switch EQ, aux sends, among other things ..
The routing, switching and mute the main functions are taken into account by the automation manager of the motorized faders.
• Bantam Patch 158 points available in the back of the console to fulfill our dreams (see fantasies) sound wildest.

It is also important to point out that automation has on the console can be synchronized to SMPTE time code which can be used for automated mixing situation (such as for broadcast)! The automation covers 2539 switching functions (mic/line switching, phase, EQ on/off, auxiliary on/off, group assignment, VCA assignment, mute on/off, VCA motor fader position) to control most of audio assignment and signal routing possibilities. It is utter luxury for a live console! Especially when one would compare with analog studio consoles such as an SSL 4000 Series G automated functions.

All inputs, outputs, and loops insertions are balanced signals course with the exception of the headphone output.

If one would start to compare the XL4 in terms of features (overall I/O, groups, VCA, mic preamp and EQ sonics) and possibilities (complete automation and motor faders) with the predecessor XL3 ... the XL3 starts to look very limited in comparison.

For a complete list of features of the XL4 console go to the Midas website to read both brochure and user manual:

Regarding the use of this console that does not baffle anyone, but if you have never used it is very likely that you will be impressed by the number of orders and potential of this XL 4. As for the XL 3 I think it is worth mentioning that all orders are visualized by LEDs thankfully given the vast possibilities for signal management on a console of this size.
The automation of the console can be complex due to the extended features but fortunately it remains in practice well done and logical once one went through learning to use it. And the use of automation protocol SMPTE live is something that is difficult to stop using once you have tasted. Thank you Mr Midas!
Te 4 XL is very ergonomically laid out and quality of feel is really top notch as it exudes quality and professionalism without any compromise.

On sound, I will pick up here well-chosen adjectives in my personal compliments box:
First, the XL4 pre-amps are almost complete transparency and more neutral than the XL3, and the dynamics are first rate, superb!
The equalization is for its surgical precision rarely seen on a console-type sound, and personally I find it better than an Amek Recall, which is nevertheless a matter of reference, Great!
The summation of a complete mix, then it is more than certain that reached no transparency and the perfection of the digital console (note: subject of debate in comparing analog versus digital summing sound quality), plus it is extremely difficult to have a definitive opinion on this important element, but as I am party in the hoeing in the box compliments, I want to put the irremediable excellent!
The audio quality that emerges from this Midas are really beautiful, that said, it should be used in good conditions to really be able to realize this. Compliance with the transitional is truly amazing, and percussion instruments stand out in all their glory, with the incredible "ooomph" (headroom)!

The Rolls analog consoles assigned to lives and arts in general .. What else? So I installed, used and pampered as I know by heart, the least of its minor flaws (they are strong few ..), its limits, and especially what we can expect from this "little" gem .. In contrast excellence at a price, there is no miracle.
As soon as the production allows, I almost always request the XL4 in my technical rider to reach highest quality standards.