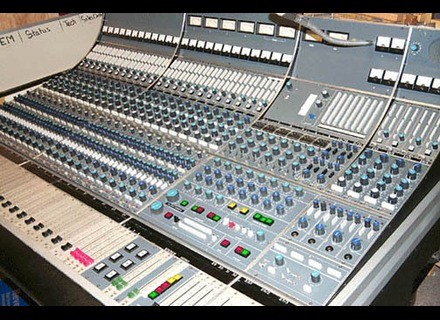 Neve 8058
5
The Neve 8058 is a vintage analog console that consists of 24 channels. As far as I can tell, the 8058 is the same as the 8068, only with 8 less channels. I did a freelance session at a studio recently that had one of these boards. It was the only session I've worked with a 8058, but the studio that I work at has a 8068, so I was very familiar with the make up. It's got the same preamps in them, as they are 31102's, which are essentially 1084's. The board also has 16 buses, and each channel features it's own semi-parametric EQ. This is an all analog desk, so no automation features are present of any kind...

Like an console, getting used to the Neve 8058 and learning all the ins and outs of it will take some time. It definitely helps if you've used Neve boards before, as even though I've only used this console on a single session, I have extensively used the 8068 which is basically this board's counterpart. The user friendliness of this console really depends solely on your level of experience.

The sound of the Neve 8058 is truly unbeatable. There's nothing quite like a vintage Neve console, as it's just got this vibe to it that is almost magical. It's hard to describe if you haven't heard it before, but it's got an incredible amount of depth and a very full, low mid presence. It can handle the recording of anything, as the equalizers sound incredible and can help you make any adjustments needed. If you're looking for the classic Neve sound, this is nothing short of it as this is one of the consoles Neve made in their prime.

Of course there are pros and cons with the Neve 8058, but the only cons are that of having an analog console, which requires constant care and work. However, if you're a professional studio owner I'd say it's worth it more times than not, as the sound is absolutely unbeatable. The Neve 8058 in particular is up there with some of the best Neve consoles that I've used, although I'd rather have an 8048 or 8068 for the extra channels and features. Having said this, the Neve 8058 sounds as good as any console I've used before.
Did you find this review helpful?yesno
»