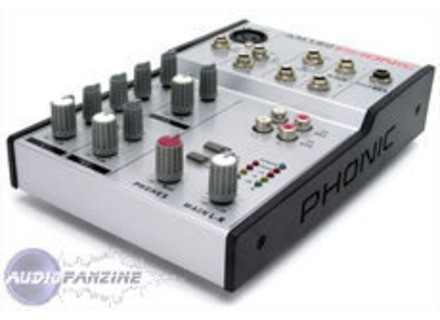 AM 120, Analog Mixer from Phonic in the AM series.

Basseman3's review (This content has been automatically translated from French)

Phonic AM 120
5
I have version of this console as seen on the photo, that is to say without the switch "Phantom Power" located below the microphone input on the left side of the device. Now, the console comes with the switch for 48 Volt DC.

Of course, it is not rack!

It has three channels: a single with two band EQ and two stereo without EQ. Output as there is a main exit "MAIN" stereo headphone output and stereo RCA output to connect the PC to record, for example. The netrée RCA stereo can be switched to the "MAIN" or the headphone output.

Unfortunately it did not switch to cut power in "AC Power"
on the device as bcp. Other consoles compact

Sufficient for "small applications"-for a band is a bit limited for mixing "ambulatory" fact "on the job!

The manual is in English only and there-especially for my "old model" (without phantom power =) some errors (such as "power switch" nonexistent mentioned on page 4 or the presence of "Phantom Power" in the table specifications on page 13 degrees. The manual is shared with the larger model AM220, which he has the "phantom power" since forever! There is a French manual available on the website of Phonic, but it does not yet cover new version of AM120 with "phantom power"

I insist on the Phantom Power is imperative because we do not connect an electric guitar or bass etc.. towards mono / microphone, as you may end up with +48 V DC on the electronic instrument that bears only 9V or 18V if the "phantom power" is active! The warning in this sense can be found on page 6 but it is printed "small" as "NB", one can easily "miss! Of course, there are some instruments that are designed expressly to be connected by a cable with XLR and electronics "is for", but these are exceptions anyway.

In short: "Phantom Power (should only be enabled to use condenser microphones.

I hope this point will be placed prominently on a new version of the manual.

Another conclusion: guitarist / bassist etc.. should carefully read the manual before starting.

Otherwise, the elements and housing are well made and seem to be quite durable.

LED "Peak" on the mono channel and the small peak-meter "to help multicolor LED well not to push too far the machine ...

The console is relatively transparent, but the blast appears on the single track after ~ 50% to 75% of the gain path and a little later on stereo channels, but nothing too serious. Normal for this price.

In general, I do not use EQ.

I use it for two years.

Since my amp has no input from CD player or a parallel effects loop (I also wonder why so few amps are equipped, because for me it's more practical than a loop series), using a small console is the only way for me to practice with music on CD. Thus, the output of the console I'm going to "single" on the amp head.

This model was the beginning for me in the small world of consoles and the quality / price seemed very correct.

For my current use is largely sufficient, but if I were to expand the use of an analog console (new instrument, more instruments to log in, stage ...) I'll probably see "on the Mackie.