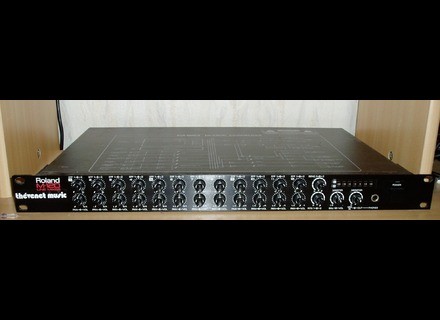 M-120, Analog Mixer from Roland in the M series.

Input pair separate control jack 6.3 mm asymmetric (the signal is injected only in the bus monitor)

Possible settings for the Monitor section: Volume for Volume + Master bus for input pair for the control

Meters sensitivity ranging from -20 to +6 dB and 6.3 mm headphone jack

WARNING: No mic inputs, it is a mix of table line only

This console is designed to prémxer synths. Perfect in the studio to avoid having to connect - disconnect - reconnect when the synths are a lot. In addition, it features a pair of control input, which allows you to listen to the headphone jack and a pair of monitor output recorder that records the result of the mix without creating feedback, for example. In addition, it has not one but two effect sends and even Master output XLR, and for this Cathegory table mix, but rather saw ^ ^

In my case, I primarily intended to record live for premixes synths before sending the result of the mix on my Akai DPS16 multi which has only 10 entries, two I intended for this purpose, 1 synth for producing patterns (eg, groove boxes) and one for the melodies and sound effects. Well, I already Behringer RX1602 but their main disadvantage is that they are only around 19 cm depth can not ask the imposing DPS16 it without resorting to expensive whereas with this flyghtcase Roland M-120 which is 28 cm deep, it&#39;s perfect to put over my Akai. Especially since we usually produce in small scenes. The space allotted to me on stage to record multitrack and mix before sending the result to the sound mix is ​​often limited. For the price of a 2 to flyghtcase 4U, I can buy much of these two secondhand Roland M-120, so no comment ... ^ ^ And again, I already use the Behringer for the studio. The Roland So allow me not to have to rewire décâbler and then almost the entire studio every time I go record a concert. Décâbler is easy, but then rewire, that&#39;s another story ... It takes time especially.

Above all, the volume buttons are not serrated, as is the case for Behringer: fine adjustments on stage can become so ^ ^ ^ ^

For cons, I am concerned about the reliability of both Roland as they seem to deteriorate rather quickly. Indeed, it was enough that I do not use them once live in a malfunction of the PAN is the first channel appeared on one of the two.

Anyway, I found a parade since: media for double synths. In fact, when I bought my Yamaha QS300 hand, the seller has delivered me up with a synth double. And then, oh revolution through boards, I can ask, for example on the support from the top of the DPS16 and ceului low tables mix used upstream. No need to rack consoles and therefore the choice of gear when acquired becomes much wider, no comment ^ ^ Well, I must admit that I was happily walking the synth with the double-hand because QS300 if not, I would have been difficult to get me because they are not given, new ...

So, I&#39;m really surprised. The Roland M-120 design is much older than my Behringer (90 years anyway ^ ^) and yet is quieter. Indeed, I measured: the Roland is 81 dB noise-handed my Behringer make only 78. If at Roland breath is audible, it is because there are the flexibility with volume buttons and Master! Indeed, so far to have a good signal, they should be set halfway only, twelve o&#39;clock position, no more, otherwise it is the saturation guaranteed. Except for those in effect sends the two outputs are very low. Indeed, they are at -20 dBm while the others are at +4 dBm. We must therefore put them in depth, it&#39;s a shame! I wonder why they put them at -20 dBm??

A Master output XLR balanced (and jack unbalanced, too), rare!

Depth of 28 cm allows me to put my Akai DPS16 above without using a flyghtcase, rare!

A Monitor output with volume control is independent of the Master! ^ ^

The power cable is secured to the device, I do not like, I prefer better when the cable is separated, it is easier to change if something goes wrong ...

Their reliability is poor (but hey, it&#39;s old stuff too)

Anyway, there are not many manufacturers who offer 1U. There is just the Behringer RX1602 and Rane SM82 which are currently produced (July 2006) but none of them have the depth that allows me to ask the above without using Akai flyghtcase. In addition, by providing a Rocktron but is also produced more Malhère one hand and shallow as the other. In addition, Roland is the only 1U to my knowledge to have XLR outputs Master. No, this is a product Roland again unique (as usual with me ^ ^). I even ordered a second, used, of course ^ ^

UPDATE January 30, 2010:
Has released another model that can advantageously replace: Tascam LM-8ST ^ ^