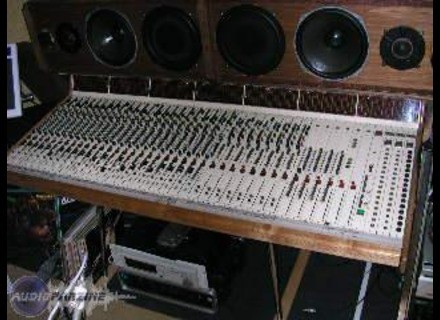 SAJE Odyssey
5
Model used. 30 ways more integrated patch. The configuration of the Odyssey is modular, the left side hosts the "producer&#39;s desk" and the patch 280 points in 6 rows. Channels in / out, type in-line, are distributed either side of the master modules, the latter being at the center of the console. So that if we take time to think about two minutes before its distribution microphone, ie working from the center toward the edges (as it should), it is still in the mid-point listens.

Once contact is established with the console, you see displayed all the supply voltages of the console. Each input channel includes:
-Switch to 48 volts phantom power
- Switch "line"
Oscillator-key (that&#39;s the side that emerges installer, years of galleys, it marks you a man!)
Switch, gain control, the system is no transformer, saving 60 dB in two bounds (Please note)
Phase inverter-switch (mic / line) without comment ..
The EQ section includes:
High-pass filter, 40 Hz, 12 dB per octave (more than enough for studio use).
3-band parametric equalizer, a true account of the slope efficiency and frequency, with the possibility of "Bel Shelf." A jewel of this equalizer, shame there are only three bands and not 4. Which is a shame, too, is that Saje is not a variegated correction mediums would be top or bottom (as on small Neve). One would then choose his path according to the proposed equalization, or simply divert its correction by the patch ..
The auxiliary
-6 Departures called Echo / to / headphones, screen printing and awards, and a = 2 headphones, 3 and 4 and 5 and 6 = echo and auxiliary colors differentiate the course starts. Of course, nothing prevents the use of departures 1 and 2 differently, for example to assign the headset to start a second effect. Also a button "insert" allows, as its name suggests, to insert at the appropriate time, an effect that was previously assigned to the path via patch.
-2 Keys solo / mute in a dénomée "PGM" (program), thus acting on the recording. The solo switches a relay to listen and, simultaneously, the VU meter track in PFL. So instead of being a replica of view of the recorder, which of us, is not used much, it becomes the VU meter and peak meter track. Note also that this version used for live recording, a touch of switching the meters comes to the aid of the user surprised by what happens abruptly on its way .. With its VU meter switched to PFL, you can quickly adjust its "Trim" and to its levels. This operation is performed, we re-switch on the recorder and adjusted the balance down. This feature, believe me, is really helpful in making live sound production or direct orchestras.
On the console, there are also controls levels of aux sends, there are several very useful as inverters:
-Soloed listening to the Program
-Cut of the program (remote control Mute Bus) with LED display
-Referral departures 5 and 6 in the monitoring (pre and post)
etc. .. Well, I will not list all the functions on this console, and I gladly pass the Master section quite logical and well thought out, but be aware that although size is relatively small, it is very comprehensive and intuitive in use. This console, I think, be found a perfect teammate for making small-scale musical productions. Especially since a novice user will find assisted by an excellent manual, and written in good Gauls, with all possible examples of use, the sound with a single microphone on a path to a mixing complicated type ".. I adapt .. "Through intermediate steps such as tracking, integration of effects, use of sub-groups UCA etc. .. To be quite honest, this is the first time I see a manual for a console, the former certainly of this magnitude, generally, fine manuals are paradoxically the preserve of small equipment type home studio. Bigger is supposed to know more you use it, which in reality is not always the case. M. SSL and others should seriously learn to was that Mr. SAJE ..

Very very good sound overall, including an equalization section of the highest order, bringing a "grain" undeniable and very pleasant, which some call ".. Analog warmth .. "T even need it that we agree on the very term &#39;heat&#39; ..

Little complaint about this console, you can however blame the Odyssey to be a console to use slow, I mean where the controls are rather manual, for example, to enter the mix position, one must switch all keys " In Line ", then all keys" Mix "and then activate the track" Master. " Okay. But simplifying the control circuit complexity also said, usually at the expense of sound quality, unless you have a console to a whole new level. That being said, the side also allows more manual hacks, trafficking, some users have the talent, and remove these possibilities would be harassment. It must still find a relatively complete automation existed in Optimix ..

See all 22 photos of SAJE Odyssey »