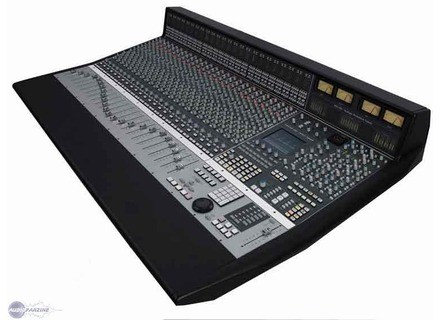 dromaludaire's review (This content has been automatically translated from French)

His intelligence design, however, remains even when the price level over priced even if it is true that it uner SSL!

19 people did not find this review helpful

SSL AWS 900
4
The SSL is a very compact model, it has 24 analog audio channels, motorized faders feature tactile serve both the analog part at the command levels of workstation software. This portion control surface based on the protocol "HUI" and therefore compatible with Pro Tools, but also Nuedo, Logic, Cubase, Pyramix ..
Probably for reasons of cost, the 900 series does not incorporate dynamic processor per channel, contrary to his (very big) sisters of the 9000 series, but offers two assignable processors, whose settings appear in the center section. Combine these two processors on one side and compressor expander / gate on the other ..
Each channel provides three inputs, microphone (dual-impedance), line and instrument selectable dedicated button. There are obviously the traditional keys to activate the phantom power, commissioning of the insertion point that can be placed, if desired, before equalizer via a button "Pre", pad, phase inverter and press "Flip" to reverse the global selection Mic / line made in the middle section.
The four-band equalizer with a touch of commissioning comprehensive, and is divided into two bands of type "Shelve", switch to "Bell", and two parametric bands and a highpass filter with a course selectable cutoff frequency to be between 20 and 500 Hz.
After the equalizer, coming departure, this console offers a potentiometer Cue A "and two stereo effects sends mono potentiometers.
The panoramic stereo acts, either via a button on the bus recording or mix bus.
Add to that another manager listens to "Surround" particularly studied and well done to obtain reliable features of professional consoles in revenge for the mixing in multi-channel is another matter, also remains very elusive SSL on this point, however, become important for consoles to type ..

I used this console for a few days recording and mixing to create a soundtrack for the multicast needs of a show, and to point the control surface of the AWS 900 is clearly not suited to this use, and there is still a pity we can not at least the console interface via a dedicated control surface (such as Prism) to this effect as its rivals can offer direct at Studer and / or AMS- Neve, SSL course other more model-oriented post-production as the C series, but the budget is not at all the same. is particularly unfortunate that the manufacturer offers to interface type for its 9000 series, and shall have therefore also been proposed that in its 900 series for a fraction of the price of the 9000 series ..
That aside, the use of this console will baffle anyone, it's still very instinctive and enjoyable to use. The control surface is thought, despite the only encoder available. No bug found despite the many parameters of the software DAW, automation, editing, and of course the management of all Plug-ins and hardware connected to the console (SDR Pyramix ..)

So how it sounds this console? Whether it's in making sound, mixing or recording, there is no doubt, is in the presence of SSL, the equalizers are very precise and effective. Moreover, speaking of the equalizer, it is switchable "Series E" / "G Series" to find the grain of his ancestors and listening is quite impressive .. The dynamic is of course followed, and the preamps are high caliber.
In short we approach the 9000 series for a fraction of its price ..

Despite obvious limitations, this console remains a formidable asset in the studio for its design, its audio quality, a high-end console at a relatively affordable price.