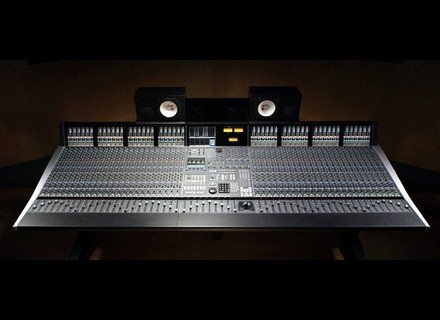 SSL Duality
5
The SSL Duality is a hybrid analog and digital console designed for professional recording studios. This is a really forward thinking console, as I haven't seen anything out there quite like this. Let me start off by saying that there's a lot that I still don't know about the Duality, as I've only used it a small handful of times. A studio that I briefly interned at had one of these installed shortly after I started working there. The Duality comes in three different sizes, ranging from 48 channels to 96, but the one I've used was the smallest 48 channel box. Each of the channels has two different mic pre colors on it, along with EQ, a fader, and all of the bells and whistles expected with a large format console. The unique thing about the Duality, is that up top it has a digital screen that shows you everything you need to know about that given channel. Take a look at a specs chart to get a better idea of everything available here.

Using the SSL Duality for it's basic features is as easy or hard as using any large console, dpending on your experience. However, bringing in the in depth and more subtle features of the board will certainly take hours of using it. I don't have a ton of experience using the Duality as I'm no longer working at the studio where I had used it before. Like any console it has it's own subtleties that will take a good amount of time to understand and get used to. If you own this console or will be using it consistently, it would definitely be a good idea to take a look at the manual.

The sound of the SSL Duality is truly awesome. It definitely has 'the' SSL sound that you would expect from an SSL console, which is a really clean and sparkling sort of sound. If you have heard an SSL console before (and you certainly have even if you don't know it), you most likely know the sound I'm referring to. Even though certain features of the SSL Duality are digital, the meat of the channel strips is analog gear, so you're still getting that classic, analog console SSL sound here for sure. This is as good of a sounding SSL console as I've heard.

The SSL Duality is definitely a state of the art console, and will really only be found in larger professional recording studios. It's really a great console on a number of levels. Basically you're getting the classic SSL analog sound, paired up with a convenient digital interface and overall advanced features not found on the older SSL consoles. Not only that, but this board will only take up a fraction of a the power you'd be using with an older SSL or other large format console. If you are in the market for serious, serious analog/digital hybrid console for your professional studio, the Duality needs to be considered.

See all 6 photos of SSL Duality »