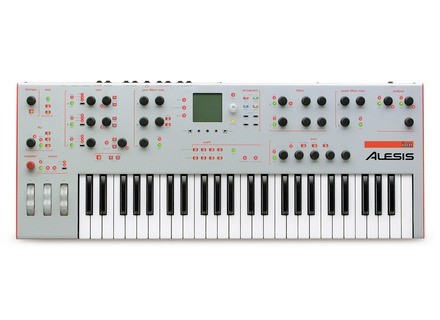 Alesis Ion
5
The Alesis Ion is a digital, four octave synthesizer that models its sounds after analog synths. It has three wheels for pitch, and two for modulation, all of which are assignable. It has both 1/4 inch connections and MIDI ins and outs. It is fully polyphonic, but can also be set to be monophonic.

While I wouldn't say that the configuration of the Alesis Ion is complex, it does take some use and time to figure out what everything does. This is because the Alesis Ion is an extremely versatile synth with a ton of different parameters. While this is the Ion's best characteristic, it also means that it takes some time to understand this instrument to its full extent. The manual for this is definitely helpful to have around when trying to master the Alesis Ion.

The Alesis Ion is great for all types of music, but I have used it mostly for pop, rock and electronic music. The analog modeling on this synth is very realistic, and the sounds you can get from this are far and wide in terms of getting different sounding tones. The feel of the keyboard is great, and it is quite easy to play, with an overall great feel. You truly have control over your tone, making the Alesis Ion versatile in terms of tone.

I've been using the Alesis Ion for about a year and a half and I have found it to be one of the better digital synths out there in terms of modeling analog synths. It is great to have all different types of analog synths sounds within one instrument, with all the benefits of a digital keyboard. The price is very reasonable for a synth of this caliber, and is a great option for anybody interested in getting some analog synth sounds with the convenience of a digital synth.
Did you find this review helpful?yesno
»

Alesis Ion
5
This synth is MSRP 800$ so we'll keep that in mind as I talk about the Alesis ION. Alesis kept this unit so cheap by putting all of their effort into the sound, so let me talk first about where ALESIS did not put any effort into. 1. The keyboard, its not as bad as everyone says but its not great either. 2. Polyphony at 8 voices its no Virus but keep in mind the MS2000 only has 4 and the JP8080 is only a little better with 10. 3. Effects.... well what do you want? 4. Arpeggiators....ok here is my biggest gripe, these arps stink, they are non user programmible and totally over-programmed and largely unusable, this may be fixed in a later OS but well have to wait and see.

The layout, really f-ing sweet here. You have four parts or patches to a program and you can map them across the keybpard as you like. Essentially the ION is a hardware version of Emagics ES2 3 oscillators, two filters, FM, noise , external input, two lfos and a S&H and a modulation matrix with a tracking generator, furthermore there are drive effects and standard effects. It has a great big display, and when you move knob the display jumps to that parameter (bravo bravo)also the knobs themselves have no settings, they turn 360degrees, I cant emphasize enough how awesome this is for live work and recording, when you switch patches and turn down a level or filter you dont get that stupid &quot;jump&quot; that happens on ALL other units. Also when you change the waveform of the oscillators the display shows the actual waveform, which i must insist you try if you can. In fact because of its ergonomics and usability I would really recommend this synth over the JP8080 or MS2000 as a starter synth for anyone interested in sound synthesis

Sound........phat.....f-in phat ass phat phatty phatness. I dont know about the patches. Considering i can make up a mind bending growling bassline or a silky smooth pad or a rhythmic sample & hold tempo based LFO trance stack in a matter of minutes with the ION i just havent bothered to sort through all the preprogrammed nonsense. But HOW does it sound, well it sounds very very analog-like thanks to the Alesis effort put into the DSP processors, there's even an oscillator drift setting that emulates the inconcistencies only found in analog VCOs. Anyway its largely a smooth punchy sound reminiscent of 70s synthesizers, however Im convinced you can get almost any sound you want out of this mo fo

Solidly built, i like the metal casing, the knobs feel great so do the mod wheels, only thing is that the keys arent as good as on my Roland A37, and they dont have aftertouch, but i think thats to be expected in this price range.

I used to use Logic Audio's es2 very extensively before I went the hardware route, I loved this synth because of its versatility and abilty to do ANYTHING i wanted. The ION has all the functionality of the ES2 but in a hardware interface, and it sounds................ well you will have to hear for yourself.......its thick and sticky, but also smooth and silky, its sexy and punchy (ouch), but can also be gritty if you want it to be.........wow ive just turned myself on talking about this synth so much i need to go synch my LFOs and detune my saw waves.....excuse me.

Originally posted on FutureProducers.com
Posted by: Unknown (January 0-, 2003)
Did you find this review helpful?yesno
»

bimole's review (This content has been automatically translated from French)

Alesis Ion
5
For specifications see below they are very well exposed.
-1 Point for against polyphony (not very annoying anyway) and flatness of the synthesizer, annoying as to the legibility of the screen but great in terms of design.

Ergonomics FABULOUS, sumptuous, BEAUTIFUL, GOD, exceptionally short I do not have enough adjectives for caracériser. It surpasses comfortable the Nord Lead 3 is yet a reference in the field thanks to the endless combinaision of knobs and widescreen. The two modulation wheels that light up proggressivement is the icing on the cake!
In short we have everything on hand where needed when needed.
Manuel almost useless. Note that the manual from the first version of the OS differs from reality, some menus are not in the same place in the synth, but nothing nasty.

Again Alesis was strong. A rich, broad, thick, precise emanates from this machine. It can also sound out the general purposes but is rather ... sweet! The filters are very expressive, the oscilloscope very rich (white and pink noise are huge), the awesome routing and modulation possibilities virtually endless thanks to the matrix-powerful. In short sounds are alive. Some bass are really thinking about the moog and some cloths to Jupiter and Oberheim, and sync so Pro-5. The effects are still a little behind compared to the quality of the whole. Having said this synth sounds great already dry (no effect) then can not imagine a multi-effects worthy of the name ...

This is my first "analog". I have a microKORG complement and complete two perfectly. I have since 2 weeks. I have not much back but I am pleasantly surprised with the sound quality, ergonomics and opportunities for that price (777 € chez Thomann).
A real "instrument" Music

Yvan_fr's review (This content has been automatically translated from French)

Alesis Ion
5
The best way to do this one ide of the bte CHARACTERISTICS and have a look at the Alesis site.
Anyway, in short, it's tough, from the keyboard that is too soft I got (note o)

Simple enough Dhaka, quickly found its brands to quon know little about programming analog synths and although lcran be a bit too small.
The manual? I do not know, I did not open!

So the no complaints! Cest all good, even back jarrive trs sounds close to my old Micromoog too tired to go on scne.
In addition, the sounds blend well in a trs mix with electronic instruments or else sound (bass and percussion).

In my opinion, two default:
- A keyboard too soft, but I am trained pianist, and no aftertouch
- Some buttons incorrectly positioned (select envelopes for example)

Apart from a, it's a pleasure vritable program and play with a report quality / price ratio.
Son La and sound!
And if jen took a deuxime?

Did you find this review helpful?yesno
»
Read the 16 user reviews on the Alesis Ion »

1 Published on 07/09/10
Alesis apparently have discontinued the A6 Andromeda and Ion synths.

View all 8 videos of Alesis Ion »

Alesis Ion manuals and other files

View the 5 documents for the Alesis Ion »