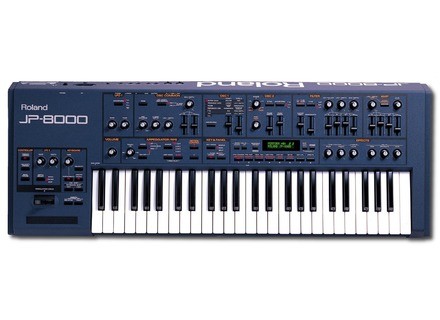 Roland JP-8000
5
It is only bi timbral and is only 8 polyphony. Also the lack of distortion and reverb still bothers me, maybee a third oscilator would be nice but isn't a must.

From the synths i have it is the most easy one to use, i think the manual covers a lot and is clearly written, they even mention how to create some type of sounds, for example how to create strings.

I have never had any problems with the JP and also never had to contact the customer support so i don't know about them, altough i think they could make more OS updates, like for example access does.

I sure like the quality off this baby, especially for string / pad type of sounds, it can also produce &quot;dutch&quot; trance leads very wel, the onboard fx aren't that great (no reverb, no distortion), maybee they could improve the fx section a bit and add more polyphony.

I like this one very much, use it in all my songs. For pure inspiration this baby is the king at my home.

Roland JP-8000
5
Extremely good performance control in terms of Motion Sequencing, Velocity/Ribbon assignment to any parameter, great Pitch/Filter/Amp LFO options for the mod stick......but.... The MIDI implementation could be much better.....and only a MIDI IN and OUT - no THRU? Come on Roland!

While programming sounds you hardly ever have to use the small backlit LCD screen. Having all the controls in front of you makes it a joy to use. The manual (in true Roland style) is often cryptic, but for anyone used to using synths, its doesn't often need referring to.

The light plastic casing looks fairly robust but I wouldn't want it to risk a fall from a keyboard stand. Control knobs are a little light but feel robust enough.

Very bright and clean 'Digital' quality about it. Not the warmest VA you've ever heard but that can mean it doesn't take up too much space in a mix. One thing you have to be careful with is the fact that the output can distort fairly easily. The synth best suits dance music (I produce tech/deep-house). Due to the 'thinness' of the sound at times, Bass, Treble and Chorus knobs are provided on the front panel, as well as Delay controls (Time, Feedback, Level). There are a few types of delay available and the Chorus control can be made to change to either a Phasing, Flanging or 'Twisting' effect. There could be a more comprehensive effects selection.

Whenever I'm about to program a new sound in the studio, the JP8000 is nearly always the one I turn to first. It perfectly suits what I play and I'd be very reluctant to sell it.

Roland JP-8000
4
Very satisfied with the features. Only real downfall is the number of voices it's capable of at once.

Tweaking the predefined settings is fairly straight forward and the menus for the UI are your standards for Roland. If you know Roland gear, it's very straight forward. If not the manual helps sort out the stuff that's harder to find. The manual is deffinitely geared more towards individuals looking to use it for it's intent, aka a VA synth. There is also a technical pdf doc that can be downloaded from Roland site that covers the technicalities of how the sounds are produced. Why it was omitted from the manual I don't know.

I'll deffinitely be hauling it to gigs. It's a pretty heavy duty machine, but not as sturdy as the old metal casing used with the S-50 samplers. Having owned an S-50 years ago, i do think that over time the contacts are going to wear out (for the keys as well as the buttons for the menus). They are easy to replace (at least on the S-50) and require very little saudering. Had to contact customer service to get the manual asi bought it used. The manual was on backorder, but it was still on my door in under 3 weeks.

Solid VA synth. It does have a few issues with sound clipping and popping if you don't tweak the settings enough. That's really the only downfall to it. Deffinitely focused more on the dance/electronic genre of music, but there are enough predefined patches to work from to apply it to others (namely the strings and organ sounds) . Has a handful of selections of different types of chorus's that can be applied to sounds, as well as panning and delay/reverb. It might be nice to see a few more, but i think going with outboard processors is the way to keep everything consistent in a track.

I think the JP8000 is going to be a long lasting item in my growing aresenal of gear. Just retro enough (VA) to be an enjoyment to use, but new enough to have the midi support that we all need. If you plug it into you midi interface you will see a constant signal coming from it for sync. I doesn't interfere with anything that i'm aware of, but i haven't found a way to use it or the menu option to turn it off.

Presets as usual are not tiptop malgrés some patches of quality, yet they allow to give glimpses of the machine's capabilities, said this is a synth, so each program as hear.

The only criticism that I would use is the config level modulations that deserved to be a little better organized, and the possibilities are limited.

The sounds may be suitable for many styles of music, although it is basically a synth oriented Trance / Dance at its output (not my style), it easily agree to another.

The sound is punchy, it was the beginning of the era of VA but he is doing very well, the quality is there, hair in a messy low when leaving the basic settings of some patches, but it is corrected not bad.

Besides reading reviews everywhere, everyone says that this synth can not do good bass, which in my opinion is totally wrong, and I'm not sure why because with minimal DIY we get at low that sound really good. This may be the "fat" side of analog lacking a little in the bass that makes the populace does not appreciate much of this point of view.

The sounds are not realistic, of course, is not at all done!

Too bad the keyboard does not have aftertouch, this says it well to answer control when using a master key that has ... The sounds are quite expressive, but little better.

The only thing that bothers me a little is the click click of the envelopes that I find not very good on this synth. They are certainly useful in some cases for smacking sounds, but it is not beautiful in other cases (especially when the release is 0) ... I did the last update (1.05) as it appears that solves this problem, I have not seen the difference at this level.

Also I find it lacks a reverb ... I finally today is not very complicated to stick a further ... but I miss her still.

I use it for two days, so this is a hot opinion, however I have another VA so I just compare, and is well positioned against the other and its own thanks to its unique tilt grain ( supersaw, feedback osc ...), the more I use it the more I appreciate it!

The value for money is very good today, its rating is relatively low for a keyboard that can do both, see VA better than newer and more expensive ... However, it is still limited functions, the modulation matrix suffers still not bad. BUT he is doing well anyway!

I do not particularly like the side plastoc synth, although it did not seem to have changed in 15 years (although this matter a little muffled scratch is relatively fragile (the previous owner had a label from scratch with I'm not sure what tool, so I have good big scratches ... yet bought in "new condition" according to its former owner ....). A positive screen for over 15 years does not seem to move a bit (though I'm a regular on the screen change bcp products this time ...)

Yes I would do this choice, it is a pleasure to use synthetic because it is faster to reach these goals!

Did you find this review helpful?yesno
»
Read the 11 user reviews on the Roland JP-8000 »

Roland JP-8000 manuals and other files