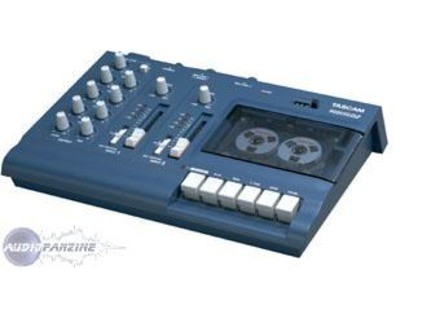 Tascam Porta 02 MkII
5
I got this off of musicians friend for $100 bucks. I got it this cheap because it was a refurb. Even though it was a refurb, it was like new when I got it. I got it becouse I wanted something to record on and this is the best and cheapest thing I could find.

I like how simple it is to use. All you pretty much need to know is how to plug in a guitar and you can use this. Another good thing about it is you can use it to hook up two guitars in to one amp. Kind of like a mixer, kind of not.

Like all other reviews about this product, people will say they wish it had more tracks. There's a way around that, though. All you have to do is record all 4 track, then transfer it to another tape. Then you play what's on that tape on to just one track. then you have 3 more tracks to work with. One thing that I don't like is you have to convert it from a type two tape to a regular tape, but that's not that big of a deal.

From what I can tell it is set up pretty well. I have had nothing go wrong with mine. As I said before, it is a refurb, but that hasn't taken away from it.

It's not a prfessional recorder or anything, but for it's class, it's a really good value. I would strongly suggest buying this if you are looking to get in to recording but don't have a lot of money. I give it a 5.