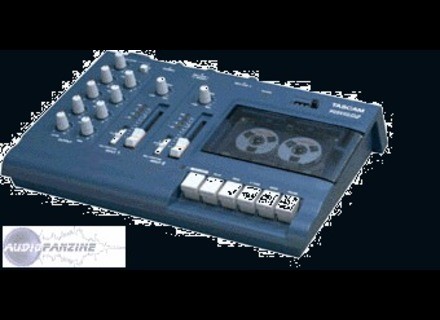 Tascam Porta 02
5
I paid about $180 for the unit and some tapes and headphones through musician's friend. well worth it!

Simple operation to get into multitrack recording. The thing is durable as all heck.

Only wish there were more tracks to work with!

as I said above, these are well made and the sound quality is very clear and precise.

great for anyone to make professional sounding demo's with the right equiptment and mindset.

Modulator18's review (This content has been automatically translated from French)" Another time!"

Tascam Porta 02
3
4-track cassette tape recorder, classical and effective if you crop the time of its release.
I bought early 1990 for about 800 francs (€ 120). It allowed me to do a lot of models, it was my first step in the multi-track recording.
No effects, no selector tape speed (some more elaborate models offered two recording speeds, knowing that the fastest speed gave better results with a "good momentum".
If I remember correctly this should be 4.75 to 9.5 cm / sec. This model has revolves 4,75cm / sec.
The bore 02 does not propose any effects (some did)!
The power supply is external (12v transformer).
It can record two tracks simultaneously.
For controls: Trim to select mic or line input and the volume and pan for each track. A meter of tape running and a volume for headphone output. More conventional buttons on a cassette player.
The recording level can be controlled via four LEDs (2 red and 2 oranges), recorded simultaneously on two tracks.

It goes without saying that this material is now completely obsolete. But he has done a service to large numbers of musician at the time and it was necessary to equip home studio. And have a PC, it was expensive: a 486 Dx with a 66MHz processor with 500MB of disk and 32 MB of RAM cost 10.000Fr (1,500 €). The CD 2x cost 1.000fr ... So we can say that a great leap forward has been made since then. I still wore my studio 02, keep it, yes because it is not salable, and it reminds me of that time "magic" where we still had time to do everything from A to Z without copy / paste DAW on a screen with a piece of compound 3 minutes ... Nostalgia ....