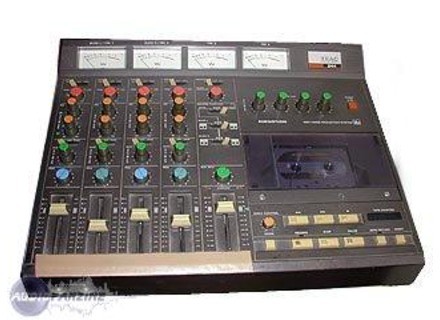 rouldug's review (This content has been automatically translated from French)

I stopped to use it in 1989 when I went with an 8-track YAMAHA MTX 8 But I kept it for that one day when I have time to duplicate my tapes on PC. I rowed with so I could not bring myself to throw it away or give it away.

What I loved most: the mobile side, simple to use and very innovative. The DBX was well dynamics. You could also saturate without the sound becomes necessarily yucky (long live analog!).

What I liked least: the extreme fragility of cassettes that supported hard excess rewind or punch in / out; also difficult to resolve and sounding preamps easily and hard metal (in this respect, the Yamaha MTX8 sounded much better); unbalanced jack inputs only (exit condenser microphones); often random and hard to control the long keys of the cassette; and then 4 tracks, it's short and the unit resented copies from track to track (merge) because the signal deteriorated horribly at each transfer.

Technologically, it is obviously archi outdated, but it's still a very respectable museum piece: it is with this contraption home studios have democratized.

PS Jeremy Gerard found the manual in pdf scanned on google; and just explore just to understand how it works.

jeremygerard1709's review (This content has been automatically translated from French)

Tascam Portastudio 244
hi, I myself 244 tascaù I found that by moving a friend, he gave me (I still Thank because it is very useful to me) but I would love to against the user employment in French if possible as there some trick I am having difficulty assimilating above notament level line and mic, thank you kindly help me ..

Tascam Portastudio 244
4
Why buy that old thing? To have preamplification worthy of the name.
My RME card does not have a preamp, and I was also looking for software other than EQ.
So I use it as a preamp.
There is not making a high impedance for guitar and bass, so better to go through an amp or guitar or bass preamp before going into the tascam.

From the outset, I particularly like the vintage look with the view to the old meters, but more importantly, the sound! The eq is very useful to me to emphasize certain frequencies, it is very effective.

It can connect jack or in synch with the sound card or other tube preamp and return to your favorite sequencer, and there ... heat gain is a remarkable guitar tracks, bass, anything goes!
To give you an example of the power pre-amp, window open, I plugged in stereo a pair of condenser microphones in my room, put a headphone and increased the gain little by little: there is a train that passes by 1 km from my house, and although it seemed it was 150 meters, and the amount the bass had was 60hz, I felt the earth tremble!
But I realized that with such a preamp, you must remove the computer from the recording room ...

Purchased second hand I got it for one hundred euro in excellent condition, but frankly even up to 300 euro or more it's worth it because it is a rarity.
I would definitely repeat again this election!
This is my first analog console, worthy of the name, until I get a real one. Ideal to give a punch to your songs, be it rock, reagge, blues, folk, jazz.
It's a small killing in terms of value for money.