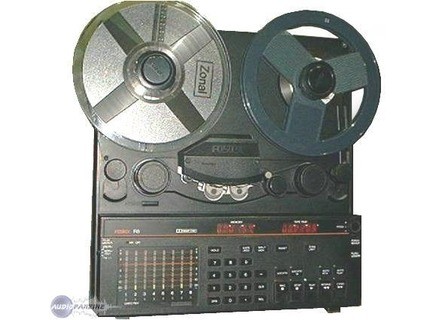 Fostex R8
5
This is one of the most influential 1/4' 8 track tape recorders within 90's electronic music, used most notably by Squarepusher and Aphex Twin.

All in all it is a good piece of kit for the home studio, especially if your doing a stem mix from a DAW. I have been using it for a year now to add the warm feel of tape saturation to my mixes, and on the whole it has worked flawlessly although tape prices have sky rocketed recently but thats not the multi-tracks fault!
I had used a Studer B67 which was on loan to me from a local studio but it didn't have hiss reduction and was an expensive venture to service and find parts for!

Personally it was a rather large step up in price that what i had wanted to pay but i knew that the unit had been well looked after and was serviced regularly which was a great ease setter as when these things go wrong they can cost a lot to repair many times more than what they originally cost. After using it for a period of time i have started to feel that it is an integral part of my work process and my setup and would be greatly missed if anything were to go wrong with it.

I think i would as i have grown to like the sound of saturation on my mixes and i think i would buy a replacement if it broke down and couldn't be repaired!

It really sets your mixes aside from the rest, adding a nice level of hiss to your mixes also it does give the ever so often said term 'warm' sound to your mixes. Plus it does look cool in the back of the studio with phono looms connected to it and the detachable transport.

how ever much it pains me to say this there are some bad point to this piece of kit, first being the weight as it is a heavy one to carry around and although its said to be portable its unlikely that your going to be able to take it on the train to any sessions. the second and final bad point is the counter intuitive built in computer that allows you to set points in the track for fast forwarding and re-winding.

Fostex R8
5
Magntophone I use this for many years. It is a compact ultra high 8-track tape. He has a great sound, warm and dynamic, with virtually no noise thanks to Dolby C. Do not rely on plastic appearance "Fisher Price". This is REALLY a tool for professional performance, with all functions of a large multi-track studio (pre roll, locator, punch in / out, MIDI sync with a box and optional SMPTE), available on the table Detachable side.

Previously, I had a Tascam 4-track 1 / 4 inch, 3 times heavier, 2 times more blast and two times less track! Ah, when I think that with this progrets magnto!

diffy's review (This content has been automatically translated from French)

Fostex R8
5
Agree with the description below.

this device is nice, just a little heavy to carry

Fostex R8
5
Ok always agree with the previous ones opinion. In re numrique at all, even if the purchase of tape is more difficult, it gives an analog magnto pretty things to the result. Shuffled with numrique is plutt nice.
Principal default: sync with one computer, but with a good song-pointer SMPTE has worked well.
Today, the re numrique at all, it can just stepfather "has been", but no, it's still a good machine, especially if you like the sound a touch of vintage and warm analog.

Did you find this review helpful?yesno
»
Read the 6 user reviews on the Fostex R8 »

Fostex R8 manuals and other files