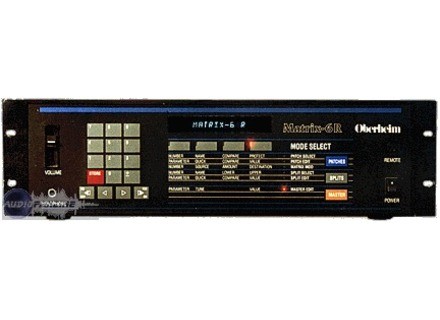 Daft's review (This content has been automatically translated from French)

Ideal for any musical style ideal in electronic music and movies

salamander's review (This content has been automatically translated from French)

At the diffrence Daft, I find that programming is tedious: 99 paramtres edit is a bit long without knobs.

Vritable a marvel.
The rack version is however more boring program (unless it is high on a table for example, but it is not my case ...).

Oberheim Matrix-6R
4
The Oberheim Matrix 6R is the rack version of the Matrix 6. Released in mid-80s, the last polyphonic analog synthesizer from a prestigious lineage. It is a kind of offshoot of the renowned Matrix 12: it is inspired in some respects, including a powerful modulation matrix, but is distinguished by the use of more "low end" and a limited interface with buttons Type "membrane."
It has 2 DCO through a low pass filter, three envelopes (plus a notion of "ramp", a sort of single casing), 2 and 2 VCA LFO. Some possibilities are offered to FM transition. It has a memory of 100 patches and a MIDI interface. He has the distinction of being bitimbral rather with the idea of the split keyboard but there are two separate outputs, which can be useful.
This is a 3-unit rack that resembles a very large calculator 80s. Physically, the box is sturdy and the buttons membranes do not fear the dust, which is probably their only advantage.

This big black box is used without problem as it is regarded as a simple analog expander. But when it comes to creating his own sounds, is another matter. In itself, the principle is very simple: we navigate from a list of parameters and changes the value of each, with the keypad or with arrows. The difficulty is having to repeat this scenario dozens of times, which is not very inspiring and quickly becomes tedious. In short, the Matrix 6 is not the instrument that encourages you to experiment and it's a shame because the engine noise does not claim that. The use of software can improve this situation but it is indirect.
The instrument meets the demands of the keyboard via the MIDI connection. on the other hand, if the update parameters via an external MIDI controller is possible, it is quite laborious. The exchange of patches via SYSEX arises as to do it no problem.

I have rather mixed review on the sound of the Matrix 6. On the one hand, he really brings the fish and the living aspect of analog, with a sound at once reminiscent of typical Oberheim full of good memories. The sounds of strings and horns are impressive richness and presence. The instrument excels sounds like "fat dark strings". The bass are also useful but suffer from an attack a little soft. The modulation matrix provides a wide variety of sounds with unexpected developments.
Despite this, I find quite frustrating the synthesizer and is probably due to its filter: between sounds dull or glaucous and sounds very bright, there really is no half measure. The instrument lack of nuance in between, so there is a whole family of fine and subtle sounds that are out of reach.

A good demo worth a thousand words, you will find on this page: demo ( http://www.arts21.net/index.php/studio/73-oberheimmatrix6r )

Between ergonomics unattractive and lack of finesse of the filter, I am not fully packed by Matrix 6R. However, it allows me to access his Oberheim for a small fee. The instrument has a very particular color has its charm and I am far from denying. In short, I do not recommend it as a first synth, but it is a good complement for a rich, raw and living away from the VSTi sounds sanitized. The racks are finally analog polyphonic few and I am glad to have it on hand.

View all 2 videos of Oberheim Matrix-6R »

Oberheim Matrix-6R manuals and other files