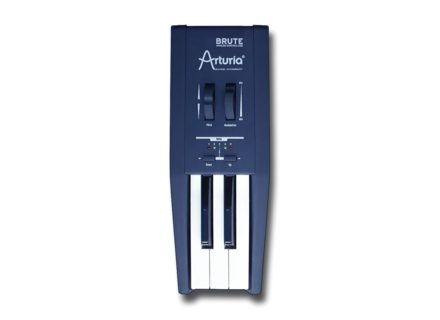 Anonymous 's review"Good, but it can't play B flat!"

Arturia brute
4
I had seen the demos online and after talking over the phone with jean michel jarre he convinced me of buying it.
It isn't 256-voice polyphonic but you can use two fingers at the same time, which produces the same sound as my cousin's Ford Escort when it blew up on the highway 12 years ago.
No need for a sampler.
The finish of the product is superb for the price, arturia has faithfully reproduced the ivory coating of my aunt's '73 moulinex toaster.

The sounds are very realistic:
It's the first device that allows me to reproduce, with one single finger, the famous sound of my cousin josé's 1978 2L Ford Escort.
The problem is that it's a rather exclusive device:
If you are more sensitive to the sound of the audi 80, you'd better take a moog, although, if you push it a bit you can come close to an opel kadett.
What I really regret is that it doesn't have more modulations:
A step sequencer would've allowed to comfortably reproduce the rising of the piston that presses the fourth cylinder.
On the other hand, when I plugged it to my playstation, it was a delight to be able to reproduce the solo of gran turismo in HDMI.
It's definitely the device's main strength!

I really love it but I'm thinking about reselling it.
I play in a martin solveig tribute band and we have a concept song where we do a medley with the concert for flute, harp and orchestra by mozart in the middle of the song.

I asked the salesman before buying it and he promised I would be able to play a B flat.
When I first got it I was stuck at the E and we tried to play the song stopping at the E but it didn't work.

I called the store but they wouldn't refund me.
However, they offered to give me a gift certificate instead because they would soon be having a special offer where you'll get a round table when buying 10 arturia brutes.

I'm not sure, though, so I'll wait a bit more and then I'll update my review...
Did you find this review helpful?yesno
»

It fits in your pocket, it's revolutionary!!!!
Did you find this review helpful?yesno
»

<3
Did you find this review helpful?yesno
»

Arturia brute
5
Super soulful! Ideal for musicians who play with one finger

Portable, superb sound, a must-buy!
Did you find this review helpful?yesno
»
Read the 18 user reviews on the Arturia brute »

See all 5 photos of Arturia brute »