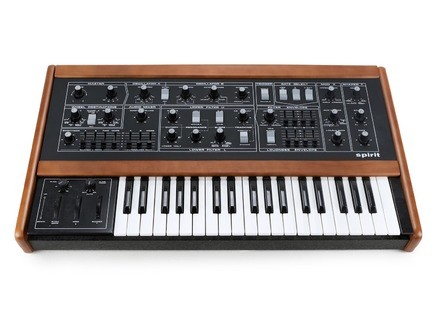 Crumar Spirit
5
For the record, released in 1978 after his first DS1 and DS2 synthesizers with enough innovative features, Crumar embarks on a new project monophonic synthesizer, but with a different team of engineers.
The Crumar Spirit was designed in 1982 (released in 1983) by Bob Moog, Jim Scott and Tom Rhea who was part of the same team that worked on the famous Minimoog Model D.

If the concept for the Minimoog in the early 70&#39;s was to take some major modules moog modular and integrated in a compact synthesizer without routing patch, Crumar Spirit has it represents a continuation and culmination of an idea decade after.

The dimensions of the Spirit are also also very, very close to the Minimoog see picture, but the sound still has a very different character.
The concept of Crumar Spirit is surprisingly original and routing than most analog monophonic.

It has 37 keys and a total of 49 controls with 24 knobs, sliders and a couple of switches 10, with 3 performance wheels to control the pitch, Mod-X and other modulation effects.

Both VCOs with synchronization capabilities, (B Oscillator oscillator A) offer a range of &#39;4 &#39;to &#39;32&#39; octave with several waveforms that triangle, sawtooth and pulse wave. The second VCO is also larger with additional settings such as Bass and Wide generator and a white and pink noise.

On the right there is the Spirit with all modulations designations Mod-X and Shaper-Y. It has a ring modulator, a Sample & Hold and arpeggiator with 3 different modes including "Ripple", "Arpeggio" and "Leap". Or you can play the notes held in the LFO speed, re-state the held notes, those played after high above / below, or you play the first note of the arpeggio normal, the second one octave, and third -1 octave to re-state cycle, or change notes to a much more complex now.

The filter section has three VCF resonant filter with low, high and band pass with a slope of 12-24 dB switchable with distortion.
And a 6dB filter is available in the path of Shaper-Y.
An independent ADSR envelope with normal or inverted with keyboard tracking and single or multiple trigger.

The first LFO has a switch to boost the high frequencies, it can be modulated from several ways and also has a red noise generator.
The second LFO called Shaper-Y with 4 waveforms including sawtooth, reverse sawtooth and square Sample & Hold, it provides a variable attack and decay with two-way symmetry.
The two completely independent channels, which are referred to herein Shaper Y-Path Filter and / Adsr Path, or the first measure of how signal is modulated, while the other controls the direct signal with the first channel.

An audio mixer to mix different sources, and a glide mode with auto and several possible settings for transitions effects.

The connections on the rear of Spirit is number 9 with 4 inputs, 3 outputs and 2 pedals:

Keyboard Pitch In
External Pitch In
Adsr / Mix Audio Out
Shaped Audio Out
Filter Pedal
Osc. B. Pedal
Keyboard Gate Out
External Gate In
And an empty slot to the south.

A facade modulation studied and ultra compact, which allows signal routing depth. It gives full control over the amplitude of the modulation. The sources can be routed quickly with the many switches in a very sophisticated routing to destinations.

Thanks to the many connections it is also easily place in a larger modular system. The external audio input is great for running filters, LFO or ring modulation. And controls multiple performance remains with the arpeggiator, CV inputs and outputs, pitch, modulation X & Y, 3 wheel modulation wheel and portamento.
Besides that it is made even more real to your playing technique because apart from the normal function where it changes the transitions to each note pitch determined by the Glide button. In Auto mode, it does so only when you play legato.

A source of sound experiments with a good grip, however to completely master all the tricks of the matrix and the extended capabilities of the Spirit, we must be patient because it is nevertheless difficult to understand where that complexity.

Spatial sound color, beautiful expressive with rich harmonies, a real depth and character of its own.
Not as fat as some, but with a much wider range and infinitely adjustable sound.
It is capable of excellent leads, bass rumbling register but it is especially special effects and complex and absolutely experimental evolutionary arpeggios.

The Crumar Spirit is a phenomenal synthesizer with outstanding features, it nevertheless has a few small hotspots like 37-note keyboard a little small and no aftertouch, no installation noon origin or too cheap and potentiometers, which resembles strongly to those of Buchla.

However there are ways to remedy this, there is also some change today with a new keyboard or completely devoid Spirit, with a midi kit or additional modifications installed for the use of modulation Shaper-Y through the Trigger and Gate signal for example.

But personally it not bother me so much.
If not for the rest, the Spirit has a flawless finish, with large buttons, sliders quality and a nice wooden frame.
They are also very pampered by the few owners and are often in perfect condition.

The sound quality is excellent, rich with live leads, fat basses, fx, complex and experimental sequences based Chips Cem it sounds very good, but not as a fat sound like some colleagues, however a character of its own and a unique and worthy of a modular matrix.

The Spirit is the last monophonic synthesizers brand and one of the most successful, but also rare and not always easy to dig.

There are two different models the first 100 copies produced for the U.S. market (often misinterpreted as the final number) with a lighter wood and about 150 models that are tinted slightly darker for the European market, which makes a total of 250 copies produced for all the Crumar Spirit.

Fairly finally for an amazing machine, but in 1983 a tidal wave digital has unfortunately left much room for analog.
The price remains so today but the only interest of money is his job, then no doubt, the Spirit remains unique.

It allows sound with rich harmonies and incredibly complex is a jewel of Uncle Bob, the first model with serial number 0001 is filed with the Bob Moog Foundation.
The Crumar Spirit remains with the extensive modulation capabilities, excellent machine for noise and experimental research.
The real feature is the performance tests and routing uncommon in an ultra compact and reliable machine.

And as Baudelaire said ... "What is created by the mind is more alive than matter."

See all 20 photos of Crumar Spirit »

View all 11 videos of Crumar Spirit »

Crumar Spirit manuals and other files