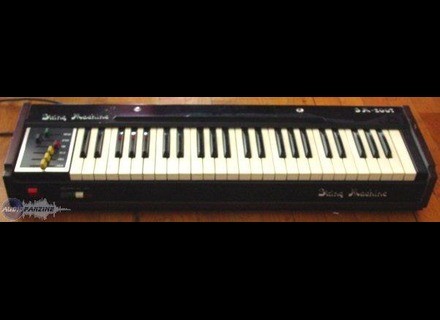 Nicko666's review (This content has been automatically translated from French)

Operation is very simple, the configuration of sounds and effects is just as easy, just beautiful

The highly versatile sounds are clear and warm, the effects are fully configurable and expression is great, as a small sustain a well-ordered attack will give you chills during an organ solo ...

I pocesseur of this type of keyboard and honestly nothing wrong, absolutely reliable quality of the keys is great, good resistance as a classical piano and the sound is just as wonderful ... even if it is not just recent I do not part with it for anything.

JEN SM2007 String machine
5
Four-octave keyboard (49 keys), Italian, unballasted, not sensitive, at the time: 1977 does not exist yet. This instrument is in fact an organ of its type of construction: 12 oscillators, tunable separately, is used to reproduce ensembles of violins, sounding very popular at that time, where the Eminent Solina reigned supreme. This was in addition Superstring a section of brass ensemble.

I do not remember having had a hand in the hands for the instrument bought new 4400 F at the time. I had to have one anyway, but there is no easier for the grip: one connects to an amplifier, you press a key to development and function of the desired sounds Hop, it sounds.

Ultimately, it is applied to a single type of sound, a kind of chorus for an overall effect. On this unit, you can disconnect the chorus for what is called: Solo.
Few settings on this machine but effective:
top left of the control panel, from top to bottom:
- Red button to start the vibrato with three slides: delay, speed, intensity
- Black button: Solo: disables the overall effect.
- White Buttons: Bass and Cello with their slide volume. These two low sounds are used in superposition with the other sounds on the serious part of the keyboard on a range of one octave and a half: to the ground. A small white line on the top cover defines the space.
The right of the control panel, top: Sustain a slider which extend the sound.
- 2 green buttons for Strings: Violin and Viola with a volume slider, and another called Crescendo to raise the volume gradually.
- 2 red buttons for the horn: Horn and Trumpet with their slide volume as well.

Purchased in 1977, I had only one concern with this instrument during dismantling of the top cover to perform a tuning of the instrument by sliding the cover back, I managed to break the pin that holds the spring that allows the first key serious DO stay in rest position. This key is no longer used, it was then continually pressed and then the note sounded sabns stop. After getting another key, not without difficulty, and his wound, no more problems. The key is not changed in the same color as the keyboard is cream colored and not white: it is what we see on the photo above.
It was and is an excellent tool even if it is passed today and that we no longer use this kind of sound. It was the cheap version and with the same sound of the Solina.

The sounds are very versatile clear and warm, the effects are completely customizable and is superbe.C expression is the string machine most interesting I have come across.

I'm pocesseur this type of keyboard and honestly nothing wrong, absolutely reliable quality of the keys is superb, even if it is not brand new I do not separate monde.Petit retail for anything, it is more compact.