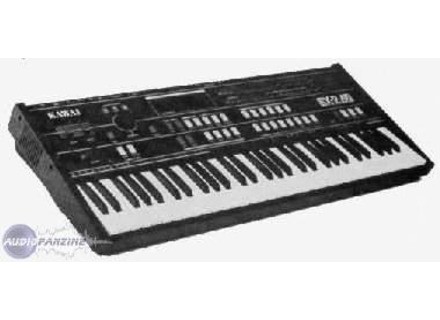 laurent BERGMAN's review (This content has been automatically translated from French)" Basic but nice ..."

The programming is a little easier on the machines on which you must enter a parameter number to be able to edit (like the Poly-61, Project-100, DK-700, etc ...). For editing, simply move the cursor with three buttons: Left, Right and Up / Down. The LED lights up and the parameter name selected and its value are displayed on the screen parameter, then the button is turned increment.
The Midi implementation is rudimentary: Note ON / OFF, Bender, Program Change and Release ON / OFF. But be careful as to the implementation of Release ON / OFF must have a model whose serial number is greater than or equal to K6897.
The backup is done, like on a lot of machines in this period, via a tape recorder (or an audio sequencer). Special mention for small backup system. Indeed, in KAWAI they pushed a little further. During the backup process can name the data file to be transferred. During the procedure of loading the data just before starting playback of the file, enter the file name to load the SX-240 and then play back the tape. When the data block which has been assigned the name is read, it is automatically loaded. It is true that today, this specificity is no longer in use, but it was a feature that deserves to be highlighted. It also can save some banks, depending also advanced for the time.
The assignment of polyphony and chord memory are little more substantial as well.
The sequencer can be synchronized with an external clock (drum machine or other via CLOCK IN) as well as a MIDI clock. Message priority external clock given to the MIDI clock.
Another feature: If the preset has an LFO effect, it can be disabled with the "DISABLE" button on the front panel and being active as the time when one is pressing the "START" button.

The sound is warm enough. The choice of components associated with the parameter ranges give it a pretty nice sound. Due to the small number of parameters and sources / destinations is not a synth research, which does not stop to take very good FX's bleep's and others. It produces beautiful pads / strings, rather round and present bass. The Leads can be quite successful as well.
The effect "SET" is also quite effective, different chorus Juno-106 for example.
I stretch out me no more on the subject, the sound is quite subjective and a history of personal taste. Some demos on the net are more explicit than words.
The big advantage of the SX-240 is that it is bi-timbral, either "DUAL" mode or "Split" mode. Mode "DUAL" can sound much bigger (at the expense of polyphony, it is halved). Mode "SPLIT" allows for him to flatten quickly a bass line and a melody.

Personally I like his sound a little different from other machines in my setup. What it does, it does well.

The +:
The bi-timbralité
The faster than its competitors time edition
The effect "TOGETHER" deep enough.

The -
The Midi Omni, which requires a use case is a Midi filter or sacrifice Midi interface port.
The rudimentary implementation Midi (Midi but it is unlike the SX-210).

I said that the notes I assigned reflect its potential in terms of its year of manufacture. Today we did a lot better ergonomics issue, performance, excessively further modulation matrices, etc. ....

3114's review (This content has been automatically translated from French)

A wheel to fix everything, like a moog source or atc
called parameters and are easily adjusted .. everything falls to hand very quickly and clearly
the wheel is very well made
is a synthesis well finished and solid, it is metal, the sides are imitation wood mtal ..

)
it is not specially Lger

Sounds 80's ultimate
roland and korg different from this era
This synth sounds often make me think of the scarface soundtrack by Moroder,
it's hot at the same time a little hard, glassy ...
It has the sound of her look ,...( hard to explain ..)
on youtube there 's a good demo of some mad beast
say it does not sound like something else ..
not a synth "very punchy", on the other hand he has other strengths that make it very .. spcial and endearing

Great sound, just the jupiter 8 of poor (but with her well ..)
with 2 layers of sound one can go far
solid state filter microtech!
Pure mouth ...
synthesized asser rare, it becomes expensive
beefy
I recommend ..

Kawai SX-240 manuals and other files