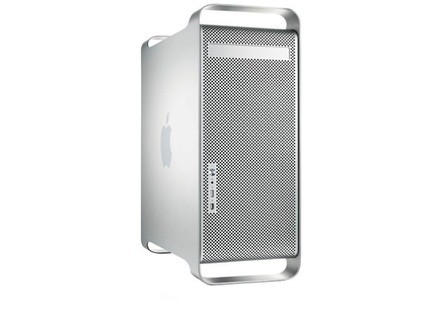 Apple Power PC G5 Dual 2.3 Ghz
5
The Apple Power PC G5 Dual 2.3 Ghz is a fast computer that’s best helpful for processing large bits of information, like in recording audio. The studio that I work at has this computer in our Studio C, and I’ve never had any problems with it at all. We’re running it with a Pro Tools HD system that’s pretty much capable of running you might need it to. I don’t know what year the computer was made, but in addition to dual 2.3 Ghz processors, it’s also got 8.5 GB of RAM. This is most likely going to vary computer to computer, but those are the specs that we’ve got on ours. We’re running Pro Tools 8 on the computer and I can’t say that I’ve ever had a problem running a session on it, although the most tracks that I’ve ever needed to record at once as only maybe been five or six. Even though it’s not the latest and the greatest in terms of Apple computers, it’s still very powerful and is definitely suitable for use in a professional studio’s system. Most of the Power PC G5 computers should be pretty close in power to this one, so even if it’s not the same specs as this one, you’re most likely going to be getting a solid system. The upside to the Apple Power PC G5 Dual 2.3 Ghz not being the newest computer out there is that it’s not going to cost nearly as much for it. It’s perfect if you need an extra computer for a second room or even as your main system. Every computer is going to crash here and there, but I’ve yet to really experience that with this one yet, although I’m sure it does happen now and again. These are very good computers and definitely capable of getting the job done for audio processing and recording.
Did you find this review helpful?yesno
»