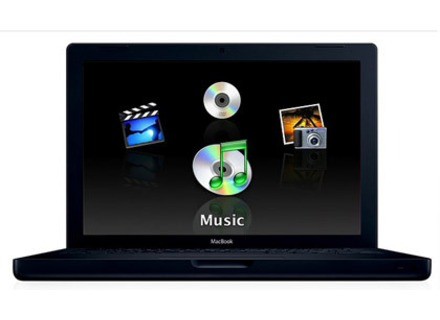 Apple MacBook 2 GHz Intel Core 2 Duo 1 Go 667 MHz DDR2 SDRAM
5
I have had this laptop for 3 months now. What do I like about it most....? EVERYTHING!! Especially how compatible this thing is. Just about every program you can think of works on Apple computers thanks to the new programs that let you run Windows simultaneously with the MAC OSX. Other sweet features? For beginners and people who just want to print an idea, Garageband is amazing! Some might not agree, but before I got Logic 8, I was totally cool using this as my production suite. Again, I know its &quot;small potatoes&quot; compared to the nice Pro Suites, but they didn't skimp on the options, tools, effects, instruments and quality, so its great on many levels and I know many people who use it as there main program. I actually got Logic 8 recently, but you will have to read my review on that (its the best tool I have ever had for recording/producing music ever). What I like least about it? So far, nothing. I have owned PC Laptops in the past and this thing blows them away in every category. This is the only Apple laptop I have ever tried so I kinda went on a limb when I bought it, but I felt confident after reading lots of reviews and talking to my fellow musicians/producers who use them. I got mine used for a great deal, but even paying full price (go to apple's website and fill out the &quot;Student Store&quot; info and get an even better price) is worth every penny. If I didn't own it now, I would be saving up hardcore to get one immediately (i.e. eat only noodles, hitch hike to work, give plasma...haha, whatever it takes). If the one I have was lost/stolen or broken, I would first cry for a week straight, then do what I mentioned above again.
Since this review didn't ask much of me, I am going to continue by telling you what I use this baby for.
Main Uses-
1 Audio/Video Production- With Logic 8 you get so many options and features that you will spend hours, no, days learning and expanding your abilities. Logic is a monster, if you can tame it and get it on your side, then nothing will stop you from making very high quality music. As for plugin compatibility, my friend once described Mac's and Logic as &quot;ladies of the night.&quot; Basically they are wide open for anyone or anything to come on in and party (hope thats not too offensive for the light hearted). I use a Presonus Firebox as my interface and it does a hell of job with virtually no setup. Just plug and play. I had to do a little setup when I used some plugins in standalone mode, which brings me to my next Main Use
2 Virtual Instrument - With the ton of VSTs I got with Logic and the other ones I have recently bought, I can show up to a gig with two midi controllers, two sustain pedals, two usb cables, my audio interface, a few audio cables and my laptop (everthing runs of usb/firewire power so the computer is the only thing I need to plug in, wow!!) and be fully capable of almost every sound, sample, and effect I could possibly need. If that sounds like a lot of equipment above, then you aren't a instrument nut like myself. To get all the sounds I needed for a live show pre laptop, I needed to fill my car and sometimes a friends car with synths, a 88 key rhodes, analog effects, huge amps, tons of cables and lots more. I am not a fool, a real rhodes is going to sound way better than most if not all emulations, but when you are gigging/practicing at least three days a week, its nice to have tons of options in a rig that ways all together 60lbs (88key midi controller is about 50lbs of that total). When I go bare minimum, I bring my laptop and my M Audio Axiom 61 and its enough for any keyboardist/sample manipulator to feel strong and full of sound.
3 Live recording- I do not own a multi channel Audio interface yet (minimum 8 channels) to do serious live recording, but when I do, this thing will have no trouble recording my band(s) live performances while I am using it to perform live (4gb ram is pretty key for this).
4 Audio synced Video Projection - Ever been to a show and the band has a huge projection of anime or clips of movies or just weirdness up behind them. Hook up a projector to this puppy and build/run some samples through Logic or Final cut express (comes with Logic studio) and you will be able to do the same. This is a lot of fun.
Other uses
I have decided to not worry about this aspect. There are so many little cool programs and devices that come with this computer that It would take to long to explain. If you are a serious musician who needs all of the tools I said earlier, then you need this computer (or one more powerful). It will blow your mind.
Here is a reiteration of me and my laptop live
Playing live VSTs, triggering drum samples and ambient samples, syncing visuals and projecting them on a large screen, recording the bands preformance, and playing songs from my itunes during set brakes.
Did you find this review helpful?yesno
»

bwd's review (This content has been automatically translated from French)

each day for the past one month and a half

the -:
uh Indeed, nothing yet ... or maybe the graphics card if you plan to inefficient play it ... this is not my case

no it's my first laptop, I have been tjr on windows and I discover with joy that OSX is really excellent. Note that I also installed Win XP with bootcamp and it runs like clockwork.

excellent value for money, in the range 13 ", the PC equivalent performance are expensive .. +

without hesitation, if javai a bigger budget perhaps I chose a MacBook Pro 15 but 'it bothers me a bit, really wanting a ultra portable station
Did you find this review helpful?yesno
»