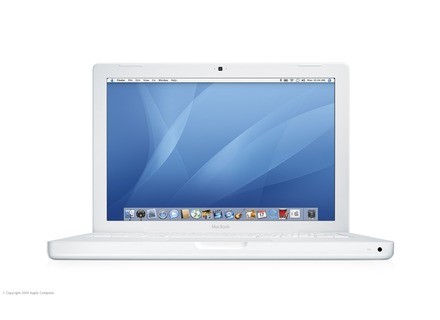 Macbook 2Ghz, Apple Laptop from Apple in the MacBook series.

What I like most is that it's a Mac!
Before I worked with a Toshiba laptop with Windows XP, well it is day and night, ergonomics, ease of use, only thing is not as powerful as a desktop iMac obviously, but it s' comes out anyway: when Logic Pro crashes because the hard drive or resources are insufficient, they say "ok" and then continues to work as if nothing had happened! So he does not like being "surprised", but after that runs anyway!

I think it's an excellent quality / price ratio, especially for an ultra-portable!

I would definitely do it again this election! I never put too little time to start up a computer! With the PC I always complete the installation of Windows that is slow, then I do the household, etc ... There are basically returns its name, and it works right away, no gadgets in the nut must be fired!
Did you find this review helpful?yesno
»

Apple Macbook 2Ghz
5
I have less than a year. Before I was on PC but tired of all the issues that generate PC I went to the enemy. I damn well done!
The MAC is fast (well I boosted but the base is already fast) and no problem.
I would do the same choice!

Vive MAC!
Did you find this review helpful?yesno
»

Apple Macbook 2Ghz
5
I have been using the less than one month,
I had no crashes, no reboot.
When the battery is flat (after 3:16 consumption and the screen), it s off but remains as is, when we back on that s not a reboot, all applications are there. As far as I can remember. I do not start it so that once a week.

J uses the Internet without having to install a virus, no problem, for after what they told me apple = no virus, so no update ... peace.

impecable design, c is bo, ca turns, it makes no noise. But not really.
j have recently exchanged files with a portable pc, c was the day and night noise levels.

the least: the number of USB ports. Clearly. Maybe the screen, but in the MacBook can find more. Size 13 "also has its advantages.
Bomb 13 "
Last note (17 May):
j appreciates intuitive management (and therefore limited it going together, though not so limited that ca) parameters, such as sound cards. J edirol my lighter and the sound goes directly into this one, almost instantly.
It changes Windws with whom I had to mess with my audio settings, turn off and restart the application ... phew!
Did you find this review helpful?yesno
»

Moa's review (This content has been automatically translated from French)

A day of use
taken out of the box and we light
first mac for me, getting used to about 10 min
1329 euros for a 2GHZ with 1GB Ram and 120 GB HDD and a bluetooth mighty mouse free (card forced Fnac), pretty decent.
very fast and ergonomic mouse is great, installed in minutes & without cd rom, for me it is really new.

I'm not disappointed at the moment

Installing Logic Pro about 20 minutes of file copying. It was not until I pay 329 Euros to update my PC version 5.5.1

It's all quite easily I get a demo launch fairly loaded. A stop disk too slow once or twice in the first launch of the reading, caching requires.

What surprises me is the next "it works", no surprise, I'm already in operation to work in about 2 hours.

Finally the new Core 2 Duo seems less heat than the previous generation Core Duo I find it warm but it's even supported.

The fan goes off that charge and is rather quiet.
Details soon.

Updated: very fast and fun to use logic in no slow down when well set. A success in every way. it turns to dead!
Added 6 months ...
Really fast I load the beast to death with no prob with the onboard sound card and it runs no prob and no latency.
I just invest in a FIREPOD, I plug in directly and it works no cd no, install in 4 seconds time to synchronize the rack, it amazes me still.
I can read a project with a 20aine audio tracks with no prob with the internal drive ...
By the way no crashes in 6 months ... Logic either.
No virus of secu no prob.
The daily use in office and internet is super fun.
A reproach, the pack is super slow motion on that machine I think I'll uninstall it for a free pack.
Cest really stealing, taking good word starting 10 seconds
Logic starts as fast yet it is a much heavier application and operates the most hard.
In fact 1GB of RAM is more than enough for audio if you use too heavy of plug samples
In multitrack audio as I use it very wide, with some virtual instruments and EXS24 ...
Playing with this machine is only possible with old game or making concessions on the resolution and details.

I pass the note to 9 ...
Did you find this review helpful?yesno
»
Read the 5 user reviews on the Apple Macbook 2Ghz »