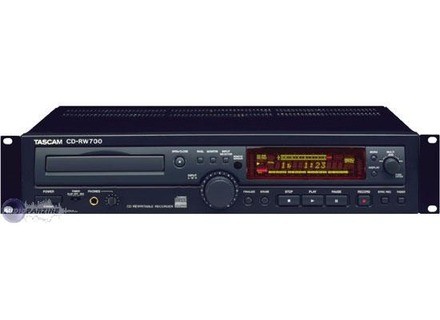 All user reviews for the Tascam CD-RW700

Tascam CD-RW700
4
The Tascam CD-RW700 is a discontinued CD recorder. CD recorders like this aren't really necessary in the world of Digital Audio Workstations, but the professional studio that I work at still has one of these set up, and I would think that you'll find many pro studios out there that still have them as well. These are certainly better CD burners than those you'll find in computers, so when burning a CD from the source in the studio we still use this to do the job. Of course sometimes we'll do it on the computer to save time, but if it's going to be a master CD, it's always done with our Tascam CD-RW700. I've used a few of these before but haven't ever had a need to use one extensively or get too in depth with it beyond making a simple CD, so I can't really speak to the more in depth features of the CD-RW700. Having said this, I wouldn't think that too many people out there are still using this for anything other than simple CD recording/burning. This device does sit in a rack mountable casing, as it takes up two spaces in a traditional rack space. While there are some benefits to using the Tascam CD-RW700, I wouldn't say that it's necessary this day and age and would really only recommend having it or something like it if you're going to be using it in a professional studio where a lot of masters are made. Even so, you could get away without using one if you wanted to. This having been said, if you do find yourself in need of a nice CD recorder, the Tascam CD-RW700 is more than capable of handling everything you'd need it to do and even though I only have a few other models to compare it to, it's probably the best one I've used...

studio35's review (This content has been automatically translated from French)

Tascam CD-RW700
5
- I used 2 for 4 years in fixed and mobile.
- Plus: REC instant boot (after the Pause / Rec Inrush) thanks a memory buffer, which is not the case in forcment other brand
- Hardware perfect, 100% reliability
- I would do without this choice pbs.

Tascam CD-RW700
5
I have over 5 years.
He walks impeccable, a kid 3 years old can use it.
Fidler is the sound source.
I did not see a default
I use it to burn the men coming out of a Roland VS2480 or Fostex FR2 and it's perfect.

freetek's review (This content has been automatically translated from French)