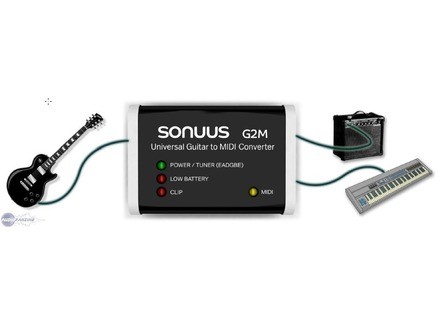 All user reviews for the Sonuus G2M

Average Score:3.7( 3.7/5 based on 2 reviews )
Value For Money : Poor
Buy this productView price information >
Not satisfied with those reviews?
Our members also liked:
Buy at Sweetwater

Sonuus G2M
5
The Sonuus G2M is a guitar to monophonic MIDI converter designed for the everyday consumer. Before this (that I've seen at least), the cheapest device that could convert guitar signals to MIDI was the Roland one, which requires a pick up to be installed on your guitar. While this is indeed only monophonic, as opposed to the Roland which is polyphonic, the price of the G2M is unbeatable at only $100 US. The G2M is a digital device - so small and light it will surprise you with what it can do. It runs on a nine volt battery and has 1/4" connections for guitar input, thru (to amp or elsewhere), and a MIDI output to send to your MIDI device - I've been using a Yamaha Motif and the virtual instruments on my computer for this. It's not rackable - it's more or less a hand held device that should sit on your amp.

It's super easy to set up and start using the Sonuus G2M as it's as easy as plugging in your guitar to your MIDI device and that's basically it. The thing that you'll need to get used to is playing your guitar with it in terms of the MIDI tracking. Overall it plays quite nice for what it does, but it does take some getting used to as in order to properly trigger the MIDI notes you need to play very cleanly. Of course more experienced ax-men will have an easier time with this. It does come with an extensive manual but won't be completely necessary for everyone.

The Sonuus G2M doesn't make any sound of it's own of course, as the sound will only be as good as your MIDI device. That being said, it's a great tool for all sorts of reasons, but the capacity that I use it in is for blending my guitar parts with MIDI sounds. Especially for a guitar solo it can sound really cool to have a synth perfectly doubling your part. There are a lot of ways to use the G2M, this is just one way...

Overall, the Sonuus G2M is an awesome little device for an even better price. At just $100 US, it's worth it for any guitarist to have around for use. It really opens up a lot of doors when it comes to getting cool and interesting sounds with your guitar, not to mention you can record MIDI with your guitar to change sounds later or to turn it into notation. This is definitely more than worth the price!!

rexbegonia's review (This content has been automatically translated from French)

Sonuus G2M
3
Electric guitar MIDI converter
Not generate any sounds! Made to fly with your MIDI guiatre via a synth or VST or any other software on your computer
(Reason, Logic ...)

Very simple config
An input jack and midi output, plus a thru to connect in parallel to an amp.
Integrated Tuner
Boost

Big black spot: it is monophonic, so no gaming agreements.
Latency is still significant and can be troublesome.
The tracking is also limited, he sometimes get from time to time and therefore you out a different note than the one you played.
It must be very careful about his game, the advantage is that it teaches you to play clean!
When you play a little faster it's hard to follow, which is a bit frustrating.
One little qd Similarly, once you tame this little box, out sounds interesting and usable

-: The plastic housing does not seem very resistant
tracking
Monophonic
value for money (95 € I think it's a bit expensive for what it is)