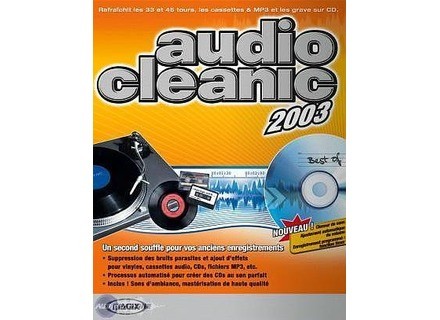 charlatan transfer's review (This content has been automatically translated from French)

PC Pentium 4, 2.4 GHz, Windows XP
No problems running
No crashes on this application

Used for 6 months for transplanting the old K7 records or reporting of Minidisc. Its interface is enjoyable to upload, process and export files.
Many treatment options files, or on global phragments spars with all denoiser, DeClicker, dehisser, and management of the compression, and the effect rverbration st ro, with everyone from pRSET or CSTA interface SPECIFICATIONS (vintage!). Too bad the intensity rglage not indicated by a value numrique.
I also can ask TRS apprciable markers on the beach flying time signal or playing. The module operates burn CDs nickel.
Discoveries rcemment, but already well used to a possibility of mounting a work space divided into two, or a track (Stereo) "parking" and another work . We pass the ends of files from one space to another by simple drag / OPDs, it gre length of phragments Manir virtual crossfade and a small hop, round is played. Srement simplistic but effective. It is the regret that a work plan (display signal) a bit cramped.
Trs good report quality price.
Did you find this review helpful?yesno
»

goldfish2's review (This content has been automatically translated from French)

Magix Audio Cleanic 2003
5
-Installation a breeze.
-No problem of incompatibility up Submitted.
-Configuration gnrale easy even for live recording from an external sound card.
I have not read the manual (that is to say the clarity of the interface ...)

* I use it almost since its release to acquire: MiniDisc, vinyl, instruments (yes, really), in fact everything possde audio output (mixing and effects of the tracks diffrent BMD in our group have been done with this software).
* I like it super simple acquisition, the possibility of rgler volumes Systm directly from the software interface (the volume of acquisition is gauged by the software and seeing a rglage tells you if the volume is satisfactory), the possibility of using plug-ins from other software's (cubase, Direct X, SoundForge ...) to apply effects to the sounds acquired.
I made the purchase of instruments from an external card thanks this software, a 10x took me less time than cubase vst ableton or other (but need not RVer even when, as are two of the best tracks aclinic), I used the APRS diffrent audio tracks purchased on another audio editing software (which has several tracks) (you will tell me that cubase too complicated but it's complicated.
the report is qualitprix trs for designers to use a semi-professional or not.
with the exprience I buy double (arf, arf ...)
Did you find this review helpful?yesno
»