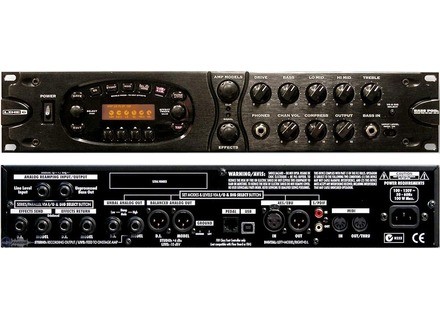 VicMacKey's review (This content has been automatically translated from French)

Line 6 Bass POD XT Pro
4
It's an amp simulator that mule amps and effects of prestigious brands, most of these are vintage equipment. For more information go to the line6 site.
Everything is numrique. Everything is ditable PC via the USB port.
The connection is complte trs. Impossible to take into default this unit, anywhere can connect and synchronize with all other devices in a studio. There are jacks, XLR, MIDI, SPDIF, USB and RJ45 for a specially adapted type pdalier FBV.
It is a 2U rackmount MODEL.

Gnrale configuration is very simple at first: one arm, turn a few knobs, you can play: it works.
The effects are chainable and accumulated over a preset, evolution from the Bass POD Pro. It is active and disables these effects at the touch.
Editing sounds is very simple. But better read the manual to see what we do. One provided is in English but a silent French version available at line6.

The main use I will make this machine is recording, at least I do not use it in concert or even rptition only in home studio. In rptition or in concert, I stay with my amp and my pedals plug and play.

This is my drummer, and a golden opportunity to lower price (150euros, I saw the price of Pod Pro XT but not) that convinced me to take one, yet I had no jur modlisation never come back. Well, I have exactly the same sensations that the era is to say that for me the sound is not as good as that of a SansAmp PSA1.1 but I recognize that this trs machine is flexible and allows you to record the bass and quickly.

As for the sonic possibilities, it was available amps moult, moult speakers, microphones and moult moult effects. This multitude of possibilities that we find ourselves in great menus and some buttons that provide functions moult. In the era, I found it trsrbarbatif. Today, I will take the time to build sound that I like, even if I do not know why, the machine gives me a constant feeling of neat sound any evidence, at least that is my impression for me who loves the bass sounds a bit analogue or cradingues Lo Fi.

So a sound plutt own, we have recording capabilities, covering almost all needs (its clear his line simultaneously), and can be r-Amping abundance. I REALLY redcouvre this machine at an angle diffrent, but I focus on the record, no way to use it outside.

If we want the same sonic possibilities and the same connectivity and better, it will make an investment out of proportion to the l.

I had the Bass Pod Pro before this one and I was well liked that machine. I also test the SansAmp PSA1.1 which is very well.

What I see is that many studios are pro team! The success of this machine RSID is that it can record sound from a quality quite impressive for the price. In any case now can be used to trs deals, the era I found it less true because of the side lifted the machine.

In the end, a working srieux for the studio. Watch the second hand market as there are good business to do, especially since the Pod X3 Pro is on the march and that principle, does not normment of revolutions and am ments if you only play the bass.

Budha bass's review (This content has been automatically translated from French)

I miss an exit numrique "optical" to make me happy!

For me, nothing too complicated!
I have the manual in English, but am pretty "fluent" in English so good ...
A French version is available I believe in more.
lack may be more clarification on cetain dtails techniques (but looking for the small box)

I did not post notice before because I did not know what to think.

I had the opportunity to do a concert not long ago and in another group, bassist used the SVT head modlise (perfect state and Anne: 1974, j ' No not even shut!)

curious to know what was worth my pod, I asked if we could test to see the difference, of course, accept it and thank him again.
in test pod + power amp in cabinet and SVT810
SVT head + cabinet SVT810: this seemed equivalent: big astonishment from us both.

then another test:
+ + pregnant SVT810 head back with a SM57 microphone (I'm not sure) on the right channel sound
pod (modlisation SVT + + SVT810 20 cardioid microphone on the left channel of sound.
We placed approximately in the center, silent trs it difficult to see how silent the "real" from "false"

which is also on is that this thing modlisation qualque diffrent compared
SVT rcente a head. Proof if any REALLY need compared with the same original annes.car an SVT head rcente does not sound like an SVT head in 1974.
supporting evidence!

(Unlike the view of Thom_bass, do not just test the presets as they are via a qualis qualiseur dbray internal need of some effects, compressor and speaker mod read too. preset classic rock-not be a cmodlisation prtends by SVT, but his is a "bidouillquot; s'insre that mix well in a rock and no more.
you really have any dbray effects, modlisations, and others to hear what must be understood: the modlisation by itself.
For cons, I do not know what it is other modlisations, so I left a post on the forum so that other li give their rsultast with such tests.

I use it for over 2 years now. Before I thought it had good sound,
but not really think that modlisations taient Fidler, especially as I have lamp prampli cot ...

Now APRS having at least one test, I can say that if I seek a well SPECIFICATIONS I could trust it ...
I tried other models modlisation: The Rocktron bluethunder, not too bad recording but sound too digital and did not convince me (prt by another bassist who sold in time before I myself shall decide, and then bass V-amp pro
which ignores my guitar (he used to make an impact on a keyboard) and I test: it is a scam! I could never draw a pleasant sound!
always a story of a comprmis between saturates, it is a brilliant dribble of crap ... etc)

report quality / price pod: I find it correct.
I would do, and this choice is a good product trs, trs soucis.et reliable and yet I walk.

haborym's review (This content has been automatically translated from French)

This damn USB port only serves to channel in the patch database of the POD ... that isnot very helpful!

but recently, line6 has helped develop a little app that allows you to directly connect the POD in the computer (via USB) ... isn't life beautiful?!

It's pretty simple to use, you turn, and then it's all good.
good, not hesitate to grind a little silly, is what to do ...
the creation of sound banks is a breeze, simply double click.
...

however, it should be noted that the effects preset factory are terrible terrible ... the best rest of it is creating a clean!
the manual is in English ...!
but if necessary, line6 provide a French version of this valuable guide, and I shall give a special thank you to the team of translators who translated the damn manual, go read a book, you'll see why ... lol

Frankly ... I don't see what to say ...
after comparison with a class A preamp, the accuracy of the sound is beautiful and the good, the proactive and a little behind ...
compared to a combo mid-range dynamics is roughly equivalent.

a small problem, it makes not too well ... or should slap hit hard
However, it depends of the effects used ...

After several months of use, I decided to sell it to move to any analog solution.

Overall it's pretty good, but also quite expensive ...

Matos sold as too complicated to use.