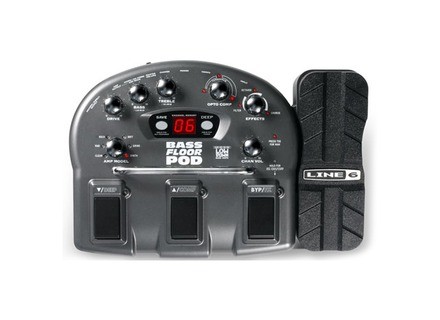 matmatah78's review (This content has been automatically translated from French)

Line 6 Bass Floor POD
5
64 available presets, amp simulator numrique, ditable but not via pc because no USB port. connections based on non-rack jacks 6.35

A pdalier pluttlger provided with a manual and super simple but sufficient. In short, effective rgler.

Line 6 is the quality to go, waiting for you 64 presets, and frankly at INTERESTED ism and original. I use a Fender Jazz Bass NT Miller to the pop / rock / jazz. The best presets are the most simplistic but the sounds 'weird' help provide an atmosphere.

I just bought this pdalier a week ago for my low light version of the bass pod xt live for lack of budget. I recommend it highly, I bought it on ebay Custom 169 euros fdp included trs and am satisfied. on the other hand no USB, no upgrade possible, and must delete the original presets to make his own. However possibility of finding them thanks a factory reset. Trs good choice then.
Did you find this review helpful?yesno
»

Flo Jobb's review (This content has been automatically translated from French)

Line 6 Bass Floor POD
2
Simulations of the basic type ampeg amps, modern British rock ... basic but reasonably well made.
Drive settings, bass, treble, high and low mids. It's not a 9-band eq, but it's not bad.

Chorus, bass booster, and wah wah effects in addition to other

Format pedals, so super convenient, at first a good tool for scene bassist looking to have multiple correct sounds without breaking the head. As I said, a priori ...

Using ultra simple, understandable without a manual for someone used to the pedals of its kind, and very affordable for someone who discovers.

This is where the bottom lies. Effects and amp simulations that could be huge if ... clean sounds does not saturate even with the drive to 0 when using an active bass.

Works very well with a passive bass, sounds nice, but not the height of what might get by with an active (which is infeasible).

A nice tool to start, but far from being worth the price given the huge sound defects.

Holders active low, go your way!
Did you find this review helpful?yesno
»

bassbaker's review (This content has been automatically translated from French)

Thats its default out the most .... Indeed, the possibility of not using effects without using an amp modlisation really tired, like the breath of the compressor that works yet a good basis ... Otherwise, it's a nice little pdalier which can render good service. I, it serves me well to practice at home with my mp3 and my headphones without noise for my wife!

Modlisation good, good sound effetsTout fits a hand how to use effects!

I've had a year and he is at home. To use it live, it should be that he has a true bypass and that we can use the effects without going through the pramp .... Then, it would be ideal .... pdalier . but it would probably more dispandieux!
Did you find this review helpful?yesno
»

Line 6 Bass Floor POD
4
Multi effects bass pod the game with amp simulation and three effects (Octaver, envellope filter and chorus) No USB to connect to a Mac or PC, but an output amplifier, an output record (DI), which simulates a microphone jack hp and a headphone output.

The config is really simple but effective editing sounds will have essentially the plaything're strong, brief but good. the only small default is that you can use the effects without the amp simulation, but they have good settings that allow them to make refined and discreet.

The sounds are extremely realistic and although the edition of the effects is limited, so those will have the essentials, which corresponded to my research. The realism of the simulation is bluffing amp and EQ that accompanies it really works.
I play on my 1997 Passive Warwick Corvette mounted microphone with an amplifier bartollini warwick ccl 150 with neonidium hp.

I use it for a week in the studio, rehearsal and already at a concert this week (room 1000 people) and I'm delighted. In addition, the headphone output also allows me to work at home or on the tour bus without having to connect a sound card and my mac to work with discretion. This machine is the Swiss Army knife of bass player with pro gear already in order to broaden his palette and accentuate certain song. I had already worked on a boss and an upscale digitech, and its sound quality and ease of use, bassFloor is really high above. It equals a bass pod losing the ability to fine tune but winning ease of use live.
Used for 89 euros is really a case and I would do this choice with your eyes closed.
Did you find this review helpful?yesno
»