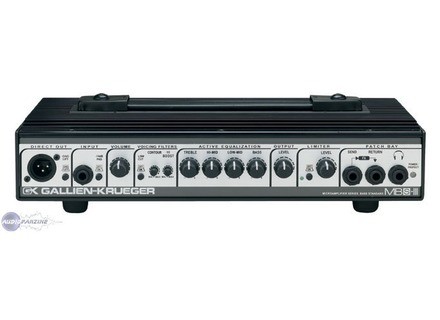 Basseman3's review (This content has been automatically translated from French)

Gallien Krueger MB150S-III Head
4
Prcdemment, I post a notice at the Combo version of this device
I just delete it to write the right place and with more exprience yet.

As always, specific on the specifications, the intressant can learn about the manufacturer's website.

In short: Transistor (solid state), 150 W on baffle (s) with total of 4 Ohm Impedance, no effects, except UNESCORecords enough connections:

Frequent flyers are also prvenus: you can not adjust the camera's different voltages that of the region o you purchased the head. (Eg when you prvoyez a tour in the U.S. ...)

In short: some others are doing better now

The amp is not overloaded with buttons, so a will ...

The manual is adequate but could be in part a little more specific on.
For example, the position of "low cut" is not indicated for examples of its DIFFERENT.

On a dark scene, the position of rglages "contour" and "high boost" should not be very obvious discovery order because the white markings on the buttons are missing / are too small

Readily obtained a good sound if succeeds table a reliable link between the head
and the speaker output jack .. with, not at all empty. I had to make several tries to get something viable (forward), same as using Neutrik original, is hard. The new head MB2-500 also has to Speakon now (but is still voltage supply network and has no fixed between auxiliary)

The sounds are excellent potential for the Jazz, Fusion (Slap Shot and good!) And always REFERENCES for bassists!

For the rockers, it should perhaps be seen elsewhere, but to practice these sounds are also available.

Two years ... a passage for the SAV knob "master" or "volume" and scratched compressor that produced bcp. of breath. For now, everything is good. Knock on wood.

Like it is relatively Lger, small and quiet (no fan!), But
Some points have to be for this series revissdj III (Speakon and possibilitbr /> to change between 110V and 230V between auxiliary CD ...)

The quality-price ratio can still be qualified as good as selling prices are reasonable view on the Internet for a U.S. product. On the power amps "SPS", sometimes there are still worries there will not be seen this model with its classic transformer.

I bought shortly before the release of the compact amps with "SPS" (except that MarkBass taient dj l - but not "my cup of thquot - now I look spoke rather as a different product if reliability is there.