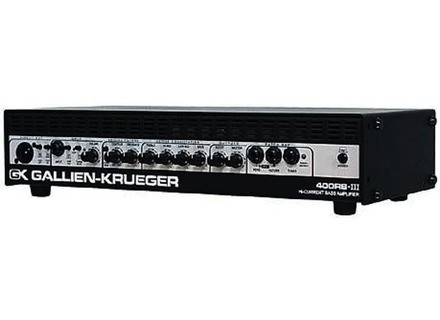 Gallien Krueger 400RB-III
4
The Gallien Krueger 400RB-III is one of the first bass amps I've ever owned, and it certainly stood the time of time for nearly a decade. It is a 240W solid-state amplifier that is relatively compact, but relatively powerful, and provides nice, clean, simple bass sounds. It can be rack-mounted or simply rested on top of a speaker cabinet, the amp comes with the included hardware to make the changes, including taking the handle on the side on and off. Speaking of handle, this amp can be easily carried with one hand, which makes it very portable, but certainly not underpowered. My buddy now uses this amp with a full 8x10 cabinet, and it powers that speaker just fine.

Even beyond bass amplification, this head can be used for many applications, including a PA or keyboard amplifier. It provides basic EQ functionality, and it can produce great sounds at very clean levels. If you want some grit, you can add it as well, with three separate gains/volumes available on the unit, you can adjust them as you please.

Gallien Kruger is one of the more famous non-tube bass amplifier company, and the quality of the sound definitely shows that. Because it is very clean and transparent, the character of your bass guitar and your playing style shine through. There is a basic EQ section, along with a presence knob for controlling ultra highs, and a contour knob to quickly scoop the mids if desires. There is even a voicing switch for 5-string bass guitars, which presumably adds more definition for ultra-low end.

Overall, the 400RB-III by Gallien Krueger is one of the best investments I ever made in a piece of musical equipment, It lasted me forever, and it still sounds great, up until the day I sold it off to a friend. If you can find one, be sure to check it out!
Did you find this review helpful?yesno
»

Gallien Krueger 400RB-III
5
I bought this amp head at Guitar Center in San Diego for $419. I needed more power seeing as though I only had an amp/speaker combo putting out about 100 watts rms.

Power ratting is unbelievable, I've played two relatively large roomed shows and never had to turn in past a quarter of the volume (powering one 15" speaker). Many equalization options!

Quality and construction is excellent.

Well known brand that's been around for a while with a product that that won't let you down... buy it!

Most versatile amp I've ever used. I play a different variety of music,(rock, funk, soul,blues and country) and this amp handles it all. I run it through a Peavey 4x10 and Peavey 2x10 and it was growly when I needed it for the rock and blues, clean for the country and slap easy for the funk and pop. I coulndt ask for more out of an amp. The power was awsome and I didnt have to push it too hard to get the sound I wanted. More head room and volume than other higher rated amps I've tried.

Very light weight and easy to set up. All adjustments are easy to use.

Great amp for the money. Handle any type of music. Couldnt ask for a better amp. Im a GK fan for life.

Gallien Krueger 400RB-III
5
I bought the Gallien Krueger 400RB-III bass head at Guitar Center (Houston, TX) for $400. I bought this unit because I needed more power at both rehearsals and gigs. Previously, I had played out of a Peavey 60-watt combo amp. Our guitarist had just gotten his Marshall half-stack, and I needed something more powerful to keep up with both him and the drummer.

There are so many things I like about the Gallien-Krueger head. First is its compact size. The 400RB-III unit resembles a VCR more than it does a bass head. Weighing in at a mere 15-20 lbs., lugging around the GK head is no problem. It even has a handle on the side of the unit to facilitate transport! What is also great about this unit is the many features it has. There is a tuning mute and a tuner input on the 400RB-III, which lets the bassist hook his/her tuner into the head. Whenever there is a need to tune during a set, one can simply turn on the mute, turn on the tuner, and tune the instrument without having to turn off the amp and unplug the bass. Another useful feature of the GK 400RB is its cooling fan. There is an open vent on the top of the unit, which effectively and rapidly circulates air in and out. Even during summer outdoor gigs in Texas, I have never had to worry about the bass head overheating and burning out. There is also a four band equalizer, which lets me adjust hi's and low's as necessary. In addition to the volume controls, there are also contour and presence adjustments, and even a bass boost option for bassists playing with 5-string instruments. Finally, one feature that I really appreciate about the GK 400RB-III is its PA direct out jack. I like how I can have the bass head directly linked into the sound system without having to run a mic to the speaker cabinets. This saves me lots of space on stage.

There's really not anything I don't like about this bass head. In addition to all the features I mentioned previously (some of which the higher-end models lack), it puts out an ample 240 watts at 4ohms. If there was one thing more I could want out of a bass head, it would be that it was 8 ohms, bi-ampabble. With the 400RB-III, I can only run it through a single cabinet at 4 ohms.

Solid state; no need to replace burned out tubes.

One of my best purchases EVER. In my opinion, Gallien-Krueger makes the best line of bass amps top to bottom. It is no wonder that many of the world's top professional and amateur bassists have chosen Gallien-Krueger to express their musical ideas.