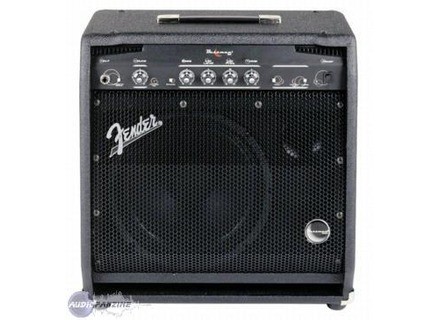 Fender Bassman 60
4
Aquired at Pearson/Mcfadyen music for about $260, new, as a practice amp.

When I first turned this amp on, I was surprised by the power of the output. Despite its low wattage, the amp puts out quite a loud sound, and the preamp is capable of driving a much larger speaker than the one it's built on to. The preamp also has a nice slew of features, especially considering the low wattage. In addition to the standard features(Volume, instrument in, Bass/Mid/Treble control) it has a second input for a preamped instrument, an audio line in for a CD player or whatever else you elect to hook up to it, mute switch, mid booster, and separate volume control for the audio line in. In addition to the controls, it has an effects loop, tuner out, line out, and external cabinet out. Very nice.

The sound quality is overall good, but it gets pretty noisy as it's cranked up, and loses some of its tone quality as well. It also could have been packaged with a slightly larger speaker, which I suspect would do wonders for the problems it has at high volumes as well. But, overall, a good unit, especially considering the small size and low wattage.

This amp has served very well, excluding a period of about 2 weeks where it fed back, the sound quality broke up, and generally failed to function at all. A guitarist and drummer executed a savage beating upon it following the interruption of a good rehearsal, and that solved the problem. I guess some component had come loose and they kicked it back into place. I'm not quite sure what this says about the quality of the amp, but I've decided to forget about it, since I never had a problem again.

Overall, a very good amp, which overcomes low wattage, small size, and a pretty low price tag to deliver a slew of useful features and a surprisingly large sound. For gigs it needs an extension cab or a PA, but it can hold its own in any practice, even with pretty loud drums.

Fender Bassman 60
5
I acquired this amp because I needed a new one to here over the drummer in my band I got it for $480 canadian an excellent price considering its a fender.

Surprisingly powerful it is just as loud as my friends 120 watt stage amp and it only has half the wattage. The enhance button gives a great funky sound that is extraodinary for playing funk, fusion and reggae.If you are playing in a metal band like me or any other fast aggresive style you can get a great powerful aggresive tone to give the bass a more percussive quality.Also has a great three band eq as well as the fact that it can be used as a head if you are to cheap to buy a head and speaker.

It is a little heavy especially when your carrying it around.

This amp is a beast this amp will never fall apart I know people who have had these amps and are still using them after 15 years.

Awesome bass, extreme power with both percussive and melodic capabilities, great for anyone who wants a great amp on a budget

Fender Bassman 60
5
I purchased this amp at Sam Ash. I had gotten a Squier bass pack before getting this and I needed a louder amp with better quality that would work for small gigs. I paid $385 for it.

I like it because it is loud enough for gigs and has great tone. It sounds great with slap and there is a special enhance button that enhances the sound of the slap to make it even better. It is also great for all style of music though. For $385 it delivers enough goods to easily make sure you got your moneys worth. I also like how you can push it back into a diagnal position because it is in a wedge design.

There is not much I can say that I don't like about it. When you have the volume up very high it buzzes a little, but you can only notice it if its quiet and your playing alone. Although during a gig you definetely cannot notice it. Everything else about the amp is great!

I bought the amp new and it came in mint condition in its box. The quality of the amp is superb as you can bang it around without damaging it. It's metal grille is great because you can't punch a hole in it unlike other amps.

I feel that I definetely got my moneys worth with this amp. It has great sound and quality and is loud enough for the gigs but is also great for practicing. If you ever move up to a louder amp this wedge designed amp can also be used as an excellent stage monitor.