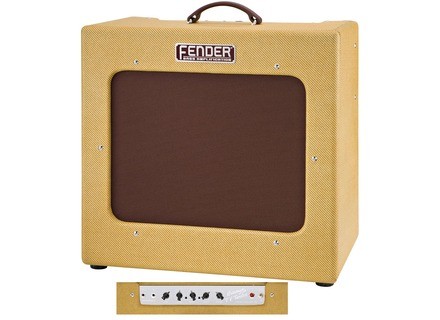 lofi83's review (This content has been automatically translated from French)" A little jewel!"

Fender Bassman TV Twelve Combo
5
Already said.
Before you read my mind know that I try to remain objective and I know enough amp to offer an opinion.
I put 9 because perfection for me was a headphone jack, despite the fact that we can play well at low volume (like the night in the apartment) but the problem you see, is that it is so good I can not help but play louder!

Ultra simple setup and my faith quite efficient: the EQ is very responsive. On a Gain knob and Volume, which allows us to have a more clean at least according to the volume of output. Two entries: one for the bass passive and one for active. Buttons "bright" and "deep" really affect the sound (I will develop in the "sound")
The manual it will be crazy.

Here is what has come to conquer me: It is good, very good even!
As I said the equalization and the two buttons really affect the sound (that feels good at high volume) and it is very handy in live situations based on "sound investment" of the bass in the group. This is a very appreciable and that the fabric can sound of the instrument.
So unlike aprioris that I could have this type of vintage amp, you do not end up with one but with his typed a real sonic palette once one masters the beast, so very good surprise!

I have a group of Blues and Rock and another amp meets my needs perfectly. Power level I've never had any problems yet our batsmen are strong! If you feel a lack of power with is that you do not know your whole set or you're making a big scene without being transplanted and in this case it is the sound engineer the idiots of the story ...
On low I have a Fender American Standard Jazz bass and a Cort Artisan B5. Let me tell you that I have THE sound is orgasmic! A friend plugged his warwick above, result: a potato hell! The amp responds very well to different characters that are low branch.
I'll stop there because I could go on and we will end up believing that I work for Fender ...

That six months that I use. And I really struggled to find this little grandpa, I was told that Fender produced the most and it is a shame for the brand once out something that would make a great lease my taste!
For the story before I had a Little Mark 800 in 4x10. Very big sound there's not to say it was good stuff but level character I must admit that this is really not the joy that is sorely lacking, I had the impression of being transparent ... Must love.
Then I went to Orange, there was immediately a sound something really special, recognizable! I would say it is the opposite of Markbass. But I quickly tired of her, just too colorful ... You say, but I'm not boring I wanted the middle. And one day I saw a guy on stage with a Fender Tweed: Slap! I wanted the same! And after several weeks of misery and miles (not fan of shopping on the net, bad experience ...) I've found. It's funny, but I feel that my game is embellished since I got it. Just to see the amp inspires me! And it's ...
Ps: in the "I tested for you," a pal plugged his Les Paul above story, and the guy is doing pretty good on a nice clear sound!

Brief summary:
The +
The Look (limit a decorative object!)
Sound and potato
The weight is light enough and powerful enough to live so cool
The opportunity finally sound may be more than most amps "modern"

Less
Uh .. It is more about the Fender site, really I do not care I already me!
To conclude: It is a matter of taste of course! I have discovered and you'll understand I was hooked. After there are others, each his own.

arx77's review (This content has been automatically translated from French)

Configuration is very simple, we get immediately a great sound. The equalizer is a passive circuit. Fender explained that each volume pot is connected to others, and when you touch a frequency, the other also act accordingly. It is very "present" as an approach, but suddenly the result is surprising.
In the manual there 's absolutely no indication. We must go on the net to learn that the controls "flat" (base position) are 2 for low, 10 medium and 2 treble. This is part of the passive mechanical.

As stated above, the sounds are really beautiful.
The amp has its own character, we feel right now. The sound is very vintage: a little low fat, natural mids and highs that are more to air the sound than anything else.
When you push the preamp, the sound becomes much cradingue, ideal for rock and blues. It feels much the presence of the lamp.
Contrary to what is sometimes said, it may well slapper with this amp. But you will never have his "base" of the slap, we used to hear and finally sound quite modern.
With an active bass, the sound is not as colorful as the bass takes over the EQ of the amp. For cons the advantage is that you can even pull the preamp and when you push the bass on the bass, there's an outright saturation very musical, in a low register of the most beautiful.
The black dot: not suitable if you want to play the big rock with two guitars that should be ahead. I do not know if the overall power, or the size of HP, but the sound is mixed with guitars rather than stands out. I have another group for which the PB does not arise.

Finally, be aware that I had an entry of 100 watts. I wanted a nice amp, I chose the latter. I'm not disappointed for the sound that is simply fantastic. Simply saw I was comfortable with 100 watts and no more, I thought 150 watts would do it. Well yes, except that in my rock band with two guitars that dashent, it no longer follows.
I would not necessarily raise me 30 kilos of tv bassman 15, but it instead if it takes your guitar play like deaf.
Last point, price. I bought a miracle to 319 € new in an operation of destocking. So I made a great deal. But beware it is expensive otherwise. To save and make the fact that small concerts. But imagine the power you need, it's one small hitch with this combo. 200 watts might have had for this jewel to become a standard (with a price drop of course)