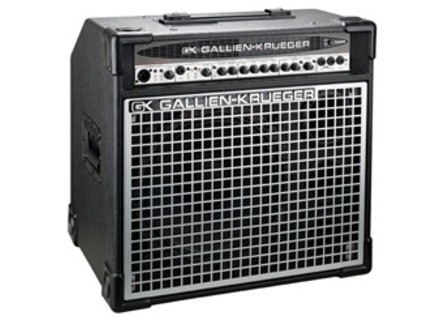 The combo is very powerful. Always used without an extension, and therefore 8 ohms, power is 350W, true!

The manual is clear and simple, it is a bass amp anyway!

The connection is complete.

For its simplicity and is very versatile. Let me explain:
The settings are very sensitive, we do not turn the knobs in a vacuum, the EQ is very responsive.
The basic sound is very accurate and powerful. To give an idea, I like the sound round and low med, but very often I should lower them, it sends the potato in the bass.
The presence I do not use it is already quite clear.
The volume of the amp acute separated either. Even for the slap that's enough.
Contour possibly can gradually move to a more widened to slap his example.
Boost allows "dirty", thicken the sound, that I use less than half.

All this that I would not say it is simple but it can adapt to all situations, room acoustics, exterior ...

I put 8 because easy yes and no, lots of options, excellent in all circumstances if the rule correctly.

I play mostly finger and a little slap, not a pick. Rather in the context blues funk soul with a guitar "all-tube" (fender Vibrolux) and a rather beefy drummer! The keyboard bump in its appreciated too. Anyway now I heard no problem. But if I did the metal and reggae I would find her too!
I do not even use most of compressor ...
What kind of sound you get and with what settings ("crystalline", "bold", ....)?
I like rather bold but not mushy, even the boost is accurate below half after it's an effect (although for that matter). So for me it is no tweeter, no presence, but with serious med calmed down and (?) Indoors.

I forgot to mention that I use a JazzBass Sandberg 5 string active / passive and passive Warmoth accuracy. With 2 is top!

I use it since 2006 but initially only for concerts, in rehearsal was what was there.
So I played the Ampeg, Trace Elliot, Hartke, SWR, Peavey ... Frankly though sometimes an old Peavy or Ampeg lamp were all very recent transistor amps were lame side. Note that I played with a clear sound (no overdrive) but Warm. The only one I've played all the other buries my taste is a big Aguilar, but it's all the same category.

Choice I would do if I turned over, then I use 20% of its potential, it is really more powerful than what I touched by repeating 350 w/8Ohm/1x12 "never fully ..! If I knew I would have taken her little brother!