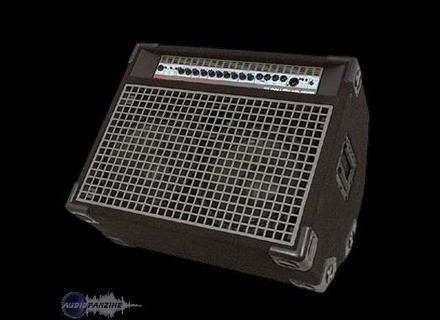 jpm.om's review (This content has been automatically translated from French)

Gallien Krueger Backline 210
5
The backline is an amplifier transistor 210 teams of two bowls 10 inches. It offers a 175 w power used alone. If the couple with a bowl suplmentaire, we get 300w.
It is equipped for everything you need for scne and studio effects loop, line out (with prpost qualisation), foot switch, tuner.
Opportunities are rglages compltes trs: 4 buttons qualisation: treble, high and low mdium, bass. Special features of GK: rglage a contour (not bad for the slap) rglage a "boost" (which gives the sound a lot of PCHE) and an overdrive of hell (I have the feel like a guitar when I use it, even if it is for me a gadget plutt).

Opportunities as rglages trs large, I have a while before finding one that suits me rglage. I think this amp can be used to find any bass sound that will satisfy.
There are few examples in the manual of SETTING THE qualisation guiding far departure.

I play in a pop / rock group, we have a broad range of compounds: reggae, rock, pop, ballads, etc ...
This amp sounds trs well in all styles.

If we want to harness the power of this amp (to be in 300 w, trs useful in concert) and really make it sound the bass (I play a Warwick Streamer LX 5 strings), it is essential to couple it with a 15-inch dish. I opt for a Hartke VX. It sounds fabulous.

I use this amp for over a year. He served for many concerts. I had no problems with. BMOL one: it is a bit heavy ...
I dj on jou Hartke, SWR and Ampeg. I prfre widely Hartke and SWR. For cons, I have a penchant for Ampeg, but when you compare the price, there is no comparison. At about 500 in thomman musicstrore or the ratio quality price of GK is for me the best available.
I rachrerais this amp without hsitation, recognizing the need to pair it with a bowl 15 inches.
Did you find this review helpful?yesno
»

ithibaut's review (This content has been automatically translated from French)

Gallien Krueger Backline 210
4
Gallien Kruger Backline presentation of 210. A mass production coming straight from the U.S.. It&#39;s a bit special because no one is not really a combo itself. It&#39;s a head inserted into a chassis. That backline 600 head. Sub-180W 8ohm and 300W sub 4Ohm. So 180W in normal use and if we add another cab, we go a 300W. - Full transistor amp, it heats well, and all the passive ventilation. There is however a small fan on top of security of the amp which gets under way in the event of poor ventilation. Me, he never started. on the other hand, as there is a hole covered by a grid very solid for this fan, you can not ask for beer on the amp, in case they are reverse = pafff the transition! -Construction is solid, a coating "carpet" covering the entire combo. I would have preferred a vinyl finish. A large grille protects the well-resistant HP shocks. A conventional handle on the top of the amp and two very well-designed handles on either side of the combo. Useful to carry two. 34kg, they must feel when 200m with the amp alone. Useful little trick, it can move into position "kickback" = mode its back. It is very convenient in cramped spaces or rehearsal concerts in bars or space is limited. The diffusion of the sound is even better. The amp itself. -Input jack with 3 buttons: active / passive (-10db pad) with an output mute tuner, to agree a silence without removing the plug from the amp and letting the amp on, and a selector cannal A / B (clean / distortion). For two-portare cannal overdrive. Volume and gain. -A gain / volume for cannal clean. -Contour filter to dig the mediums = innutile except for the salp and again ... .. 4-band EQ (hi / hi-mid / lo-id/lo). Simple and effective, that&#39;s what we found on the biggest names in the bass (markbass among others) knob-a boost which is great. It&#39;s like putting the cornstarch in the sound, the ca thickens (yeah!) and a master volume. -Output jack in / out for the effects loop Tuner-output (in agreement with the mute switch) -Output cannal footswitch for clean / overdrive. An XLR-out switch with pre / post-EQ and ground lift on / off. On the back, an output to connect another cab. The power cable. Two HP-10 " For me, these are the best characteristics of all amps of this price. Except that I wish I had a compressor much more useful than the filter edge.

That&#39;s a lot of buttons! But it is very easy to use. One branch, hop Pasivas with my Fender P-bass (4c), active with my Warwick Corvette $ $ (5c). Is switched ON. I was scared the first time I used it because the light stays red 5sec and then turns green. It&#39;s such a power, it must be preheated (it&#39;s still shorter than a light amplifier). I leave the mute turned on so I can turn my amp without having to plug in my bass jack. It breaks the circuit to leave a mute, so it does not damage the preamp. The knobs are tight and not too "soft" when turning, not too "hard". The manual is in English. It&#39;s not a pbm for me. The amp is heavy, it&#39;s big, but it is a guarantee of quality.

I&#39;ll start to give guidance when cannal overdrive. We must manage the volume of the channel and the gain level. A low gain and high volume (we can compensate by lowering the master volume), we get a very slight saturation typical amp lamps. Pushed a little harder, or is Oerkill Ace of Spaces Motörhead need to resume. In his last corner, it&#39;s Metallica Anestesia (Clliiiiffff BurtooOOOoon!). The sustain is greatly extended by the distortion, and tapping legatos endless, natural harmonics, and if you master the atrificielles sound too. I initially I thought the overdrive channel as a gimmick, but over time, put a small saturation in a group tend to rock, we drilled the best mix without having to watch the volume. The cannal clean now. A volume / gain, which pushed a bottom (+ 3H) is saturating the cannal ... clear / But you have to look too! The 4-band eq is really good, and to better define the sound that a band 3 or a 7-band low-end. The boost is probably the reason I bought this amp. Moving from the neutral has a colored sound, but really powerful! It makes the full, complete and responsible. For the boost, really, it transforms itself every sound, the colors, it&#39;s like a real amp lamps. It makes much the same services as a pedal SanAmp. Then the master volume master volume which is what! The HP 10 "respond very well to slap, they are fast and loaded with good bass. It versatile enough for me great.

I thought I would have a montsre power. In 8ohm, 180W, it&#39;s done is to repeat the top group with a drummer who hits and doubles in strength, and scratch with two 50W lamps each. Has pushed back, it really depot, there are plenty of air coming out of the bass reflex. In the end this account, all is well in this amp, I&#39;m really not disappointed. I wish I had a compressor, and the footswitch for the selection of channels is not provided ... damage. I tried some other amps before. Hartke 100W with a 15 "away urgently. A Fender Rumble 100W with 15", but not so well defined. With a Fender Rumble 210, and I almost fall for that one. It is really good, but does not have all the gadgets of GK. And Hughes and Kettner basskick a 100W 15 "which left me on my hunger, low draft and not high-mids.