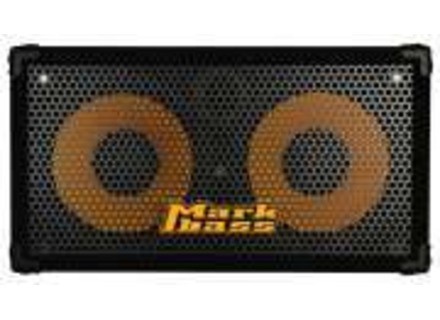 All user reviews for the Markbass New York 122

Baffle fairly neutral to my ears, very defined and precise, extremely dynamic.
The tweeter breath a little, like any other, but what I do not use it, so do not care.

I used it for 2 years with an Aguilar TH500 head, before that I had an Ampeg 410 HLF, a real shit that was eating the sound of € 3,000 of stuff upstream.
Since the uses I rediscover the sound of my gear, and high dynamic clarity, quite faithfully reproduces what is sent to him without hesitation: it may be clear, bold ... all depends on the sound I model upstream .
Despite of its rear port is capable of much (too) serious burr and can cross a mix and find his place in a group sound, the sound is excellent projection.
I do a lot of concerts and small footprint and low weight: thank you.
I play mostly pop / melodic punk and I can truly send my race with.
The fact that it is 4Ohm allows using the power of my head TH500 (gain was 12 and the master at 9am it's already too strong, and I play opposite of Marshall 100w lamp)
Time to defects:
-this is not a 412 (my reference speaker is 412 Mesa, the best baffle tt times but too bulky and expensive, hence my choice of MB as I move with bcp);
- The rear vent is not what we wrenching guts to vomire a groupie but in return we gain clarity and definition, investment in a group.
-there is 4Ohm, so on most head you can use it alone, I would have liked to add to it a 15 "to send even heavier
In short, a good choice, a good speaker but used almost exclusively as a standalone.
Kisses

Markbass New York 122
4
I bought it for its power 800 W.
I use it with a head marckbass Little III.
I use it in concert and BPS, but for a next record.

The sound is perfect, not a breath, my curve is frequency drives are still prcis respect and dynamics are the ... is the Markbass!

I use it for not even a week, I used to live in a room that can hold 1500 people.
What I like most is the power dvelopper for a 2 x 12 ', weight is 22 Kg only, and with its low mdiums and breathtaking.

What I like least is that it is 4 ohms, which limits the configuration with the other speakers.

QualitPrix level is quite expensive but the quality is largely l.

I would do this choice!

toff2aix's review (This content has been automatically translated from French)"the ideal cab?"

Markbass New York 122
5
Aaahh New York 2x12 "Markbass home .. since the time that they were waiting, that one! I had the privilege to offer me then, little review ...

I was looking for something that is both powerful, but also defined in terms of sound, especially as light as possible. He also had either versatile game as well as big again with a group of stoner (2 scratch deaf-blind knobs that grow all of their 2 bodies in Orange 4x12 donf lamps, a singer / screamer / beugleur hysterical and a drummer&#39;s syndrome Tourette&#39;s terminal that ...), or smaller club committee (playing in a trio of blues rock concerts in cafes etc.. but need a lot of power for gaming trio, too ..)

Do not sacrifice quality and power of sound to light? Challenge a priori impossible (this is the big problem of bassists), but I thought immediately markbass for power to weight ratio. I headed instead to a combo version (cmd 121h, 400w 1x12 inches) but a huge pot shot made me have a head over this baffle Little Mark III for a price of just over 250euro in nine ... I did not hesitate for long: I go into 4ohms 500Watts with that (the limit LMIII me then), but ... let&#39;s say that&#39;s enough ^ ^

then let us be clear: I had not tested this front baffle (Because nouvôté absolute), but I had read and heard on various forums markbass users that the ideal would be an 2x12 inches. I actually tested the 15 inch (impressive too, but sometimes lack potato and defining certain frequencies where high volume that "drooling" a bit), also configs type 4x10 inch: there was an inverse problem: very aggressive, but less well made bass .. not to mention the weight! When testing the 12 inch, but I myself were rubbed on a small combo: lack of definition in the midrange. Version "cmd 121h" (higher and heavier) seemed a priori correct the defects of his little sister, 121p.

It was argued therefore that the 2x12 is a good compromise that would require power rab &#39;. Often though, those who play on a 12 inch "solitary" seeking to add a second later (it is CMD 121p, or 121 in NY 1x12 version is planned for parallel can be put as 8 ohms)

After test (2 repeats about 5 hours each) I can not say I know all the stuff, but I got it the most important: this cabinet is clearly a good option "for those who can afford it. I play it with a Warwick Corvette Proline 5 cords (microphones guys assets), and tetra Blade JB 4c (also active) and the first surprise (beyond the fact that it sends severe): the first speaker / amp that do not tailgate a bit when I put him in full of cum (with the SI severe warwick example ...): amazing, you play a note, all knobs in neutral, power and gain at 9.00 (one quarter. . that&#39;s enough, even with the excitation band called "Group" next to me and that puts the full cabeza for ages ^ ^) and boOoom: the end of the world falls on you.
Clarity, strength, definition, presence ...

I also will place a tube compressor (EH Black Finger) upstream, it can warm up the sound, and the channel: this is not a luxury, rather a bonus even on this type of amplification and ... with the kind of bass I play.

Clear sound, the slightest change in the adjustment knob on the bass tone is immediately audible (it&#39;s a very good point), we get very quickly what you are looking for what little we know want (you follow me? No? will review your ear!). And at the same time it multiplies the possibilities ...

Very low frequencies are reproduced by-fai-ly (aahhh it that serious!): This thing down to 45 HZ anyway! as good as 15 inches (some go lower, I know, but me it&#39;s enough for me), but more of punch and definition. We can also talk about neutrality (with perhaps a slight color "markbass" if you set the wrong équalo on his head): I totally rediscovered the example of the bridge pickup of my Blade, an active preamp Levinson that sounds very low mids and fairly, many more mediums that emerge in the ear speaker on this, its just day and night with Hartke example! It was as a part of the sound spectrum was part of my mics to make a turn and came back ... I took myself to limit Pastorius (Jaco to 5 years eh, not end of career!)

Power question, I already said in 1 / 4 of my stuff is enough in a local repeat with big stuff (+ PA) at a time drummer I retried the trick "I have a Godzilla crisis "(though it was quiet recently ^ ^), so I pushed the volume to 10 hours: a miracle! it calmed the direct and effortless: what you ask for? And above all: it does not blur even if we push a little Chtit ... just to see what!

then of course I have little use for now, but what I glimpsed (in it?) clearly reassured me about my choice: Other musicians have also agreed that change is good , more and less to me now they will look down on two psychopaths with their Orange 4x12 Tube eh! (If you&#39;re reading this you may know and WANT: WELL DONE!) Fear has changed sides ahahahahahahaha ^ ^

Beyond that, it was mainly to have a good sound, well-defined, well that pierces the middle of all this mess (if you see the local repeats you would understand ..) with a power weight mastered ( jvoulais not something that exceeds 25 pounds, it was said.)

Result? The poor Hartke 120 watt combo it replaced was heavier than this marvel! And I mean that weight level, upgrade its eh .. this has nothing to see (hopefully anyway!)

I post back further experience later, but one conclusion: if you have good instruments, the speaker will sound, no worries! After it is always better to try before you buy (especially at this budget level ^ ^) because Markbass Markbass sounds like ... (yes I know it means nothing but the truth is, like some others do not) .

Only small problem: the tweeter has an independent adjustment on the side, but the knob is loose during transport he had turned to max gain without my realizing it, resulting in a breath test first rather embarrassing (and creepy). Upon inspection, I found the problem, turning the volume pot to its normal position, plus a bit of breath. So I turn a star for this "detail", they would still have put a knob a little harder to turn to the price, whatever!)

In final summary, the value for money seems good, and justified .. anyway in conclusion: IT DOES. AND GRAAAVE